Tamiya November Release
By Ralph Emerson M. Dabao on Monday, November 08, 2004 - 01:58 AM UTC
Once again, Tamiya has release it's new items in the modeling world. The release consist of 4 new kits and 7 limited release. 2 for Motorcycle Series and 5 for Military Miniatures Series.

I must admit to be a little puzzled over these new releases - they are marked on the website as 'October' releases whereas in fact they are for December...

Verlinden's New Releases for November 2004
By Jim Rae on Friday, October 01, 2004 - 09:34 PM UTC
Verlinden Has just announced its usual mixture of releases in a variety of scales, themes and categories....

Osprey Modelling Series - Future Releases
By Jim Rae on Wednesday, September 29, 2004 - 04:32 PM UTC
Osprey Publishing has, in addition to their well-known books on uniforms, AFVs, Fortifications and Military history, also have a range of extremely useful books dealing with the modelling of particular vehicles or aircraft. The coming months will see the publication of some new and interesting titles in this series...

New Verlinden Releases for October 2004
By Jim Rae on Thursday, September 09, 2004 - 09:41 PM UTC
October brings us the usual mixture of new releases from Verlinden Many of the new releases follow a well-trodden path, others (such as their M10 Trailer) are very welcome indeed....

Two New Dragon Releases
By Jim Rae on Wednesday, August 11, 2004 - 01:04 AM UTC
Two new releases have been announced by Dragon Models. One in their 1/700 Warship series, the other in their ever-increasing 1/72nd scale Armor series..

July 2004 Release Schedule.
By Jim Rae on Saturday, June 26, 2004 - 04:34 AM UTC
July will, once again, see a considerable amount of new releases from Osprey Publishing. As usual a plethora of periods and interests are covered from the Zulu Wars to Zeppelins. Truly something for all tastes!

Osprey's June 2004 New Releases
By Jim Rae on Thursday, May 27, 2004 - 02:53 AM UTC
Once again, Osprey Publishing has announced a batch of interesting new titles. Covering everything from Crusader Castles to Soviet Armor, from WWII Infantry tactics to the Hussite Wars, this list of new titles will have something for everyone....

Last chance to buy Letraset Military Decals
By Rowan Baylis on Sunday, May 23, 2004 - 06:46 AM UTC
Mole Military Miniatures have purchased the entire remaining stock of Letraset Dry Print Decals. The decals cover Aircraft and Armour subjects and are available in 1/72 and 1/35 scales for the most part.

New Titles From Acción Press
By Jim Rae on Friday, May 21, 2004 - 04:38 AM UTC
ACCIÓN PRESS have announced two new titles, one for the armor modeller and the other for the figure builder...

Osprey New Releases - May 2004
By Jim Rae on Friday, April 30, 2004 - 03:15 AM UTC
Once again a large list of Osprey releases this month. It is worth noting that the closer we get to the 60th anniversary of the D-Day landings, the more books there seem to be on Normandy.....

Osprey Titles For March 2004 - Part Two
By Jim Rae on Friday, March 26, 2004 - 07:27 AM UTC
Osprey Publishing has to be easily the most prodigious publisher in the Military History field. Once again no less than twelve titles are to hit the bookstores...

Osprey Titles For March 2004 - Part One
By Jim Rae on Friday, March 26, 2004 - 07:23 AM UTC
A very mixed bag of titles from Osprey this month with something to capture the interests of everyone.

New Titles For December
By Jim Rae on Sunday, November 30, 2003 - 08:42 AM UTC
Every month, I receive Osprey's newsletter. Every month it seems there are more and more titles which I need, want or simply would like to learn more about...

Sd.Kfz 8 with 8.8 cm. Flak 18
By KOSTAS on Wednesday, November 26, 2003 - 02:40 AM UTC
Crielmodel, one of the leading Italian resin kits manufacturers, has just released an impressive resin kit depicting the above mentioned 12 tons German half-track.

Even More Academy Releases
By Jim Rae on Friday, November 14, 2003 - 06:22 AM UTC
I have just been in the Academy German site and saw some rather nice new releases...

Aces Releases 1/72nd scale IT-1 Missile Tank (1:72)
By Ace Models on Monday, October 06, 2003 - 11:04 AM UTC
ACE company has just begun production of a 1/72 scale post WW2 Soviet Tank Destroyer IT-1, the only mass produced missile tank.
Some historical photos and few photos from a Kubinka posted to our page:

1/35 Sniper Villa kit for WW2/Special Forces (1:35)
By smitzer on Tuesday, September 02, 2003 - 09:00 AM UTC
British company SASmodels.com has just launched its first-ever kit for diorama builders - a half-destroyed farmhouse in 1:35 scale. It's called Sniper Villa and aimed at anyone building WW2 or Special Forces scenarios.

READ FULL STORY ( 5608 )
Hidden & Dangerous 2
By Aragorn on Wednesday, July 30, 2003 - 07:58 AM UTC
Hidden and Dangerous, released by Illusion Softworks in 1999, will soon have a followup, Hidden & Dangerous 2. While not available world-wide this new game looks to have some amazing rendered graphics and unique gameplay.

Verlinden July Releases
By Danny Wennekes on Friday, June 06, 2003 - 08:34 AM UTC
Verlinden has scheduled no less then eleven new releases for july 2003. Different figures from Napoleonic times to the Vietnam war and also a couple of detailsets.

Verlinden June Releases
By Aragorn on Sunday, May 04, 2003 - 03:49 AM UTC
Verlinden is going to release 10 new products for June. They include several new 1/35 scale figures as well as a detail set for the DUKW. Read on for the complete list.

READ FULL STORY ( 6324 )
Gathering releases VIETCONG!
By SCUDHunter on Thursday, May 01, 2003 - 08:01 AM UTC
Computer and video game publisher Gathering, a subsidiary of Take-Two Interactive Software, Inc. (NASDAQ - TTWO), and developer Illusion Softworks in association with development team Pterodon, announced that VIETCONG for the PC has shipped.

VIETCONG, an intense first-person shooter with tactical elements set in the Vietnam War, is now available in stores nationwide and will be available in Europe on April 11th. "VIETCONG transports players to the South East Asian battleground through stunning graphics, intense sound effects and complex missions," said Kelly Sumner, President of Gathering. "This action-packed title will have players riveted as they navigate the varied terrain and constant threat of the jungle war zone."

Verlinden April Releases
By Aragorn on Tuesday, March 25, 2003 - 10:15 AM UTC
Verlinden Productions has released about 10 new products this month.

Battlefield 1942 Expansion: The Road to Rome
By Aragorn on Wednesday, February 19, 2003 - 03:39 PM UTC
A new expansion pack is available for the PC game, Battlefield 1942. Called "Battlefield 1942: The Road to Rome, this module lets you play key campaigns in the Italian campaigns of WWII. Players can choose to fight on six new maps, including Operation Husky (Sicily) and the battles for Anzio and Monte Cassino. Each map comes with highly detailed environments such as Italian houses, Mediterranean trees, and even the Monte Cassino monastery.
Controllable vehicles are the heart of the Battlefield 1942 experience and The Road To Rome features eight new vehicles in addition to the more than 30 available in the original title. These include the German Bf-110 and British Mosquito twin-engine fighter bombers. Also debuting are an Italian torpedo boat as well as British and German tanks and antitank guns.

READ FULL STORY ( 6295 )
Military Prints by William Tait
By James P. Welch on Sunday, November 03, 2002 - 04:19 AM UTC
Smarten up those drab walls of your workspace, have charming attractive women drawn to you immediately by your oveerwhelming sense of good taste. These military prints are exectuted by the talented hand of artist William Tait, artist with 25 years of experience behind him.

Modelpoint have just released the first volume of the CD based reference system they have been working on for the past few months. It has a really user friendly menu  just click on the topic  all the pictures are on the right of screen you just click to enlarge & the manual pages on the left. The pictures are either taken by Modelpoint or from official technical manuals or rare archive pictures. I have only dipped into the CD but looks excellent!

Accurate Armour announces that they're accepting advance orders for their M114 model which will despatch to customers at the end of June. The M114 can be build as a M114A1 or M114A1E1 Command and Reconnaissance Scout Vehicle. The kit includes a 50 Cal Machine gun for the A1version and a 20mm cannon for the A1E1.

Fine Molds has announced plans to build a 1/72 scale version of Obi Wan's Jedi Starfighter from Star Wars Episode II. This will be the third in their series of highly detailed ships from the Star Wars saga. Prior to this model they have release a T.I.E. Figther and X-wing Fighter, both in 1/72 scale. The Jedi Starfighter will include the hyperspace drive unit which allows the ship to travel at hyper-light speeds. The projected release date is July of 2002.

Dream Catcher goes to War
By Jim Starkweather on Tuesday, May 21, 2002 - 11:08 AM UTC
Just when you thought it was safe to peek into your storage room, Jack whips up another new release. This latest, is a three man recon team form the IDF. It is called "under fire" and I can say I love it, since I did not sculpt it! I asked my sculptors to work hard for realistic poses. I don't care how long the figures take as long as when I get them, I want to paint them yeasterday! I like em, and I think you will too. Check out the image here!

Itchy Wheels
By James P. Welch on Saturday, April 27, 2002 - 05:55 AM UTC
Replacement resin tyre set for the Ural 4320/BM21 kits. These are resin cast slip ons I'll post photos this week. But they are yummy!! I've already put into production the next three sets. Due out in May will be DCWP 012 Gaz 66 replacement resin tyre set, and DCWP 013 BTR 152 Replacement tyre set.

Just received news about what appears to be a SUPER fantastic, cool, (well you get the idea!) trans kit for the Italeri M984 series. I think this one is destined to be a winner, and I'll update you when I receive the kit which is in the post. Just couldn't wait to share the good news. The set is done by a Flemish modelling club here in Belgium. Mastered by Dirk at pro-art models. A work of art it is. Cast in yummy white resin, this looks good enough to eat! I'm going to rake in a few for my shop as well. These are the kind of kits that make the modelling world buzz and humm. Looking eagerly forward to their next release. 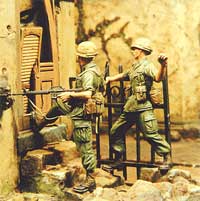 Jaguar recently released a double set of vietnam period grunts. They are depicted dispensing with any pretence of any hearts and minds policy. This is more in the lines of S&D mission. These guy's, at first, look a little wierd anatomically, and I'll probably twitch them a little to get the pose I'm looking for, but then again that is generally S.O.P. in my workshop! The equipment and details are sharp, I would however question the tactical logic of standing in the doorway in front of someone about to toss a hot tomatoe into harms way.