Crisis 2002 - Antwerp, Belgium
By HeinzKetchup on Tuesday, July 23, 2002 - 10:29 PM UTC
Crisis 2002 is Belgiums largest wargaming show, to be held on October 26th 2002 from 10.00 till 17.00 in Antwerp. More than 40 international traders will be present at the show as well as wargaming clubs from 6 countries who will play historical and fantasy demonstration games on 25+ tables. Besides that there is also an open painting competition and a 2nd hand shop. To top it it off there is a fully licensed bar on the premises.

Passion Modelisme - Montreal
By luc desormeaux on Saturday, July 20, 2002 - 10:41 AM UTC
On January 19th 2003, the second edition of "Passion Modelisme" will be held at the Radisson Hotel in Longueuil, Quebec, Canada. It's a show / contest that centers around 15 modeling clubs. The goal of this show is to promote the passion of model building for everyone, young and old, and to develop interest in this art.

Jakarta Model Expo 2002
By DeltaMike on Thursday, July 11, 2002 - 11:30 PM UTC
The Peter&Partner Jakarta Model Expo is our annual model festival here in Jakarta, Indonesia, going through 8-14th of July 2002. 150 model kits from our local modelers are displayed with varius models from armor, aircraft to Gundam. Including a giant 180 x 85 cm diorama of massing German armor heading towards the Battle of Kursk.

Best of Show for DGeraths' Dio
By Jim Starkweather on Thursday, June 20, 2002 - 03:02 AM UTC
DGeraths' Dragon Wagon diorama has won the Best of Show - Contestants Choice Award at the recent IPMS Lt. Alexander Pearson Invitational held on June 15, 2002. More images of this event are on display here. We are all very proud of Dana for his excellent work on this project and for sharing it with us (and other modeling sites) the way he did.

DAMS Fest - Sept 14th
By pwhite on Friday, June 14, 2002 - 02:05 PM UTC
We would like to anounce that we at the Dallas Armor Modeling Society, D.A.M.S., will be holding our first annual DAMS Fest Model Show. It will be held on September 14th, in Richardson, Texas. The show will be for ALL modelers with complete
categories, but concentrating on ARMOR!! We have several sponsors including Tamiya, and the US Navy. Click Here for more info. And Here to contact them.

Scale World 2002 -Belgium
By Marcel Kolsteeg on Thursday, June 13, 2002 - 06:05 AM UTC
On 8 september an event called Scale World will be taking place at St. Armands Hall in Geel (Belgium). There's gonna be a contest, clubstands and kit-sales. As special guests Tony Greenland and Phil Stutcinskas are announced. 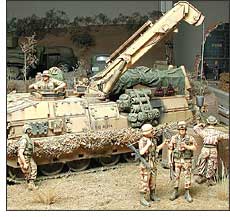 On 8.Jun.2002 an international plastic model exhibition took place at the technical museum in Brno (CZ). The show has been organised by the local clubs KPM Brno, DDM Junior Brno and the technical museum. After the first shock caused by the exchange rates we soon got another one caused by people in soviet WWII uniforms who were located with weapons and equipment at the entrance of the exhibition. Luckily these women and men did not belong to a unit which was not informed about the end of the war, but were from a group of local reenactors and responsible for tickets-sales. The show consisted of the model exhibition with contest, kit-sales, airbrush and RC-model presentations. It was not possible to visit the museum.

Pics from Concurso AMT - Torrent 2002
By Jim Starkweather on Sunday, May 19, 2002 - 01:19 AM UTC
PanzerNet has posted some excellent pics of an event in their backyard, Concurso AMT, Torrent (Valencia) 2002. You can view them here. The event looks to have attracted modelers from all over Europe.

Now it was for the second time that this big German exhibition and contest took place at Nürnberg/Germany. It seems that the troubles that led to the relocation from Erding to Nürnberg have not yet been overcome. Some well-known German modelers did not show up. But despite this the quality of the exhibits (especially on Sunday) was very high. Due to the fact that this was a two days event, at Saturday there were not so many models yet in the competition, but already all of the traders were present. This was an offend to all of the visitors, who tried to avoid getting poorer and poorer after buying kits after kits. So thank God its Sunday was the motto for all those, who were eager to be able to see more high quality competition models (, which showed up finally,) instead of spending the day with shopping again!

Photos can be seen at:
www.panzermodellbau.com

William De Coster (www.prinzite.com) has contributed over 100 photos from the Lier (Belgium) 2001 event. There is a wide assortment of photos here including, armor, figures, and aircraft. The 2002 event will be taking place on December 8, 2002 in Lier (near Antwerp). The event generally sees more than several hundred entries and even more visitors. For more information see the IPMS Lier site.

This was one mighty fine place to be. If you were anywhere else in the universe, you made a mistake! Besides the consumption of exceedingly good French cuisine, served by glamorous, long legged French demoiselles, and copious amounts of the national beverage, you also missed out on the rantings and ravings of mad Jack and company discoursing on everything from the creation of the univers to........modellisme. The competition was top notch as you will see. The company was the 3 star variety, and a grand time was had by all. I HONESTLY consider this one of the finest, and certainly the most fun shows in town! Gallery pictures.

Mosonmagyarovar 2002 Event Pics
By Jim Starkweather on Sunday, April 14, 2002 - 10:24 PM UTC
Wolfram Bradac, of "The Luftwaffe in Scale" (www.rlm.at), has taken some amazing pictures of a model contest in Mosonmagyarovar, Hungary (April 12 & 14, 2002). There are two pages of photos. Make sure to click the link at the bottom for the armor photos. There are some truly awesome dioramas there by Dietrich Wolf, George Schachinger, and our own Werner Kampfhofer! Here is the link.

Tamiya/Con 2002 Results
By Jim Starkweather on Saturday, April 13, 2002 - 12:54 AM UTC
TAMIYA/CON 2002 has come and gone. You can check out the results on the Tamiya homepage or here. Taking home the highest honors of Best Finished, Most Creative, Director's Choice, and Master Modeler from Tamiya/Con 2002 were Steve Kays, Gene Kozicki, Dennis Weaver, and Dale King, respectively.

SuperCon 2002 IPMS Ft. Worth
By Pete Becerra on Sunday, March 31, 2002 - 10:37 AM UTC
The IPMS Fort Worth Scale Modelers are holding the 2002 SuperCon on August 10th at the Arlington Community Center in Vandergriff Park. Squadron Mail Order will also be holding it's Open House during the same weekend in Carrollton, Texas.(which is about 30 miles away). For more information please read on and or check this link.

Swiss Show - Late Aug
By James P. Welch on Saturday, March 30, 2002 - 07:53 AM UTC
We shall be participating at a show in the lovely Payerne Valley in Switzerland. The show shall take place the last week-end of August, 2002. It is organized by Heer Schulé of the Payerne tourist board, and it is always a fun time. Fondue and Swiss french on ice.

AMPS Only 6 Weeks Away!
By Jim Starkweather on Monday, March 04, 2002 - 12:52 PM UTC
The AMPS site has put out an update on AMPS 2002 which is being held on April 19-20 in Harve de Grace, Maryland. The event is being held fairly close by The Aberdeen Proving Grounds (APG) but there have been increased security changes on the base and they will not be allowing civilians on for tours of the facility. Those carrying valid US Government ID's can gain access however.

IPMS Richmond - News/Pics!
By Jim Starkweather on Saturday, February 09, 2002 - 09:12 AM UTC
Several hundred modeler's decended on Richmond this weekend for the 2002 IPMS Richmond "Old Dominion Open". The battle-lines were drawn. Tanks were laid down in neat lines facing off against F-14 Tomcats, Kubelwagens, and '57 Chevy's. And the winner was?...

Back to the Beach for the 2002 IPMS Nats
By Jim Starkweather on Friday, December 28, 2001 - 01:13 PM UTC
The 2002 IPMS National show will be held in Virginia Beach, Virgina by the Tidewater IPMS and the Hampton Roads Scale Modelers. The event will be held July 31, 2002 through August 3rd at the Pavilion Convention Center. All the details of the event are still being worked out but you can find the latest info on the official Web site, 2002nats.tripod.com.

AMPS (The Armor Modeling and Preservation Society) will be holding it's eighth annual National Convention. It will be held at the same location as last year, the Havre de Grace Community Center, on April 19-20, 2002.

Tamiya will hold their annual model show and competition in Aliso Viejo, California on April 6th and 7th of 2002. The event takes place at the companies US headquarters near Los Angeles. 4 modelers will win all-expense paid trips to Japan, to visit the companies corporate HQ and the Shizuoka Hobby Show!