Scratchbuilders!
Built a model or part from your own materials lately?
Hosted by Mike Kirchoff
Official EOD Campaign thread

WWW
VonCuda (Hermon) said
Ok ladies, I'm a few hours late but hey, most of you are probably drunk and don't care. This is the official EOD campaign thread and the campaign has officially started as of today!

You all can use this thread to post pic's of your kits as well as any and all progress shots during construction.

Soon as the rest of my parts arrive I'll post a pic of my kit, my plans and all the goodies I'm gonna glue together.

That's it! Everybody have fun, kill zombies/aliens, etc. and make sure to pick on one another at every opportunity.

PROFILE
Wolfsangel (Charlie Wegman) said
So after the earlier witty banter, I think I'll keep building the Cuda as planned but use it for the Chev vs Mopar campaign if that's good with y'all. I saw a 1/24th L.A. Fire Truck/Wrecker thing on clearance over at my local Hobby Lobby that would make a good support vehicle, so maybe I can score that this week. Failing that, maybe I can get one of those Trumpeter 1/35 support truck (I forget the name of them but they have a COE set up with a cargo bed on the back) kits and do something dangerous with it. On a side note, they actually build the 1/1 trucks right down the road along with the armored deuce & halfs or 5 tons that they use now instead of Humvees. Those look Zombie-Proof. I want the real one of those.
Be fun to drive in rush-hour too...
Let me know about the Cuda,
Charlie

PROFILE
GaryKato (Gary Kato) said
I made a photo gallery for the campaign.
End of Days Photo Gallery

PROFILE
mtnflyer (Guy) said
I'm going to stick with the heavily armed M-113 as per my post on the old thread. The project was started Sunday, August 15, as per the photos on that old post, and is now underway.

Basic EOD project is slated to be a heavy hauler based on the stretched M3 Halftrack chassis. I plan on playing it by ear on the overall design. However, I am going with an up gunned field-modded vehicle for scavenging. The lack of a real design plan should work well with this.

The Mutt is the eyes and ears of the heavy mover. I plan on making it into something along the lines of a road warrior vehicle; added superstructure and gun stations.

I'm still leaning towards the two vehicles encountering a group of horse riders, probably Native Americans.The horses are not shown but I'll draw them from my stash of DML, Tamiya, and Italeri horses.

PROFILE
Tonyfr (Tony) said
Instead of building the Willy, I think I will mod a HMMWV buiding a second shooter compartment in the back.

PROFILE
Tonyfr (Tony) said
Oh yeah, forgot to mention it will also be my continuation of my build from the WHAT IF campaign last year. It will be part of the KISS ARMY.

WWW
Loobes (Lewis) said
I will continue with the M113/Bigfoot cross over which will contain 30-40 weapons, more a kit bash but there will be scratchbuilding such as nuclear missiles, bridges, hooks, a few personalized weapons etc
It's weird that photographers spend years or even a whole lifetime, trying to capture moments that added together, don't even amount to a couple of hours.
~James Lalropui Keivom

PROFILE
Wolfsangel (Charlie Wegman) said
OK, picked up the kit today. Got such a ridiculously great deal I couldn't pass it up. In fact, I bought 2. It's the Trumpeter M1078 Light Medium Tactical Vehicle. A 2.5 ton 4 wheeled COE with what looks to be some beautiful detail amidst the 430 pieces. The truck is just plain BOOOORING though. I think I'll warm up the styling with a ring-mounted Flamethrower in the cab, some armor plate, and the "always-a-necessity when dealing with Zombies" stand off spikes. I'll still have cargo space too! Put me down for support & logistics.
Charlie
Vice Commander - AmVets Post 182

WWW
VonCuda (Hermon) said
Nice choices all around guys. I wish I'd stuck with 1/35 scale. I'm having a little trouble sourcing a few materials for my build but I hope to post some pic's soon of my starting point. My platform will be a 1/24 Pete with a 3 rear axle set up sporting single fat swamp tires instead of the usual dual wheels. She'll be an armored flatbed with gun positions and hauling an up-armored Cuda' for the fast scouting work.

PROFILE
old-dragon (Bob Chawgo) said
Alright...I have the boat started and am in the process of building the lifting rotors and..........oh-oh...wrong thread!
For "this campaign" I'm sticking with 1/25 scale even though it be alot easier in 1/35...need another set of E-100 tracks and bogies...you'll see the rest as it unfurls....

-I say I have two kids- one son & one daughter...my wife says she has three- one son ,one daughter and one husband.

PROFILE
Keeperofsouls2099 (Justin McCracken) said
I started cut wheels from styrene and had some left over tread from an M1a1 I built awhile ago so im trying to see how that works post pic's soon justin. 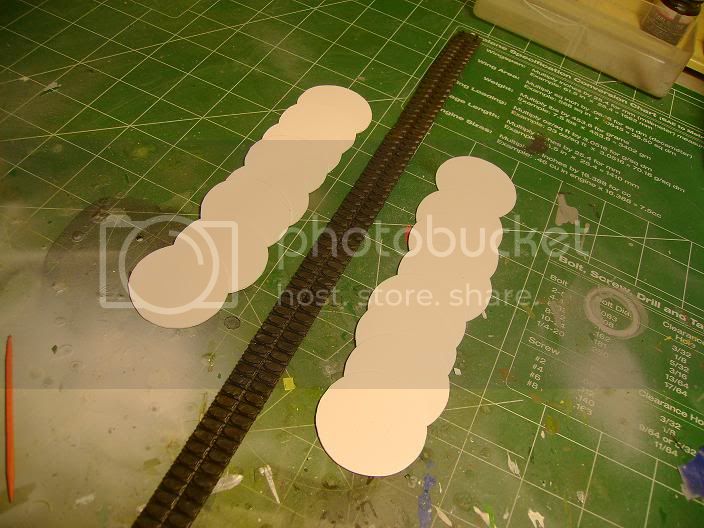 i see myself putting another order in soon
"From time to time, the tree of liberty must be watered with the blood of
tyrants and patriots."
- Thomas Jefferson

WWW
VonCuda (Hermon) said
Dude, stop buying it. There are millions of things you can use. For Sale signs, old credit card/gift cards, pill bottles, CD cases.....it's everywhere. Wait till the next local election and grab every plastic campaign sign you can get your hands on.

WWW
KoSprueOne said
"... Wait till the next local election and grab every plastic campaign sign you can get your hands on. "

I do this too

PROFILE
pastafarian (john gaines) said
I've decided to abandon my armored vehicle idea. That joker would get terrible gas mileage, we'd run out of gas, and the zombies would eat us.

So I'm prowling around for a large pickup or SUV. Not great mileage, but wayyyy better than the 3 or 4 mpg that the armor would get!

WWW
Loobes (Lewis) said
Started, dirve sprockets removed of m113 and turret being built, te interior will bring the most change and I am goin to make big lights.. you know the type

It's weird that photographers spend years or even a whole lifetime, trying to capture moments that added together, don't even amount to a couple of hours.
~James Lalropui Keivom

PROFILE
Bluestab (Alex) said
Just an update before I prime the chassis.

Chassis was stretched and added the second set of running gear. Kit bed was gutted. I'll use this for cargo. Kit bed and cab were placed on the chassis for mockup purposes. I'll probably add storage racks to the bed's exterior for added loot. The bed will probably be covered...don't want those scavenged Twinkies to get rained on.

The empty area is slated to be the fighting compartment for the crew with a pair of miniguns. This will probably be wider that the bed to allow a wider field of fire, including front and rear.

I'll probably use the cab basin as a base for a cab redesign, I'm looking for something wider and more roadwarrior-ish. It'll have a commander's gun too and maybe a recoilless rifle.

I'll toss the kit tracks in favor of an individual set of M113 tracks from an Academy kit. I have two options for drive sprockets, one from a Gavin and the other from the spares. I have no idea what they came from. I'm still debating on tires for the front. I'll wait until the vehicle takes shape to check for overall look.

To all who have shared their ideas on their builds 'WOW' I cannot wait to see the results. After seeing Hermons PVC Monster wheels, Justins home made tracks and wheels, and Bluestabs halftrack. I looked at all of those unfinished campaign projects and I now have a junk yard of parts to play with. 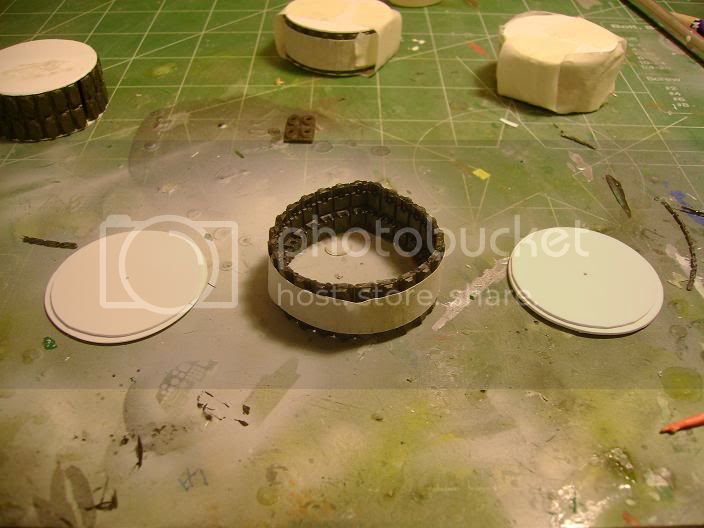 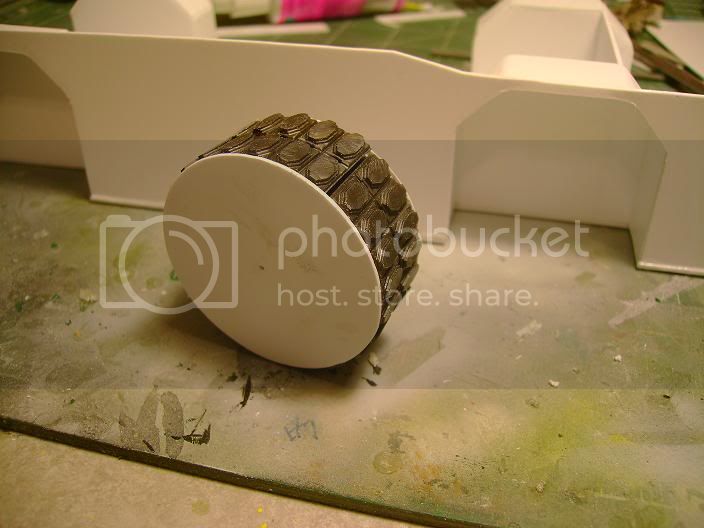 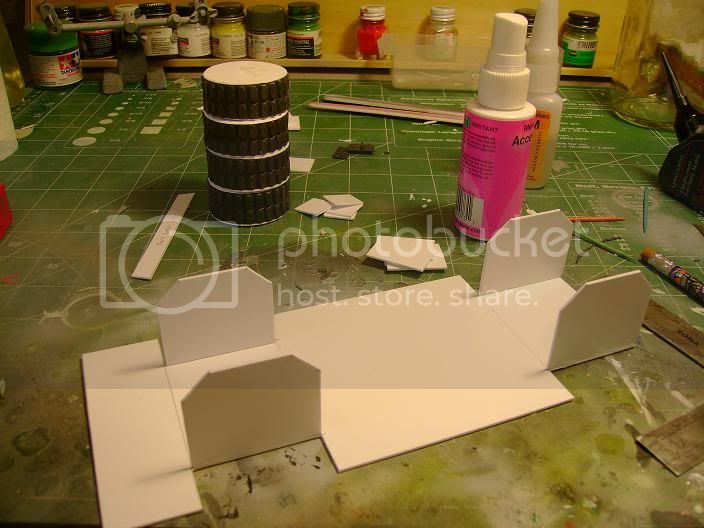 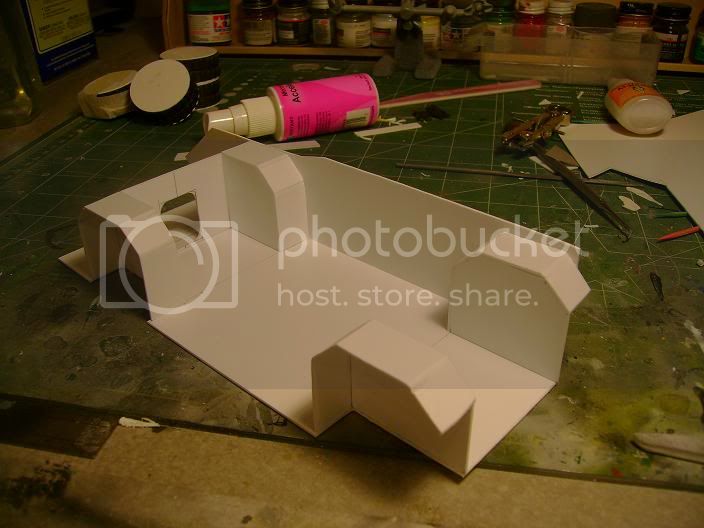 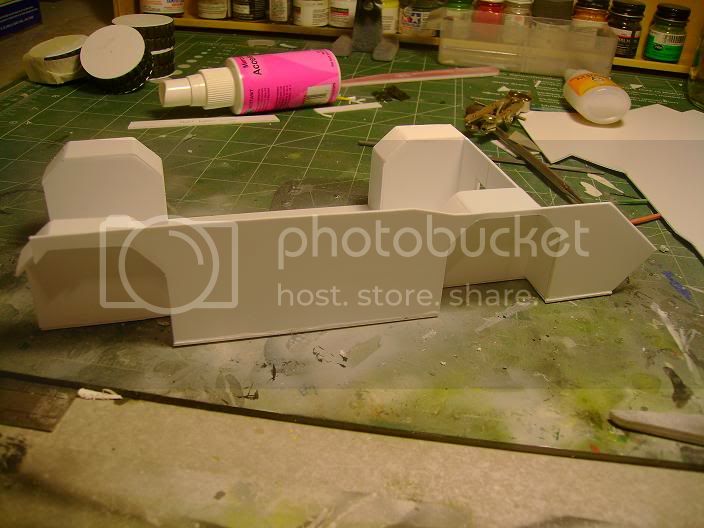 PROFILE
Wolfsangel (Charlie Wegman) said
Hey Justin, Alex, Hats off to ya! A Zombieraumpanzer and a stretch halftrack. The creative juice is flowin! or it could be liquor...
Here's da box of da truck I'm doin', yo!

Like I said, BOOOORING. They build these down the road from here. For the past 8 or 9 years they've had one on a rack in front of the plant on Interstate 10. Until I saw the kit, I thought they were doing sub-contract stuff for Mercedes. It's just Un-American looking... I actually had no desire to build one until:
A.) I realized the PITA it would be to arm a 1/25th vehicle and
B.) I found these on clearance at the local craft store
Done and Done!
Charlie

WWW
VonCuda (Hermon) said
Good God! I have to finish up some other campaigns really fast. I feel like I'm being left out of all the fun on my own campaign. Awsome stuff guys! Alex, the dual mini's sticking out the sides of the half track is a killer (pun intended) idea. Justin, that big armored thing and the wheel/tracks you're making are just bad ass to the max. Charlie, un-American maybe, but look at the ground clearence. Hell, you could roll over zombies all friggin' day and not even need guns.