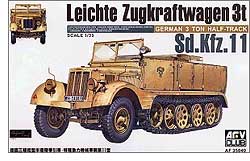 In 1932, Section 6, German Army Weapons Bureau was assigned the responsibility to supervise development for a series of half-track towing vehicles. Based on the towing capacity ranging from 1 to 18 tons, this series was divided into 3 levels: light, medium and heavy; to be developed and produced by various automotive factories, all vehicles in this series were given the type classification of sd.kfz.
The new SdKfz 11 3-Ton Halftrack Prime Mover fills a void in the collections of many WWII armor modelers. This workhorse was utilized on all fronts during WWII and was used to tow and carry a wide variety of military ordinance and personnel. This kit represents AFV Club's first kit of an Axis subject and it looks like they've produced a "show stopper"!
Click Star to Rate
No one has rated this yet.
THIS STORY HAS BEEN READ 7,257 TIMES.
ADVERTISEMENT