The Winds of Change are Blowing...
Wednesday, November 30, 2005 - 06:29 PM UTC
By JIM STARKWEATHER
It has been quite a while since I published a news article about the site. For those who have been around most of our (almost) 4 years you probably remember me posting quite a few site "news" stories. We have a few things to announce prior to the sites birthday on December 16th.
Silver Star Enterprises
Armorama is now a company! Officially it is a subsidiary of Silver Star Enterprises which is a company I just founded with my wife. Many of you know that the site has been doing better and better in terms of revenue and we are no longer in the days of going month to month paying our server bill. Making the site a full-fledged business enterprise puts me one step closer to making it one of my full-time pursuits. Of course that may still be years off.

I just picked up our bank cards from the mail today. Needless to say I did a bit of a double-take when I saw the words "ARMORAMA" on the bottom of the card. It was a moment. :)

The Road Ahead
My plans are too keep working on the core things that make this community work. Those being.

1. The sites dynamic content management system which allows anyone to become involved in both contributing and publishing content.

2. The strong sense of community we share as members of Armorama. Armorama is known as a friendly, encouraging, and rewarding place to be with other scale modeling enthusiasts. We have a wide range of users from beginner to expert, from OOB builder to rivet-counter. All are welcome (unless you are a troll or a hacker! hehe).

3. Volunteer staff members work as a team and as individuals to broaden and enhance the site, it's member-base, and our connection to manufacturers and vendors. Without their tireless energy and dedication this site would not be what it is today (and Jim would have long gone crazy).

Our New Home
We will have a new home soon. I am speaking of the computers that power the site. Currently we are running on a Dual-Xeon 2.4GHz Pentium 4 PC with 1.5GB of RAM. In a short while we will be running off of two separate servers (3GHz P4's with 2GB of RAM each). This move is to a "clustered" server environment that should allow us to grow at any pace needed. If we need a separate server for mail... presto... we can add one in a day. This kind of scaleable system is the wave of the future and should serve us well. 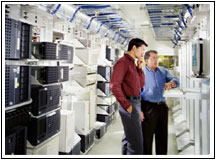 If you'd like to see the future just click on over to www.armorama.net and you will actually go back in time a few weeks to a database capture I did then. This site IS the new site on the new server. However not every link goes where it should and our PhotoPost gallery with over 70,000 photos is not yet migrated as well. Later this week I will be asking people to test out this new server so I can fix any last minute bugs. Then I will do a final data and database update and then update all the domain info to point our domains to this new server.

A Site Divided?
I am seriously considering how best to deal with growth in our non-Armor sections. While I always intended Armorama to be about ALL forms of military modeling, sadly I did not figure on how the name would keep the site from becoming all I originally was working for. Also as the site gets larger we are seeing why big companies tend to divide into smaller divisions. Management require leadership and leaders need boundaries. One possibility I am considering is creating affiliated sites for warships, figures, and aircraft. These sites would work and function just like Armorama, they may even look similar except for the name, but they would be individually dedicated to their primary focus. Your user account will work across all sites and some of the data in our database will be shared between all sites. For example your user profile will be the same whether you are on Armorama, the aircraft site, or the parent site they will all be linked to. This "parent site" will be where we can cover general modeling subjects as well. Also if an article about an LST is of interest to both armor and ship modelers, it can appear on both sites.

Some of you are probably thinking "Is this happening tomorrow??". No. It will likely happen over a long time (perhaps all of 2006). Armorama is not going anywhere (except to the new servers). The community is made up of people no matter which site or what URL they are on. And while Armorama will likely be my favorite of the sites, it will always be the place this "little project" started from, and thus will always be favored by many of us.

Others are probably thinking that at the rate Jim is going lately it will take a REALLY long time to do all he is describing. Actually... it's already done for the most part. For example www.tfactory.org is an example of the Armorama engine being used for a mostly separate site. The new sites will likely look much more like Armorama does now though.

Of course I have a few "improvements" I want to launch as well. More on those later. Also I will have a few Holiday Treats for staff and users alike in the form of little fixes and enhancements here and there.

In Closing
Lastly I would like to say that I have not been in the best of health since about April of this year. I am finally starting to feel like my old self however and I am sure that, yes, the winds of change are blowing.

Jim Starkweather
Editor-in-Chief
Click Star to Rate
No one has rated this yet.
THIS STORY HAS BEEN READ 12,134 TIMES.
ADVERTISEMENT