TV, Movies, and Games
Talk about TV, Movies, Gaming or anything entertainment related.
Hosted by Jim Starkweather
There is only one Catwoman

PROFILE
blaster76 (Steve Joyce) said
Sorry Halle, you may be an academy award wining actress and one hell of a sexy woman, but when it comes to being Catwoman, well the one, the only JULIE NEWMAR !!!!!!!!!! She was the first and without a doubt the sexiest, and that was in 66, imagine if she had done it in a flic and tried to be sexy rather than campy. Gives ya chills don't it ?!!!!!!!!!
Those who don't learn from history are doomed to repeat it
VMI "76
Order of the Red Nose Plug
Blue Volute Bumper Spring Award

PROFILE
Halfyank (Rodger Cole) said
Here here Steve. Yes, Halle is not hard on the eyes but just doesn't match Julie. She nearly single handily helped convince many of my 10 year old friends and me that we liked girls after all.

PROFILE
Moezilla (Maurice Fitzgerald) said
I'll 3rd that, I think Julie Newmar was one of my earliest crushes (along with Barbara Eden in I Dream of Jeanie) along with every other red blooded American boy. lol

Kinda like Uma Thurman cannot replace Dame Diana Rigg as Emma Peel, as much as I like Uma.

The origin of Murphy's Law : "In the beginning there was nothing- which exploded"

"No sense being pessimistic. It wouldn't work anyway."

PROFILE
blaster76 (Steve Joyce) said
As much as I loved Dianna Rigg as Emma Peel, I feel her greatest role was as Tracy the woman James Bond married in the (unfortunatly) castigated "On Her Majesties Secret Service". Every time I watch the movie, I turn it off shortly after they get married, I cannot stand to see her die.

PROFILE
AJLaFleche (Al LaFleche) said
I prefered Eartha Kitt's deep, growly puRR-RR-RR-RR.
Wings & Wheels Modelers-IPMS
"Whatever your hands find to do
You must do with all your heart."
From "Through Your Hands" by John Hiatt

PROFILE
chip250 (Chip Bullitt) said
How could you not love her? I find myself watching Twilight Zone marathons, and then she is on one and its like my first kiss! 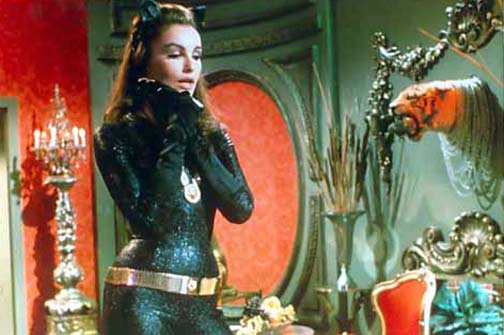 On the bench:
1/35 Scratchbuilt Rail Tank

PROFILE
kglack43 (Kevin Glackmeyer) said
This is a kinda goofy thread....but....i'll have to agree with Cuhail on the Catwoman thing....Michelle is hot. As for the "early crush"...i'm sure i'll be dating myself here....Loretta Young.