I think most of these stories tell the same lesson for us, the biggest dangers come from the tools and materials that we use everyday. We just get used to them and totally forget how dangerous they can be.

I regularly water my models with blood and shower them in curses.
Ideals are peaceful. History is violent.

Not too long ago, I was slicing through some sprue with a #1 wood carving blade. Guess where this is going....

And one fateful swipe stuck the blade through my finger and into the bone. I no long use that blade for sprue work and, after a few colorful adjetives, actually tossed the blood sacrifice in the garbage imediately. The kit turned out great, by the way.

Yes, I did this back in `05, five days later the hand turned purple, infected under the skin. Redeemed by antibiotics, the hand survived. The model turned out well.

As for good stories, I was pleasantly surprised in 1995 when I sold four of my displayed models out of a hobby shop. It was enough to go on a small vacation.

Otherwise, the usual- getting kits I`d lusted after for years for a song, inheriting back thousands of dollars of work I`d sold to a collector after he died, etc.

This hobby has been interesting. I haven`t gotten laid out of it yet, but there`s still time.

WWW
exer (Pat McGrath) said
Was watching TV one night and using a Number 11 blade to trim a resin figure- ended up slicing through my left index finger and nail, couple of hours in A& E- 11 stitches plus the nice New Zealander who stitched my finger gave me the forceps and the tweezers she used to work on me

Pat
work to become not to acquire

PROFILE
Middle_Franconian (Sebastian) said
I think everybody of us can tell at least one story of broken pitot tubes (happened to me several times when building a F-104). Or a broken seam in a late state of modelling when everything is already sanded, rescribed and painted (that was when building a 1-72 F-4F).

But most memorable happened one year ago: I wanted to rush paint drying on a 1-72 Revell Panther D with the help of a hair dryer... guess what happened: I forgot to press the "cold air" button. I noticed it too late. The track fenders and wheels were funny warped. And the main gun lost its potency... I did not made a photo because the sight was heartbreaking


LtCol Henry Blake: "Radar, whatever it is: sign it, cancel it or order five more!" 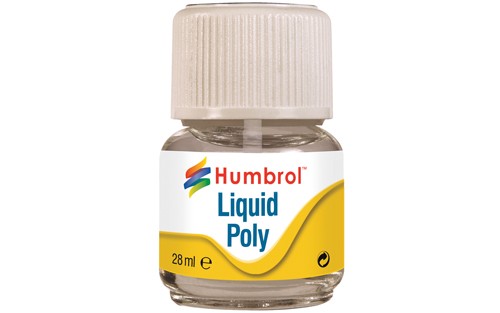 Humbrol liquid glue with brush applicator. The brush is a separate part but sometimes it happens that it sticks to the bottle cap.

Oh, that hapless bottle design! I got a story about that.
I had this older style cubish bottle Humbrol liquid cement and it was running out so I bought another one so I wouldn't be without when the first one ran out. I was a bit surprised that they had changed the bottle, but bought it anyway. I've never liked those so called child-proof bottle caps, as they always seem to be a royal pain in the rear to open. I had the intention of pouring the contents into the good old bottle when that ran out. I tried out the new cap for a couple of times, found out it was just as much a PITA as I thought, and put aside to wait for that older bottle to run out.
I wasn't even through with the old bottle when I for some reason decided to check how the new bottle was doing. To my surprise, the bottle was empty! The cement had evaporated. That was it, no more child-proof but less-than-100% tight caps for me.

PROFILE
ftauss (Frank Tauss) said
Lesse, back in the late 60s! I had a Revell Yorktown. I had spray painted the deck and put in on the picnic table to dry. In the sun. In the summer.

I do have 2 more in the stash for some day.

Speaking of Dremels, I came up with the really cleaver idea of chucking the wheels of my 1/25 Tamiya Centurion in the Dremel and and sanding off the seams. Yep, had to buy another set of wheels from Tamiya.

I also, while rushing sanded off the tabs on the glacis plate that holds it in place unglued.

I figured out how to fix it eventually, but I put it back on the shelf until I got a bit better. I did manage to assemble the tracks without breaking them.

PROFILE
ftauss (Frank Tauss) said
The worst thing I ever saw was a fella had finished a Tamiya Swordfish. I'm a sucker for them and I was just loving it. We were in hobby shop. He went to put in in a display case. And dropped it. It was bad enough but he flipped out and stomped and then kicked. Talk about awkward moments.

PROFILE
bmikk1 (Brandon) said
I will go with my worst and best.

My first draw into this hobby was around 11 or 12 years old. I had a passion for monster trucks and discovered there were several model kits available. I would save all my lawn mowing money and rush out and buy a new one and then lock myself away for hours building it. After filling my shelf with about 4 or 5 of these beauties I was feeling pretty proud of my collection. One day, returning from school I was told by my mother that she let my very young cousin play with my "toy trucks." I rushed to my room to find a pile of broken and mangled plastic thrown all about the floor.

Recently I found a re-pop of Monograms 1/25 "quadzilla" which was one that was destroyed (and the first model kit I ever built.)

Best? last year we had our basement finished and my dear wife allowed me one of the bedrooms to turn into a "man cave." It is great to have a dedicated place (with a locking door) to hang out and relax putting glue to plastic!!

PROFILE
richardw (Richard) said
I'll start with my "best"...Although that would be to do with my other hobby, flying model aircraft. I was killing time in a small town during a holiday break and as usual in the UK, it started raining, so I nipped into the nearby church which was holding a jumble sale. On one of the tables, burried under a pile of the usual junk some elderly ladies were looking through, was a small box i recognised at once. To my good fortune, it still held its original contents, a vintage model airplane engine, worth about £150. When I asked how much they wanted, I was told they didn't know what it was and I could have it for 50p if it was any good to me....RESULT!

My "worst" would have to be building a model for someone as a commission, which I hated doing because the subject matter held no interest for me, only to find out later that he'd entered a couple of local shows with it as his own work! Ok, I got paid for it, but he was getting the credit. That was way back in 1977 / 78, I was only 17 and just let it go. I still sold stuff through my local hobby store after that, but it took the gloss off the hobby for a while