The Weak Shall Perish

Everyone forgot Enemy at the Gates,

nope it started off well and deteriorated fast ... a major disappointment

The Weak Shall Perish

PROFILE
redshirt said
The top 20 in my collection:

Horable Mention:
Casablanca
To Have and Have Not
Gone With the Wind
Lawrence of Arabia
Legends of the Fall
The Hunt for Red October
The Train
Dr Strangelove
Catch 22
The Guns of Navarone
12 o'clock High
From Here to Eternity
The Enemy Below
The Deer Hunter
The Red Badge of Courage
BAT 21
The Beast
Gods and Generals
Saving Private Ryan
When Trumpets Fade
The Eagle has Landed
The Blue Max
Enemy at the Gates

PROFILE
afv_rob (Rob Harvey) said
Another one to add to the list of Fantastic foreign war films, 9th Compnay.

This is a Russian film made a couple of years ago, a true story about the 9th Company, a group of Russian soldiers defending Hill 3234 in 1988 during the war in Afghanistan. The 39 men were heavily outnumbered but managed to hold the high ground and were made heroes in Russia. The film is a out and out war film and is simply stunning, a must see! It features loads of authentic military hardware such a Mi-24 Hinds, BMP 2's and T-64b's, and has some amazing battles scenes. Kind of reminded me of Platoon and many of the other Nam films, similar in style.

'As all else failed we raised our fists and weapons,
Not born as soldiers, but driven to the end'

WWW
1969 (Steve Readdie) said
My favourite film has to be Cross of Iron,liked it so much i sculpted this 1/9 scale bust of Sgt Steiner,also sculpted Kruger to go with him,not painted him yet. 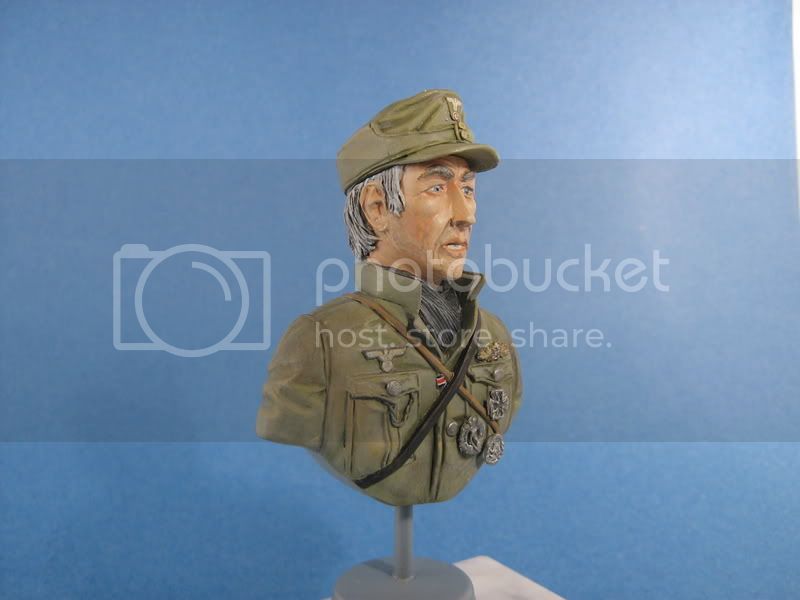 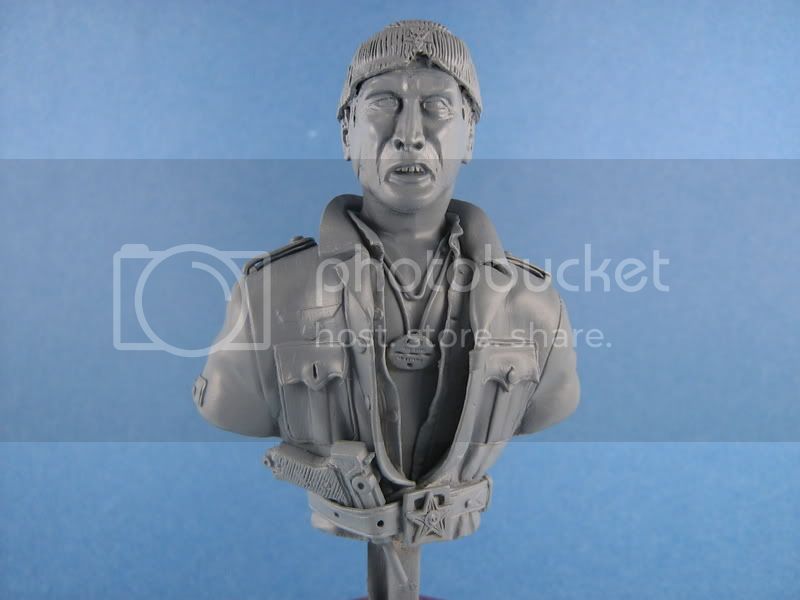 here are a few that I like to watch every now and then..

Das Boot (I watch it in German with the English Subtitles)
The Longest Day
The Flying Tigers
The Fighting Seabees
Zulu
ANZACS (I wish it would come out for N.A. Release on DVD! )
The Immortal Battalion (with David Niven)
Go for Broke!
Gung Ho!
Patton
We Were Soldiers
DANGER UXB!
Battle of Britain
The Lost Battalion
Sgt. York
The Green Berets
(Other John Wayne War movies!)
Gettysburg
Gods And Generals
I have it on VHS, probably wont find it on DVD, it was released in the US called IRONCLADS.
Technically not a War movie, but set in England during WWII, "Foyle's War"
Full Metal jacket
Platoon Leader (with Michael Dudikoff)
Platoon
Boys From Company C
The Siege of Firebase Gloria
The Sand Pebbles
55 Days at Peking
The Lighthorseman
The Wind and the Lion (LOVE the scene with the Marines Double timing through the streets!)
Sink the Bismarck!
Corvette K225 (Anyone know if its on dvd?)
Band of Brothers
Pork Chop Hill
Sharpes Rifles series
The Sea Wolves

PROFILE
Irochu said
I would say my favourite is probably Saving Private Ryan. And the Band of Brothers series is very similar to this, and I feel that it is better too, though not quite a film is it...

PROFILE
Fallschirmjager (Joe) said
Ice Cold in Alex
Das Boot
The Longest Day
The Great Escape
The Pianist
Band of Brothers (Yeah its a TV Series but it has an even larger scope than a movie, its basically a 10 hour movie)
Zulu

PROFILE
Bigrip74 (Bob R.) said
All of the above plus the movie that I can not remember the name where soldiers from French North African colonys fought for France in Europe.

PROFILE
GVoakes (Grant Voakes) said
Not mentioned (and technically not a war movie, although it takes place during the war) is "Conspiracy" with Kenneth Branagh. The film centers on the Wannasee Conference with Branagh as Heydrich and Stanley Tucci as Eichman. Really quite well done!

Glad to see Cross of Iron on the list. Always been a favourite of mine.

Also - if you're into Russian propaganda - catch "the Battle for Berlin" The actual battle is only a small part of the film, which follows two Stalinist era characters (he - the heroic steel worker, she - the village school teacher) through the war. The best part - all the captured German equipment (and Soviet equipment, some of it masquerading as German) in the battle scenes. And the guy who plays Stalin - looks like Stalin!

I also agree about Kelly's Heroes. A comedy really, but a great war film too.

- Paths of Glory (Kirk Douglas jut-jawed in WWI)
- Sink the Bismarck (brilliant battle sequences with model ships and high tension back at home. Dana Wynter is still the best looking Wren ever....)
- Battle of the River Plate (great battle sequences with Anthony Quale and Peter Finch to boot)
- The Cruel Sea (Battle of Atlantic in corvettes, Jack Hawkins at his best - rivetting stuff!!)
- Pork Chop Hill (Gregory Peck in peak form - Korean war futility and heroism)
- The Young Lions (Montgomery Clift, Marlon Brando and Dean Martin - war from both sides point of view)
- Pearl Harbor (yeah I know, much maligned Hollywood doo-doo, but the CGI was brilliant and very exciting and Alec Baldwin's acting and dialogue as Jimmy Doolittle is among the best there is on film anywhere).

I am husband to Rosemary, the Barbarian Queen Of The North!


"too much colour distracts the viewer"
Jacques Tati

I also agree about Kelly's Heroes. A comedy really, but a great war film too.

- Paths of Glory (Kirk Douglas jut-jawed in WWI)
- Sink the Bismarck (brilliant battle sequences with model ships and high tension back at home. Dana Wynter is still the best looking Wren ever....)
- Battle of the River Plate (great battle sequences with Anthony Quale and Peter Finch to boot)
- The Cruel Sea (Battle of Atlantic in corvettes, Jack Hawkins at his best - rivetting stuff!!)
- Pork Chop Hill (Gregory Peck in peak form - Korean war futility and heroism)
- The Young Lions (Montgomery Clift, Marlon Brando and Dean Martin - war from both sides point of view)
- Pearl Harbor (yeah I know, much maligned Hollywood doo-doo, but the CGI was brilliant and very exciting and Alec Baldwin's acting and dialogue as Jimmy Doolittle is among the best there is on film anywhere).

Thanks for the information Bob.

PROFILE
PantherF (Jeff T. Stringer) said
One of my favorites always catches heat for it's inaccuracies but:

Battle Of The Bulge
Patton
Saints and Soldiers
The Longest Day
Hell Is For Heroes
Kellys Heroes
Tora! Tora! Tora!

WWW
JPTRR (Frederick Boucher) said
Someone probably posted this above, but AMC has an elimination poll for the The Greatest War Movie?. Takes about 20 minutes, but very interesting.
If they demand your loyalty, give them integrity; if they demand integrity, give them your loyalty.--Col John Boyd, USAF
Any plan where you lose your hat is a bad plan.

PROFILE
TAFFY3 (Al Bubnis) said
Hi All, how about Breaker Morant, She Wore a Yellow Ribbon, The Horse Soldiers, Zulu, and Glory?

PROFILE
DogEgg (Richard Gough) said
Definitely "The Cruel Sea"
Can I include "Tigerland"?
The first half of "Full Metal Jacket"
and "Empire of the Sun".
I think "Saving Private Ryan" was great - a bit sentimental, but very realistic, very believable.
"We Were Soldiers", a bombastic vignette of a monumental historic battle...

Think of more later I'm sure...

I see a red door and I want it painted dark olive, dry brushed in sand and add some etched brass while you're at it, please. Failing that, paint it black...

PROFILE
Henk (Henk Meerdink) said
Nobody mentions 'A Bridge too Far'.....
Watched some of 'Theirs is the Glory' yesterday, sobering stuff if you realise that ALL the participants are veterans who were actually at Arnhem and Oosterbeek.... and it was filmed entirely on location, in the ruins of Arnhem. Good to see real Panthers, rather than the Leopards in disguise of ABtF


The early bird may catch the worm, but the second mouse gets the cheese...

PROFILE
Aleksey_Gilevskiy (Aleksey) said
one of the best films is "Batallions are asking for fire support" the film is really fascinating!
4 episode. The film is dedicated to GPW, to be more precise to Ukraine`s liberation. 2 batallions had a task to capture a bridgehead on the opposite bank of the river Dnepr. When the task was nearly done, the order changed and attak`s direction was also changed. Those Batallions hope for artillery support, but all artillery divisions were moved to another direction. So batallions bleed hard. Nazis moved the main part of their units to obviate the break. There encirclement created. 2 batallions were destroyed except 1 officer and 4 soldiers. Meanwhile, Soviet infantry division strike a blow onto german`s defence on the nothern part....

This film is really worth looking!!!!! All other films mentioned here cannot be compared!!!!!

PROFILE
whoopsydoo (shane mills) said
One of my favs is a low key Aussie film "Kokoda" which shows how brutal the Kokoda Track Battle (sorry, with Aussies it's Track, not the US-inspired term 'Trail' )really was. The film treats the japanese interestingly, as until the last bit of the film, you never see their faces. They are always "larger than life" jungle bogeymen, covered in brush camouflage with a huge Arisaka rifle and long bayonet. They appear as evil spirits from the jungle - rather like "Predator". The bullets whizz, somone dies, and then you hear the rifle crack - as it would have in real life. Only at the end, where the Japanese charge the Aussie positions at Isorava and get mown down by the numbers, falling dead into the weapons pits, do they shrink to normal size and appear as human beings of flesh and blood. Kokoda showed the world that the Japaense were far from unbeatable, and the film reflects that quite well. It's also quite moving, showing that the 39th Batlalion that ground them down in a fighting retreat were the equivalent of US Guardsmen, without the training or weaponry, that regular troops had,

A frind of mine fought at Kokoda and I had to dissuade him from watching the DVD - at nearly 90, I think he doesn't need the nightmares the film would inspire.

PROFILE
treadhead1952 (Jay Massey) said
Gee, sounds like you all have been touring my DVD collection!

Operation Petticoat, has anyone actually considered painting one of their sub models Pink?

And while not exactly a war movie, Down Periscope with Kelsey Grammar and the cook's flatulence problems were classic, not to mention greasing the rungs of the ladder with PAM for the Execs' delight.

What about Red Dawn and On The Beach? Not any actual wars involved, but lots of military themes.

PROFILE
jphillips said
I saw "Letters From Iwo Jima", and I thought it was pretty good. Spike Lee, put that in your bong and smoke it!
I have yet to see Eastwood's other work, "Flags Of Our Fathers", which I hear is not too bad, although "Letters" is supposedly better.
Also, "All Quiet On The Western Front" was a great war movie, I thought (the original, black-and-white one, not the stupid remake).
Someone mentioned "Breaker Morant", that's another good one. But it really made my blood boil, at the injustice!