Scratchbuilders!
Built a model or part from your own materials lately?
Hosted by Mike Kirchoff
My First Scratch Build: A Stand

PROFILE
goldstandard (Michael Spitler) said
Hi there. I have been working on an F-14 and decided to build it wheels up. However, no stand was provided with the model, so I figured, why not build one from styrene sheet myself? It ended up being a far more involved thing than I expected, but hopefully the results will acceptable.

The main thing was getting the layout for all the pieces right. As you can see, I first made templates from paper, and all that scrawling on the left shows how much work it took to remember all that stuff I had learned and then forgotten in Trigonometry class... 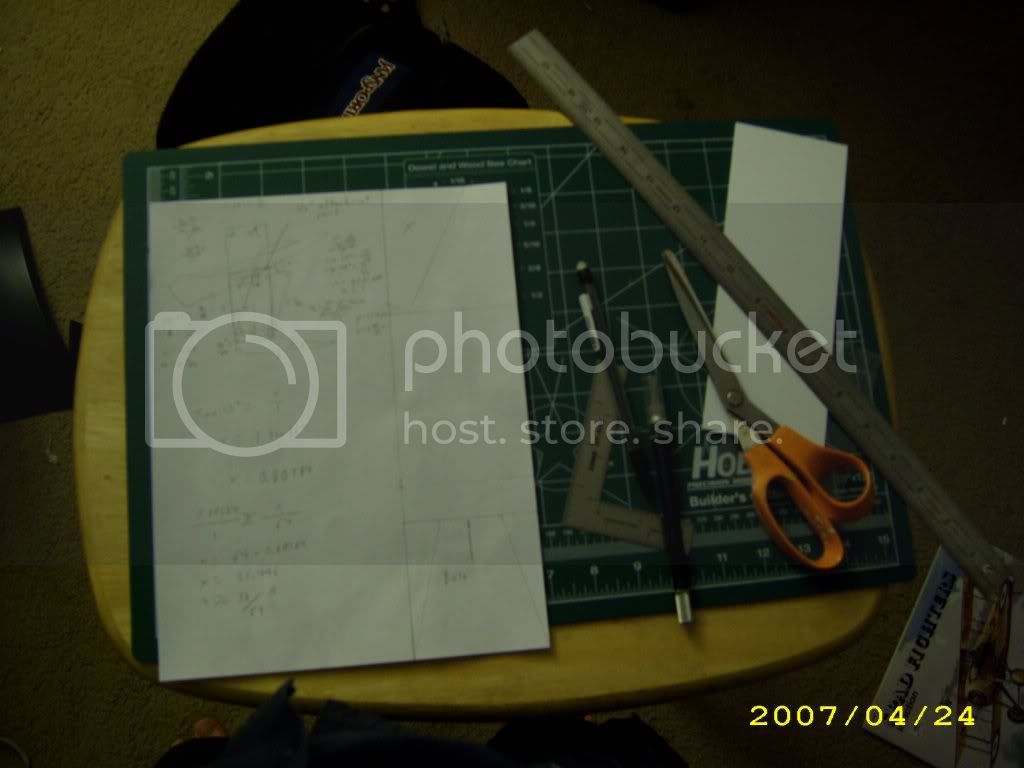 I wanted to have the F-14 in a 15 degree climb, and wanted the base to be a little more dynamic than just a flat sheet of styrene. I ended up being a little off in the cutting, but instead of starting over I just filed and sanded till it was mostly correct again. In the next two photos you can see my completed template. 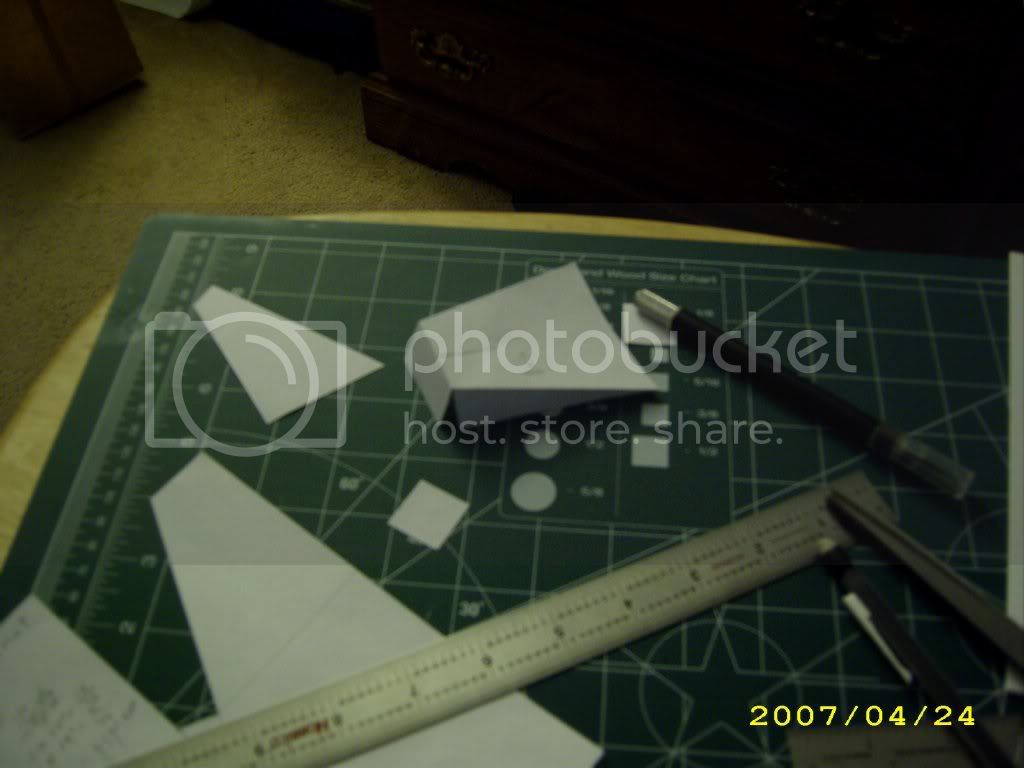 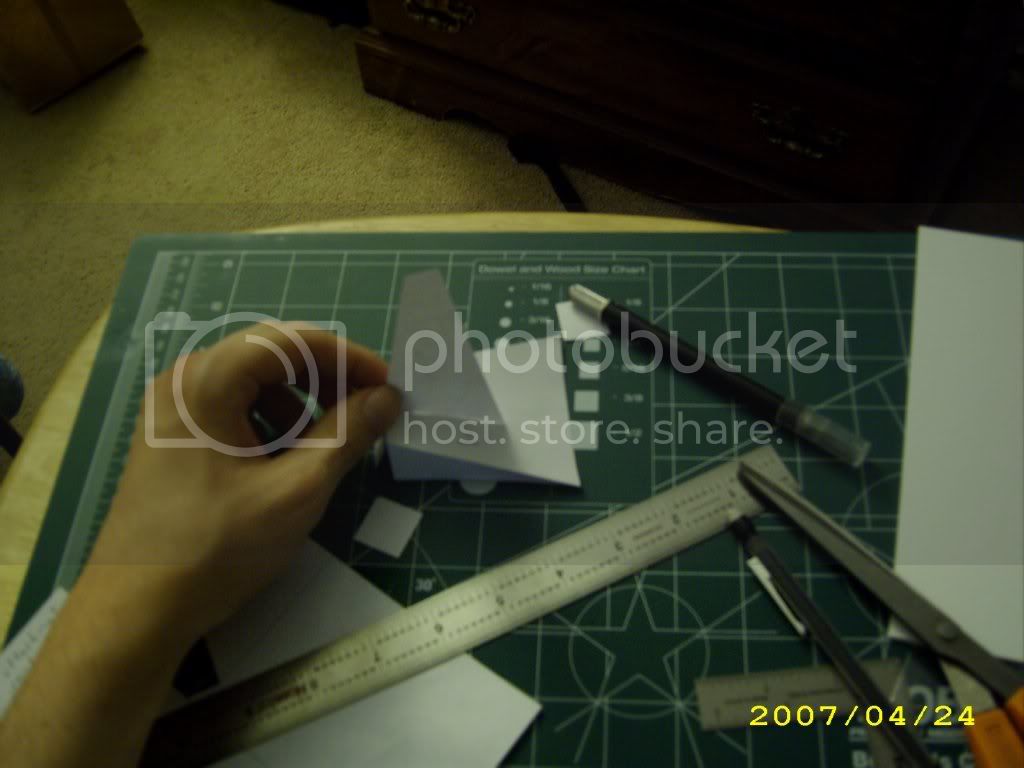 The camera I have available to me isn't that good, this was the only photo I had that was somewhat usable. I used a squaring ruler to ensure the two sides of the base were square after glueing. The tape was to help hold them in place. 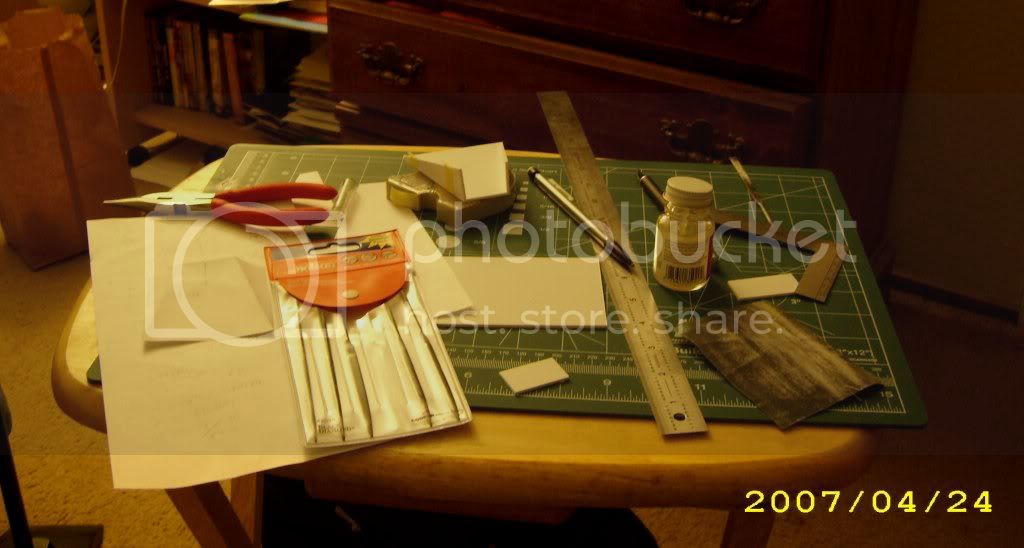 I mismeasured the back piece for the stand, as I had forgotten to take into account the thickness of the plastic compared with paper. It didn't matter though, because I was able to fix it with a piece of strip styrene. 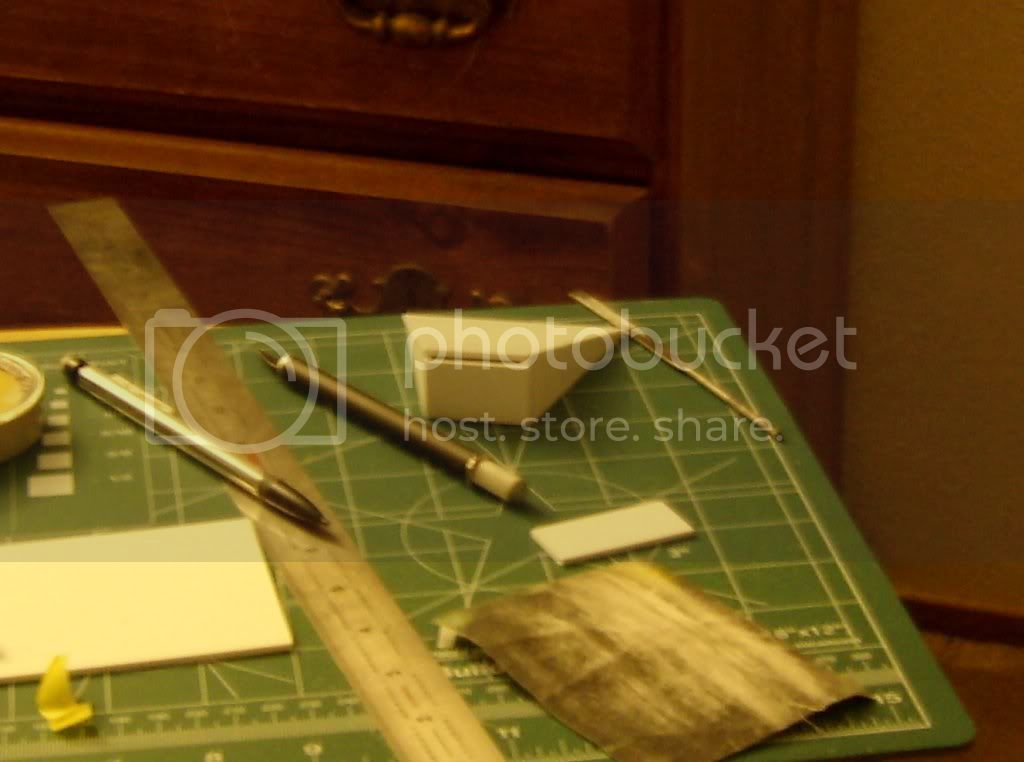 After marking the center of the base where the arm of the stand goes, I made the bottom of the arm true by holding it against a square while sanding it: 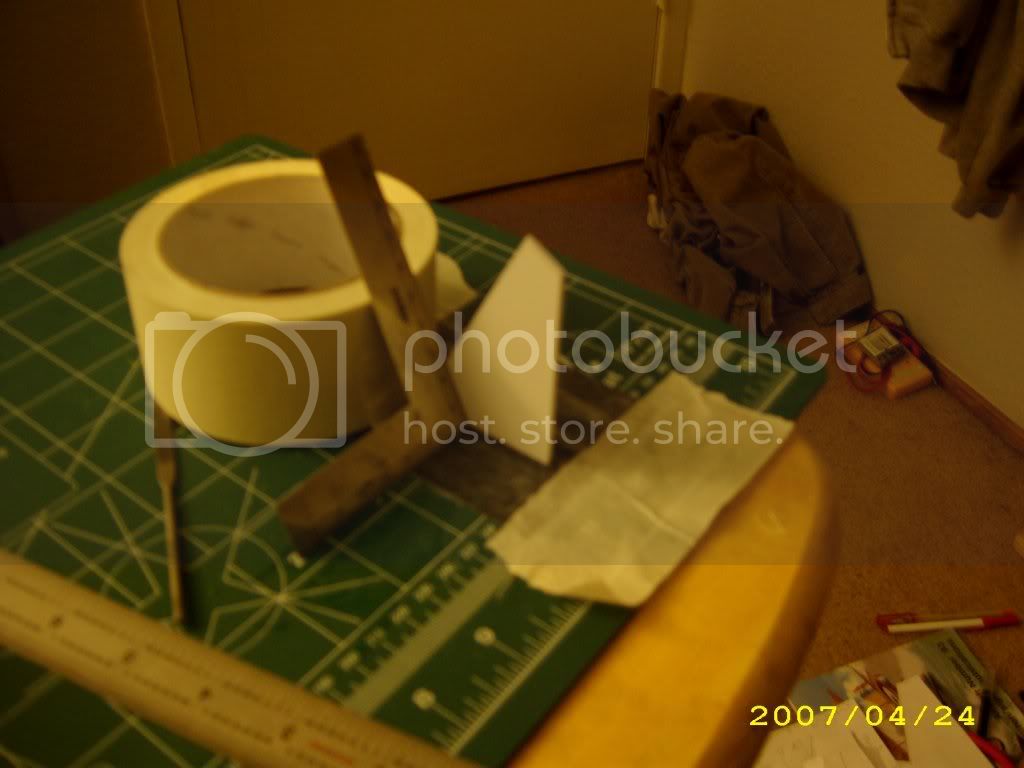 I had bought the assorted pack from Evergreen but it lacked round styrene rods, it only had square rods, and the largest bit on my pin vise wasn't big enough, so I carefully scraped the rod down to size before placing them in the holes I drilled into the arm and base. 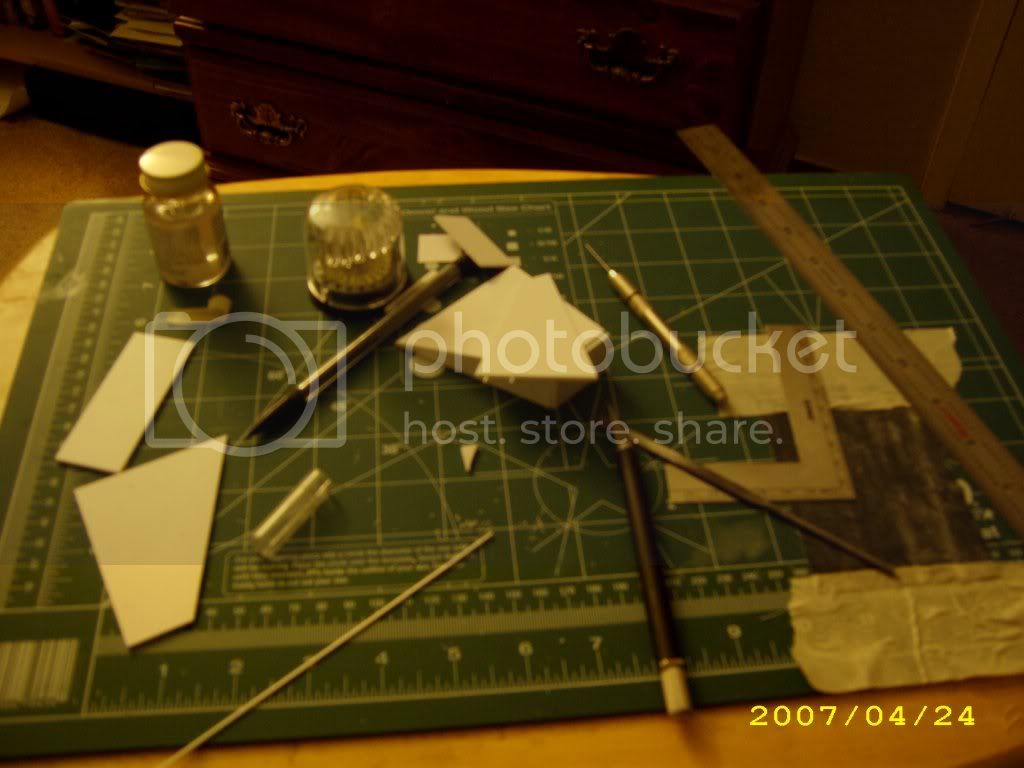 Finally, I tested the fit, and it fits very well! I also used a file to bevel the edges of the base, to reduce the boxiness a bit. All that is left is to clean it up, primer it and paint it, though I am not sure what color I want to paint it yet. I want to have a white bar on the front of the base because I saved the name decal from my F-14 kit to label the base, but for the rest of the base I am drawing a bit of a blank. I've been considering aluminum, but might just try a different scheme. I have a lot of sea blue that could be put to use too... 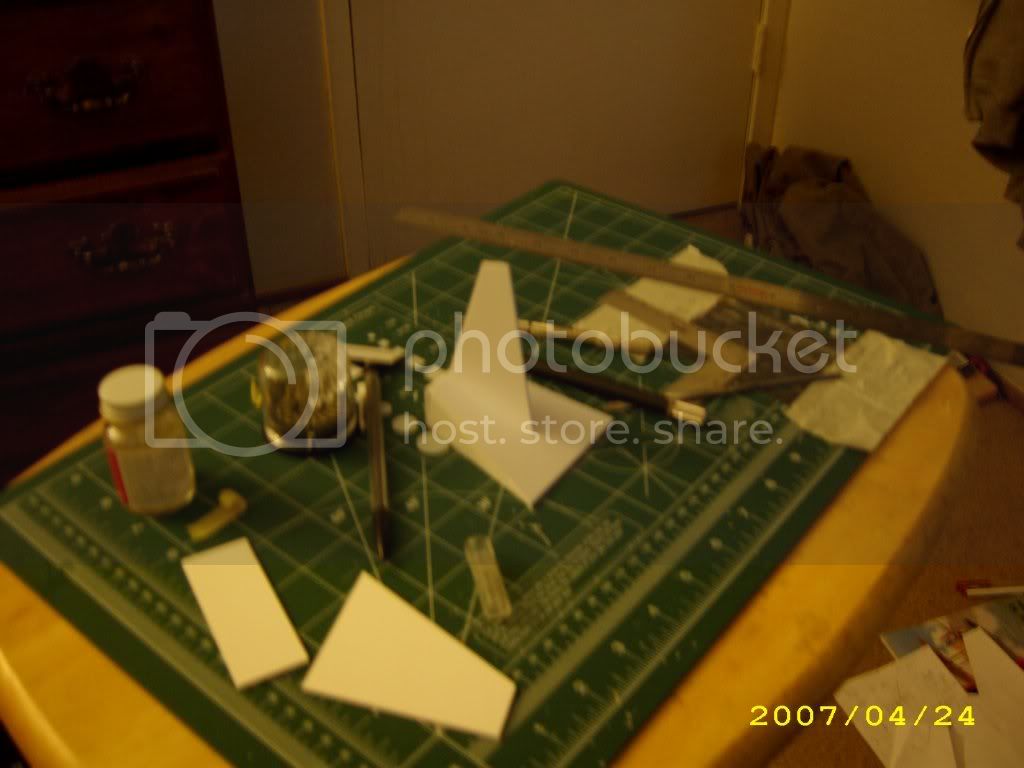 The thread with my F-14 WIP can be found here.

PROFILE
goldstandard (Michael Spitler) said
Well, after waking up this morning and taking care of some pressing non-model related business I went ahead and primered, painted and decaled the base. Pretty ho hum stuff, I used the testors Grey primer rattle can, painted the area where the white rectangle would be with white, then masked that off and painted the rest of the base semigloss black. I used liquid mask to cover the attachment point because I am lazy and don't like scraping paint off to get a good bond when the plane is attached. 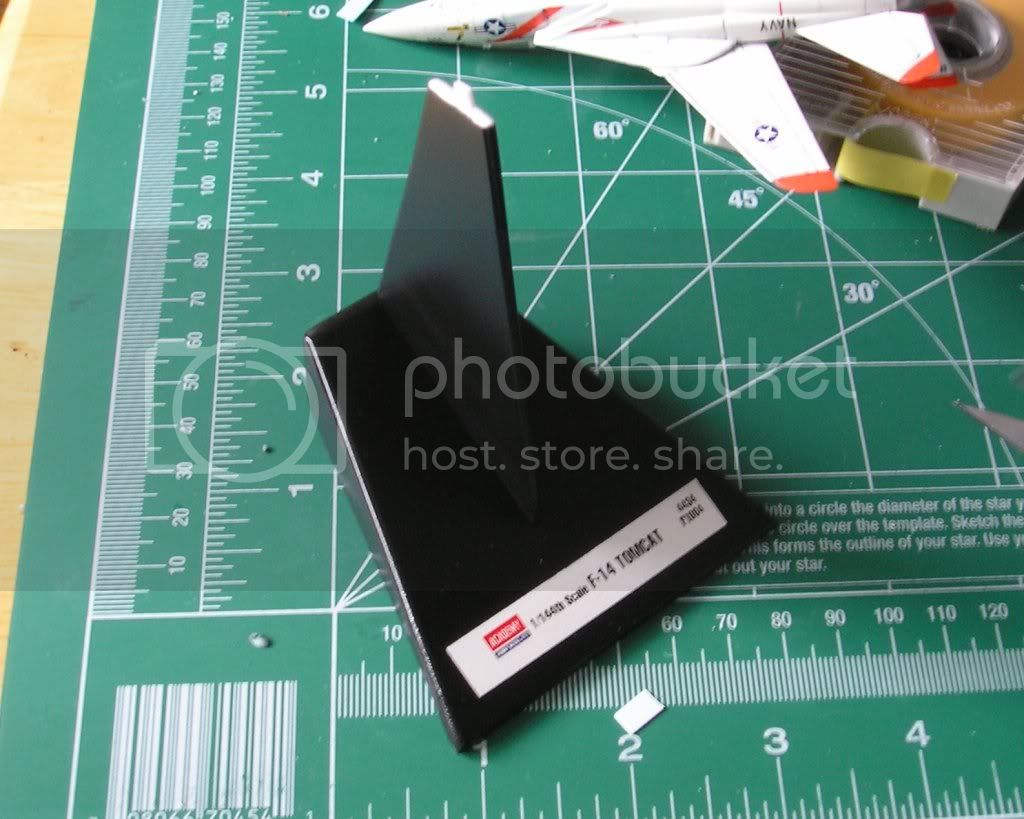 Here is a picture with the F-14 attached: 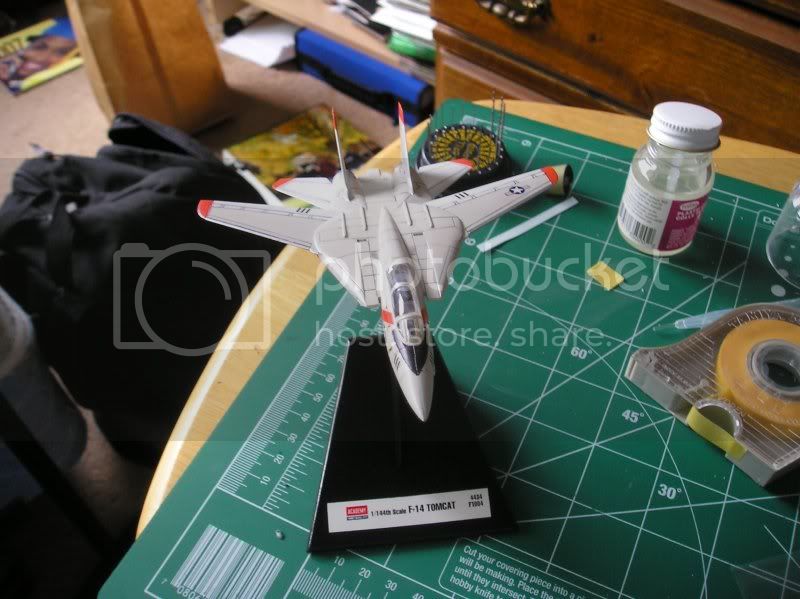 I am quite satisfied with how the base turned out. I do need to work on my accuracy with cutting the pieces and joining them because there were some inaccuracies that had to be taken care of. My next project will be to add some detail to my old Academy P-40B Tomahawk in the wheel bays and maybe elsewhere. It just doesn't compare at all to their more modern P40E and P40N.

PROFILE
18Bravo (Robert Skipper) said
Nicley done. I've seen professional ones that didn't look as good.
Sadly, I am old enough to remember when a lot of aircraft kits came with stands. I think the old Aurora WWI planes did.
A strong man stands up for himself; A stronger man stands up for others.
Admit nothing. Deny everything. Make counter-accusations.
He is not Khan who calls himself Khan. Afghan proverb