PROFILE
ivanhoe6 said
Hello all, Has anybody ever attended the "Show of Shows" in Louisville, Kentucky ? It bills itself as the "world's biggest military antiques show". It runs Feb.22 & 23. According to the article in today's paper's Travel Section there will be just shy of 2000 tables & 700 vendors. With items from ancient to the US Civil War, both World Wars and post WWII conflicts. Also, there will be a used Russian space suit used on the Space Station.
VIP Veterans have been also invited to talk with visitors.


Curious if it's really worth a 5/6 hour car trip? I do know that the Bourbon Distillery tours are !

On the bench :
A whole bunch of figures, Too many half built kits and a (gasp) wing thing

I don't know if there were 2000 tables but there were a lot! Have attended several times. It fills almost the entire South wing of the KY Fair & Exposition Center which is no small venue.

One time I went with a need for a replacement leather scabbard for a civil war picket (horse tie down - screws into the ground) Found it!

Have purchased many period German war photos there! A number of dealers fly in from Europe to attend and sell.

Strangest (most rare) item I think I ever saw there was a complete Commander's night vision scope off a Panther.

One year a "Special Guest" was Patton's Ivory handled revolvers that still reside at the Patton Museum, Ft. Knox located a few miles South of the Fair Grounds. Almost every year the Patton Museum brings in something for a special display.

If you are a serious collector of period militaria I would say you must attend! A large roll of US Currency also helps! 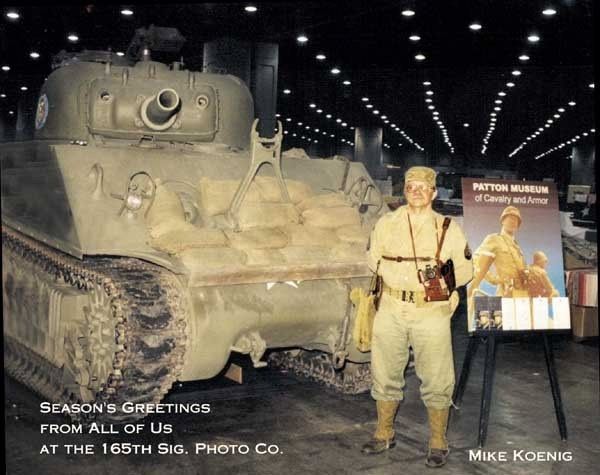 Christmas card image taken at the "Show of Shows."

PROFILE
ivanhoe6 said
Thanks Mike for the thumbs up on this event ! As they say in sports, "this will be a game time decision". Gotta keep an eye to the sky for bad weather. Got caught 70 miles from home in last week's snow storm and ended up staying 2 nites in a hotel, a pricey little misadventure.
Are you going this year ?
On the bench :
A whole bunch of figures, Too many half built kits and a (gasp) wing thing

PROFILE
165thspc (Michael Koenig) said
Not sure if I am going, but for me it is just an 86 mile drive so I could go both days if I wanted to and still sleep in my own bed.

My reenacting (and collecting) days are probably over - if I didn't have such fond memories of times spent in my gear I would probably be selling it rather than buying.