I have started comparing rails and sleepers and have started to measure different manufacturer's rails in order to see which one to be using for dioramas in the future and purchase in bulk...
I have taken a look at Trumpeters and MiniArts rails of German kits, therefore representing the Vignolrail S49, and Armor35 regauged russian rails, therefore they should represent R50 or R65? I am not familiar with Russian rails during WW2... Does anyone have interesting links and insights which one they were really using?

Here are the dimensions and designs of the three manufacturers that I have measured yesterday. I added the Armor35 in the lot, just for the comparison, but as stated before, I guess it should represent something else and not S49, but rather some Russian standard Vignolrail. Funnily, it does represent S49 in the best manner however. 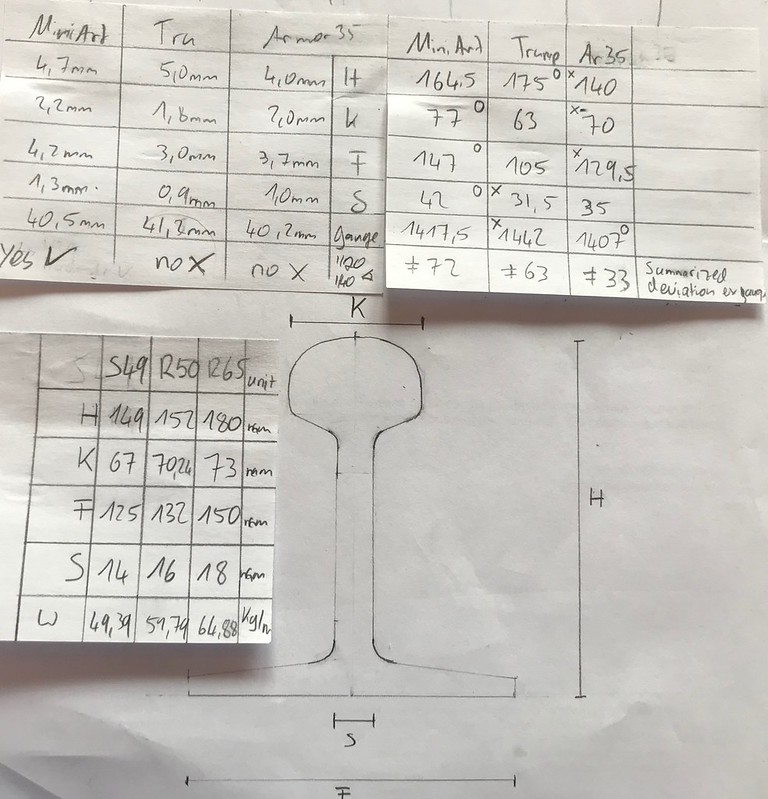 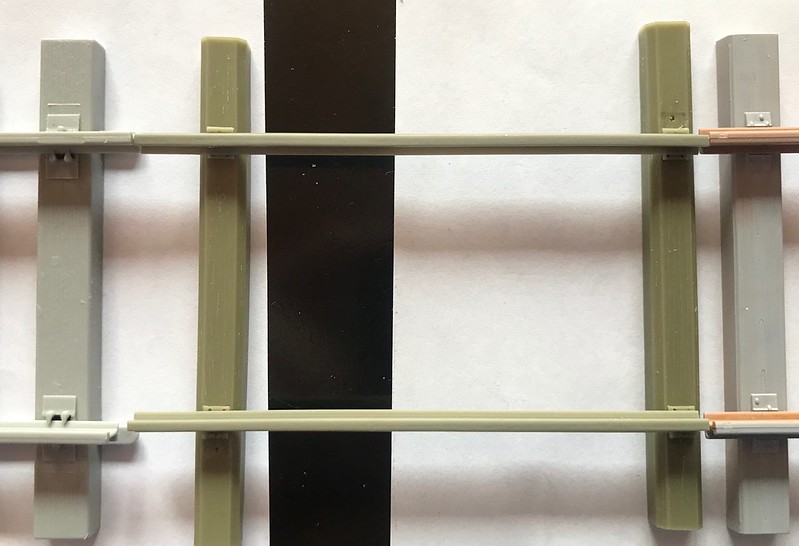 Another insteresting thing: Modern German rails do have a 1/40 wedge towards the interior: 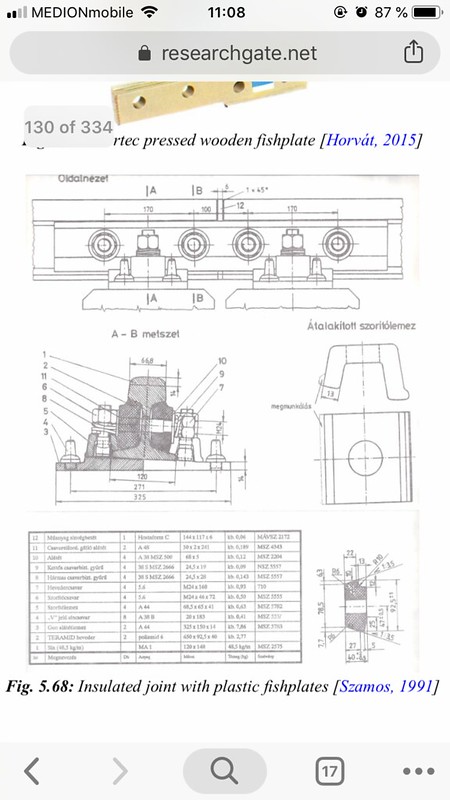 Historically, this was as much as 1/20, so "much" steeper. MiniArt has this angle immplemented with their rails, no other of these manufacturers does... 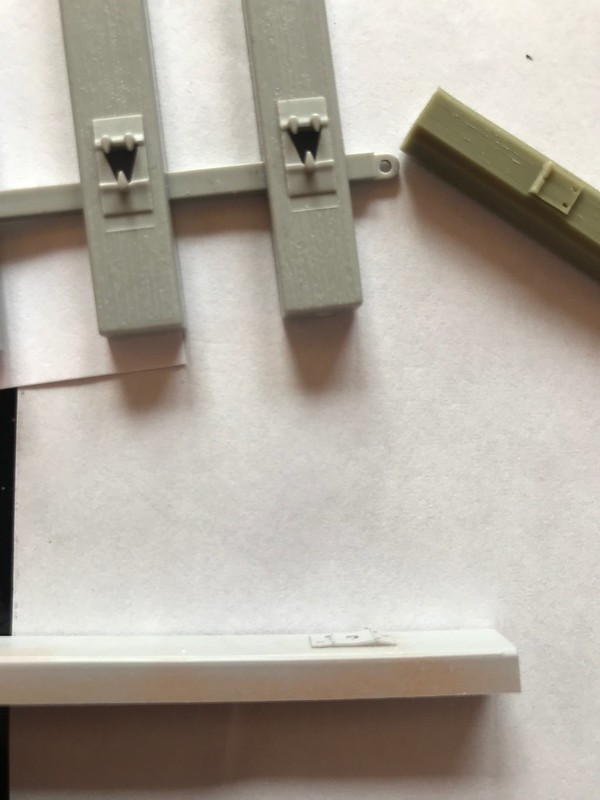 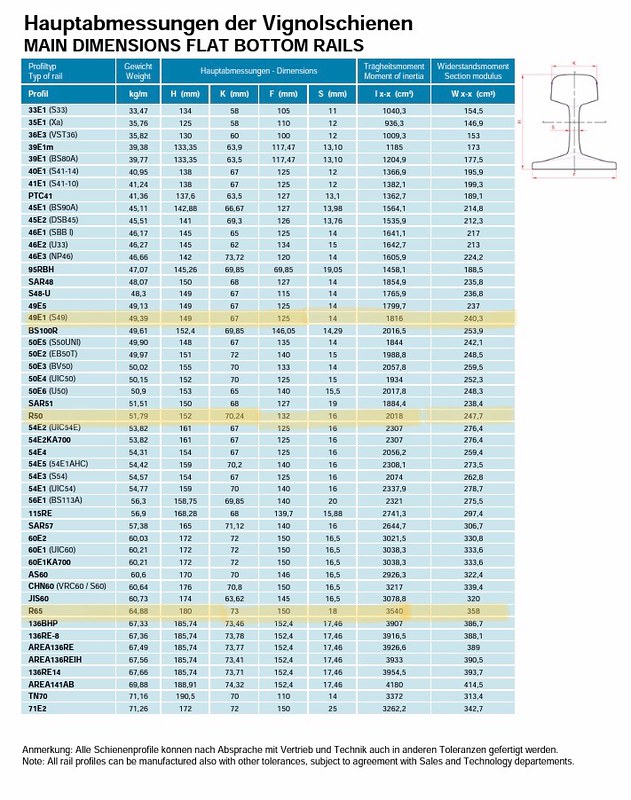 Here some steel and pressure analyses and the steel's impact on speed and load. 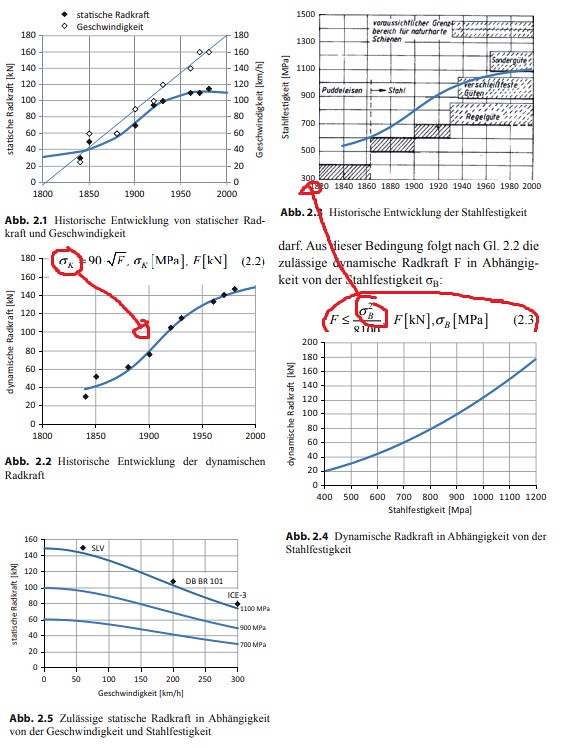 Some old rails in the black forest here are still using S49 today. As there is not too heavy and only slow (150kph and slower) traffic, lighter rails can still be used.

So what are your ideas and suggestions? I am just starting to learn things about rail profiles and stuff, so please hep me fill in the gaps and let me know if I got sth wrong.

PROFILE
RobinNilsson (Robin Nilsson) said
Wow, that was a lot of facts and analysis in there so I will not even attempt to compete with all that knowledge

One thought though: I don't think you should use only one single type of rail. On the railroad station in my hometown the two or three tracks used for traffic have heavier rails and the other two or three tracks have lighter/older rails.
Which rail to use would depend on what you are trying to show, is it a Leopold or some heavy SSyms loaded with tanks travelling on a main line or is it a small box car on a side track (grass growing between the sleepers) being loaded/unloaded by some tired soldiers?
Old and small dimension sleepers on a side track or larger/heavier sleepers, maybe even concrete, on a main line?

I do not believe in the 'one size fits all' approach.
Compare with scale figures of soldiers, they were all different sizes and using a single size in a diorama just looks weird (OK, maybe for some SS elite unit of dimensionally ideal Übermenschen, selected for duty with a tape measure to be exactly 188 cm tall

Edit: About the shape, wedging and top profile of rails.
Someone told me that it has to do with the interaction with the wheels. The wheels are not cylinders, they are cones so when a wheel gets pushed toward the outer rail in a curve the wheel diameter increase on the outside and decreases on the inside so that the whole axle rolls in a curve (roll a cone across the floor). This also keeps the axle centered on the rails so that the wheel flanges do not rub against the rails (would make a lot of noise and wear down the wheels and the rails).
Here endeth my knowledge.

Totally smart reminder regarding the different rails.
I was thinking about S49 as most was laid with it. Of course, some side-line tracks had S33 or so, and adding some would be sweet.
Sleepers can always be modified based on traffic-mileage and loads required for the respective lines, as you said.
This topic can be handled in quite some detail... That book is amazing! 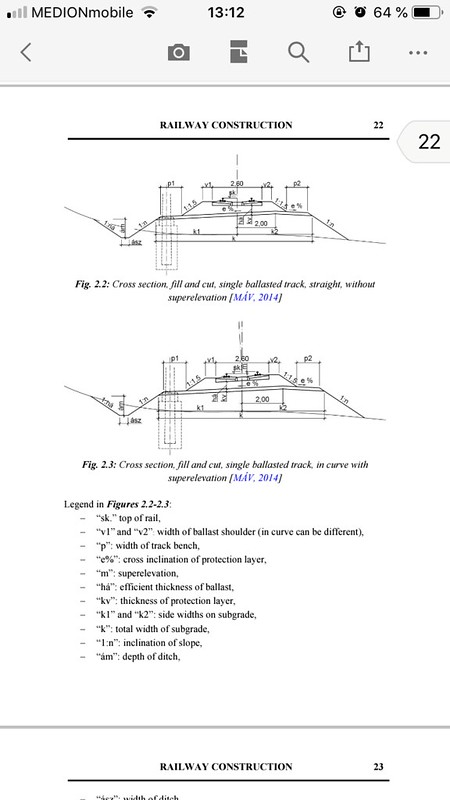 I simply wanted to see if someone has done more research into Russian and German WW2 rails and compared manufacturer's output. It turns out to be an interesting and quite maze-like topic... As to your wheels edit, yep, was explained in thet book in the same way, too.

Minute 5:25 of your video reminds me of this problem discussed in the rail construction book: 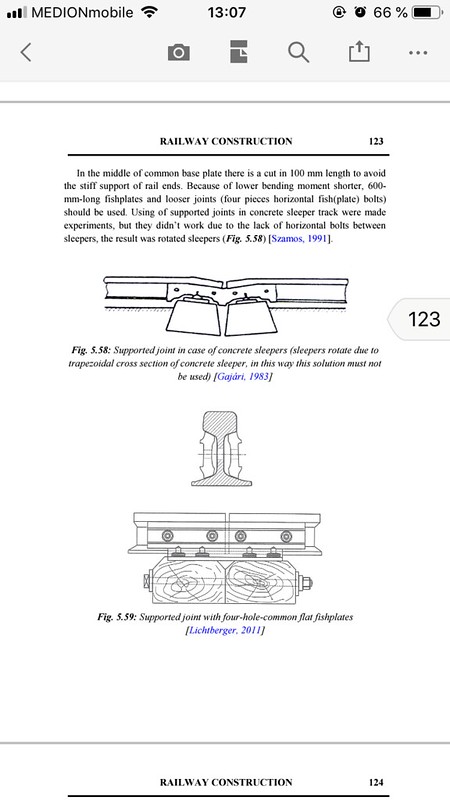 Ignoring the angle of concrete blocks and weak ballast...

Have a good day. Thanks for the help and input.

PROFILE
ivanhoe6 said
WOW Stefan, you have REALLY taken this to a higher level. Thank you for your in depth research !!
I've been curious about the variations between manufacturers' track widths (MiniArt & Dragon) and if I could easily mix the rolling stock from Dragon, Sabre & Thunder Road (in the stash) and Trumpeter's shunting diesel loco (future purchase). I don't want to start removing plastic or adding plastic to the trucks to make a consistent gauge rail line.
Now if I could get some 1/35th DB decals for a 50's/60's diorama as the rolling stock was used long after WW 2....

Thanks again for your hard work. It's much appreciated !

On the bench :
A whole bunch of figures, Too many half built kits and a (gasp) wing thing

PROFILE
SpeedyJ (Robert Jan) said
This is interesting.
First I second the words of Robin; :One size does not fit all", and that's because a brand like Mini Art sizes the rail to the flange they have on their wagon wheels, and that is exactly how it works, a good and realistic measurement, although it is off scale.
That goes for all brands, I'm pretty sure about that.

Fine scale modelers go for building from scratch, like seen on forums dedicated to this big scale trains, or even in little scales like H0 / N. Like FREMO(fine scale), they measure to the specific timeframe, location and railroad company that run the tracks. Germany for example had a wide variety of different track sizes(and railroad companies). But that changed at the beginning of the last century, Europe was facing a new era. Not only because of WWII, but a global approach that was already active from the years before and speed up after WWI. International trains from Amsterdam to Vienna, for example needed a secure and fast track. Industrial and less speedy tracks, like the regional 'Länderbahnen" & "Nebenbahnen" or industrial tracks for transport of goods did not, and still had their old tracks for a very long time. The bedding and sleepers, also a point of discussion, were pretty the same over all of Europe and got their replacements by maintenance and new standards, which is logical.
That said, when I'm coming to the point of laying my tracks for my diorama, I will order some slim Spur I metal track, with wooden sleepers, lots of work, but the realistic approach, (hahaha but that is 1/32 scale) but it comes very very close to the real thing. Most of the bedding will not be seen, like the sleepers being almost level with the sand on bigger stations.
From the pictures you'll see only the rail and fixing plates to the sleepers. Rest is sand and tarmac walkways anyway. Hight of the track and width is important to get a realistic scene I believe.

So measurement begins from your train and wagon to fit on a right surface with appropriate hight.