PROFILE
STLDALE (Dale E Wenzara) said
Which do you use and why?
Now that I am getting into WW2 1/48 scale aircraft I need to buy a set for small parts.
Thanks.

Which do you use and why?
Now that I am getting into WW2 1/48 scale aircraft I need to buy a set for small parts.
Thanks.

Well, I've been modeling for over 50 years now, so I have about 10 different pairs of tweezers I've collected over the years. My favorite tweezers though are a pair of curved tips, a straight fine point set, a little broader fine point, and a straight cross-tip pair. I recommend checking out the tweezer selections at Micro-Mark if you are need some inexpensive but well made tweezers.
VR, Russ

PROFILE
TotemWolf (Robert Nuckolls) said
The best for what?

The Ifixit Precision Tweezer Set that Rich suggested is great set to start with. Tamiya also has some good tweezers. As do other. What works for me may not fell right for you. So try some and find what you like best.

PROFILE
Steven000 (Steven) said
I got these very cheap tweezers from ebay, great stuff for what you pay for 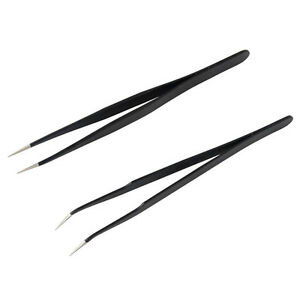 PROFILE
retiredyank (Matthew Nethery) said
You get what you pay for. I ordered tweezers from Aliexpress. They were very cheap. I thought they would, at least be made of aluminum. WRONG. They were tin and practically useless. However, I have had great luck, with eBay. I picked up a pair of bent tweezers, for not much and they are excellent. You may want to check Squadron. Their tweezers are fairly good, unlike several of their other tools.
Ideals are peaceful. History is violent.

PROFILE
barkingdigger (Tom Cromwell ) said
Locking tweezers are a modeller's best friend! (The kind where you squeeze to open them, so they naturally stay clamped.). I have a set with straight ends, and a set where the ends are cranked. They are great for decals (grip, dip, and let stand...) but you need to be careful they don't accidentally launch small plastic parts.
"Glue, or Glue Not - there is no Dry-Fit" - Yoda (original script from Return of the Jedi...)

WWW
JPTRR (Frederick Boucher) said
Wilder. I have his straight tweezer and curved tweezer. They are sharp as needles yet easy for me to grip and handle.

PROFILE
kevinekstrom (Kevin Ekstrom) said
I purchased a set of 5, all are different and have specific uses. They came in a nice storage case and all have been used extensively over the years. I also purchased some smaller tweezers over the years, I think I have about 10 total.

I purchased my set through Micro-Mark. You may be able to find the same set on eBay cheaper.

and I was pleasantly surprised, for the ridiculous price they are not bad at all

PROFILE
timmyp (Timothy E Parker) said
I have the traditional type of tweezers (like what Revlon sells at the drugstore), as well as tweezers from suture removal sets (and the accompanying scissors). Those suture removal tweezers have a very fine tip, and are great for grabbing rigging thread on a sailing ship model. The locking tweezers are great, too - I have several that are 10 inches long, and about a dozen in the 6 inch length. They're a blessing!!