PROFILE
Cocat2517 (Pete) said
Hi
Just built my spray booth from correx plastic board. Question is... do I really need to fit an extractor fan as I only paint with acrylics? Do acrylics put out harmful fumes as well?

If I do need one would something like this be ok?

It draws the fumes into a carbon filter.

PROFILE
Cocat2517 (Pete) said
Alternatively, as my desk is near a window, would a fan blowing toward the open window suffice? I only airbrush a couple of times a month for 2-3 hours at a time.

PROFILE
retiredyank (Matthew Nethery) said
All atomized paints are bad for you. I relegate myself to 1 hour sessions and use a hepa certified spray mask. I do not currently have an extractor set up, but plan on installing one.
Ideals are peaceful. History is violent.

PROFILE
Kevlar06 (Russ Bucy) said
Any aerosol in concentrated quantities is harmful. In short, if you've constructed a spray booth without ventilation, you will be concentrating the aerosolized particles in a smaller space. It would be better to eliminate the booth entirely in that case. In my military career, I worked as a test officer in an assignment where toxic agents were quantified by both toxicity and concentration. The science is simple-- the higher the parts per million (PPM) or parts per billion (PPB) of milli-microns of agent (in this case hobby paint) to the smaller the cubic foot (CF) of air, the more toxic the mixture. Given this principle, you could spray an ounce of enamel or laquer based paint in a 3000 CF ventilated room, and have almost no hazard. On the other hand, you could spray a 1/2 ounce of acrylic paint in a 4 CF box and have a much higher hazard level. Therefore, if you are hoping to contain the paint inside a spray booth of 4 CF, without ventilation, you may have a problem as you'll be breathing the same air for 2-3 hours a week--unless you leave that window open. I suspect the small fume extractors you refer to won't have enough air volume passing through them to extract harmful particles (PPM/PPB) over a 2-3 hour painting session. One way to check is to find out what the Cubic Feet per Minute (CFM) of airflow through the filter system is, and compare it to the CF of your spray booth. Your fan and filter CFM should at least be equal to the CF size of the booth as a rule of thumb. Having given this lengthy explanation, I simply paint enamels and lacquers in my garage, which is about 3000 CF, and I leave the garage door open about 3 ft with a box fan running while I paint. If your room is large enough, and you can open a window, you'll probably be OK. Just remember it's not the toxicity of the paint that counts, it's the concentration-- a spray booth without a ventilation system is a concentrator. There is another solution-- and that would be to obtain an MSA approved mask, but that won't vacate the air in the room, it will only prevent inhalation of the paint particles.
VR, Russ

PROFILE
Cocat2517 (Pete) said
Thanks for the lengthy reply Russ. How do I calculate the CF of my booth?

I have 3 windows open about 1 metre from where I'm spraying, the window openings measure approx 50cm x 30cm each. I have a small fan blowing toward the windows.

I just bought these masks to wear, should I upgrade these too?

Reason I ask is my desk space is very limited, adding an extraction unit to my booth will also mean needing a new desk, but I'm on a budget (hence the self build booth). Not getting lung cancer is more important though!

PROFILE
Kevlar06 (Russ Bucy) said
Pete,
Forgive me-- I didn't even think to see where you were posting from! It's easy to calculate your needs by multiplying width and height by a factor of 2 to get the cube. In your case it will be cubic meters-- which looks like you may have a little less than a cubic meter of space by my calculations. The European standard will be about the same as the US when it comes to airflow through a filter unit, but will be expressed as Cubic Meters of air. Right off hand, I'd say you are safe with the windows open and the fan going. The mask you have is probably adequate for your needs with the windows open, but it's best to check what the Hepa rating is for masks. On this side of the pond, the standard is set by Mine Safety Appliance (MSA) ratings. You should see what the manufacturers says about the micron screening properties of the mask-- most disposable surgical type masks should be adequate for acrylics given your situation. I'd think with acrylics, as long as the Windows are open and the fan is on you should be Ok. As I mentioned before though-- it really depends on the concentration of particles in the air. If you notice the room beginning to fog, even slightly, it's time to quit painting and ventilate. I used to build ship models for commission, some of which were quite large, and I'd paint the hulls with a Badger 155 Anthem with a large paint reservoir attached and opened on full at about 22-30 PSI. I could generate quite a cloud of aerosolized paint, so when that happened I'd always be sure to wear my MSA approved filter mask. Depending on what you are painting, how much paint you use, and your airbrush pressure settings, you may never create that type of situation. But if you do, make sure you have the right equipment-- and a replaceable filter mask is what you'd need in that situation. These days I paint much smaller projects on my garage workbench, at about 8-20 PSI of pressure maximum with no more than a half-cup full of paint on a gravity fed double action Peak C5. In my 3000 cubic feet garage, I don't even wear a mask as the room air volumeand ventilation is adequate for short painting sessions.
VR, Russ

I'll see if I can find out the hepa rating for those masks.

PROFILE
Das_Abteilung (Peter Smith) said
I have something of a compromise solution. I too paint out in my single-car-size garage. Many CF. But I have a home-made spray booth using a large translucent polypropylene storage box. Cheap, disposable, the light gets in and acrylic paint don't stick. Probably about 6CF.

I wear a mask and I don't spray that often: much less than once a week. And I only use acrylics thinned with alcohol.

As a quick solution to get the mist out of the 6CF box and into the wider many-CF garage and reduce the local concentration I adapted a 12cm PC case fan through a hole cut in the side of the box - the top of the box when I use it laid on one side. I did use a fabric filter frame also intended for a PC fan to catch any large particles. It runs off a little 12v transformer I use for a mini drill, but I also made a battery box for 8 x AA in case that isn't available. Makes it portable.

I think it cost less than £25 to make and took less than a couple of hours to put together. 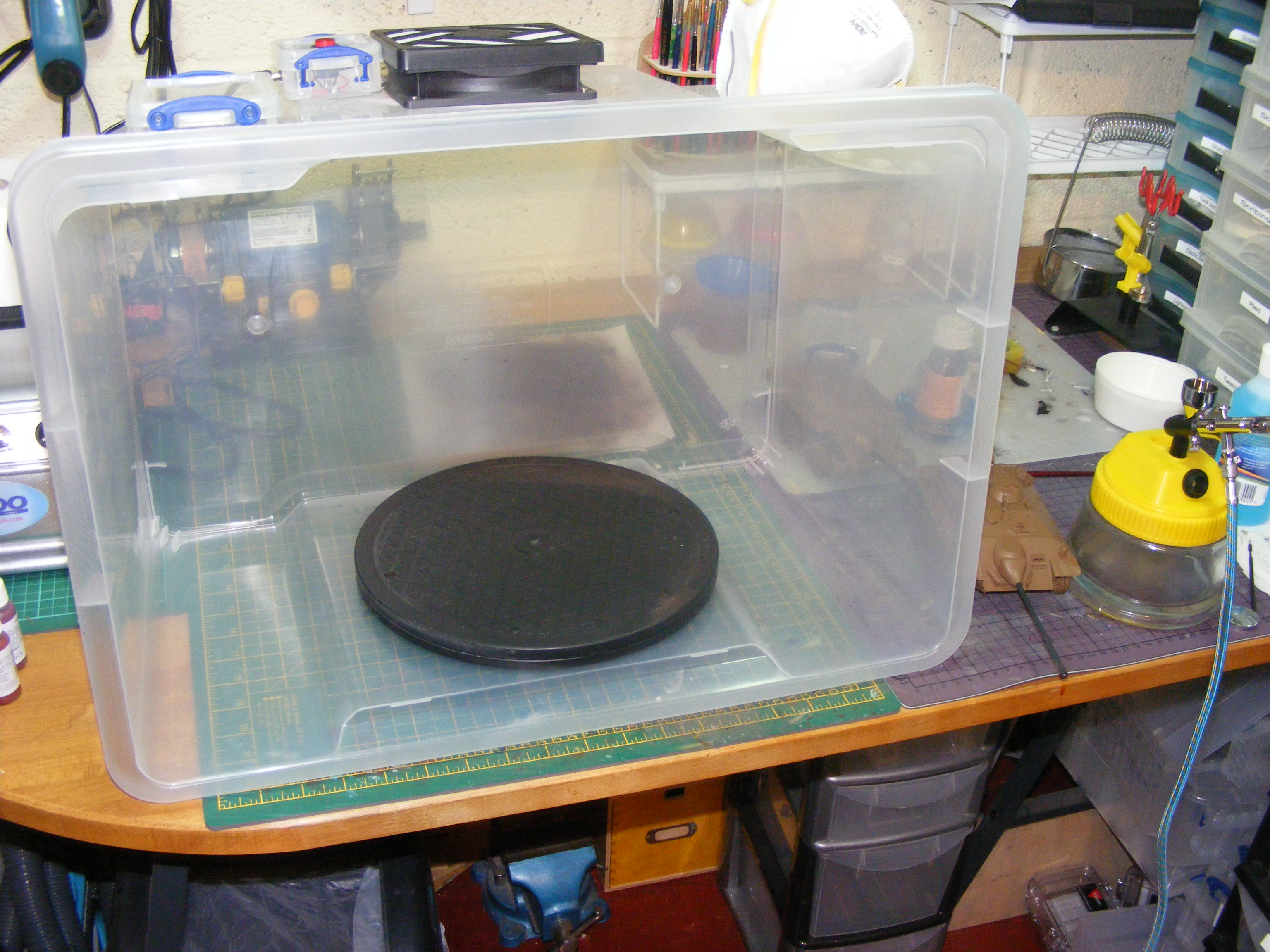 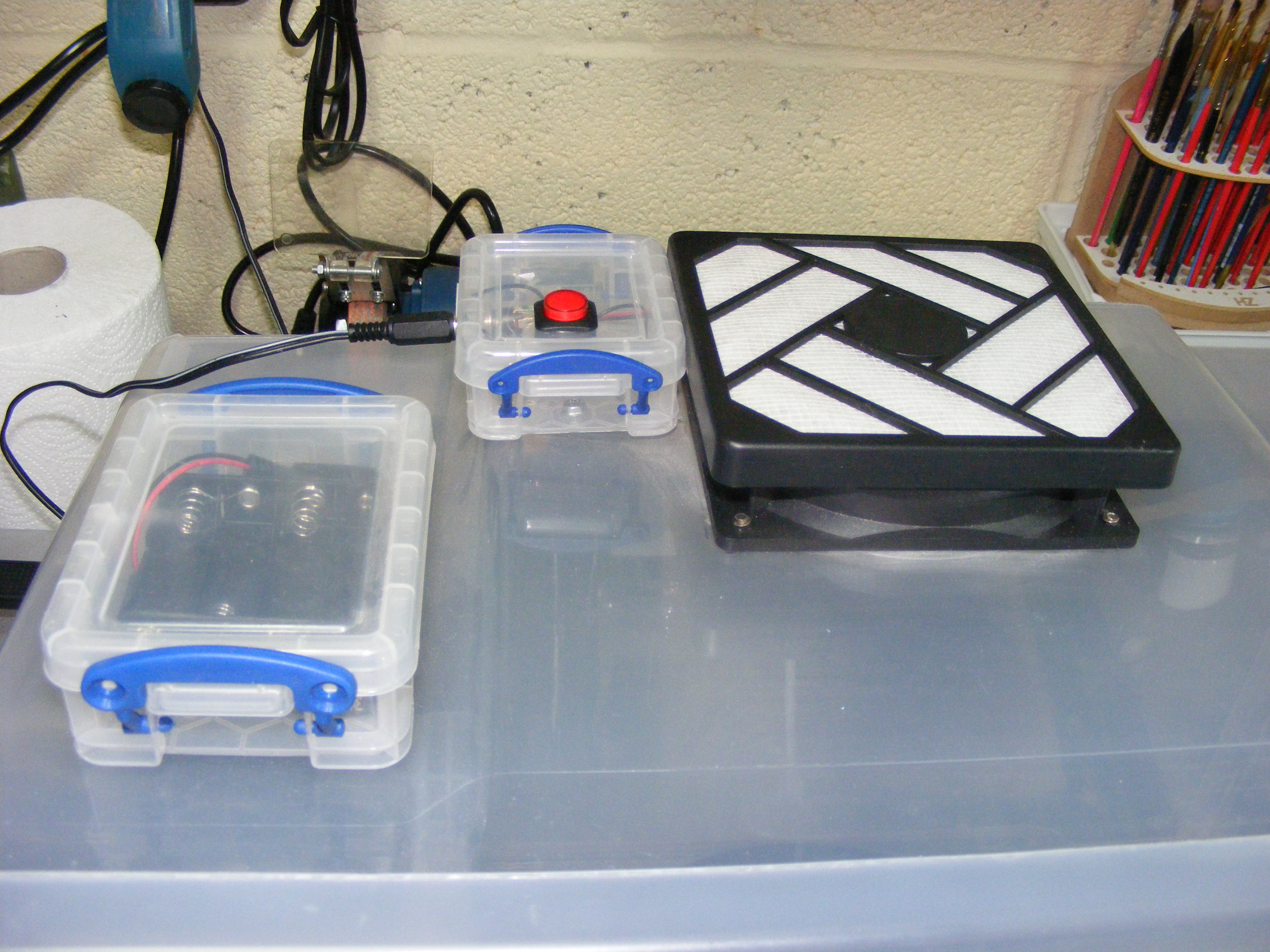