PROFILE
Steven000 (Steven) said
Hello everyone,
This may not be the right place to ask this question, but I need some help on figuring out a drawing with 'caliber' dimensions, which is a unit new to me...

I want to convert the drawing to 'mm'

Now, I did search the web for ansers and found out I should multiply it with inch;

BUT, the drawings I have makes totally no sense, it's way to small?

I'm I doing something wrong here? I read something about caliber-lenght-barel-size calibers? (don't understand) 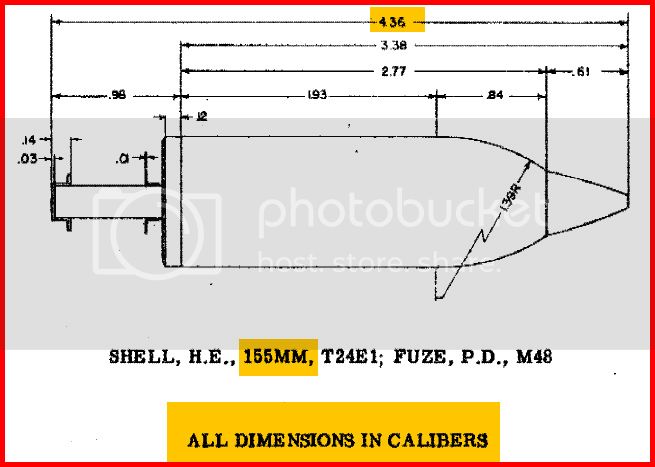 Can someone please help me out?
Many thanks!
Steven

PROFILE
Pave-Hawk (iain) said
Caliber length is a multiple of the weapon caliber and nothing to do with converting between inches and mm.

In your drawing example if 4.36 is a caliber length and you're weapon caliber is 155mm as highlighted, then the actual length is:


Don't you feel more like you do now than you did when you came in?

Many thanks Iain for the very fast reply!
I apologize if this was a very stupid question, just never saw something like this before

PROFILE
Pave-Hawk (iain) said
No problem, I only learned about using caliber as length measurements not too long ago myself

Don't you feel more like you do now than you did when you came in?

PROFILE
RobinNilsson (Robin Nilsson) said
The problem is that the word caliber, or the abbreviation cal, is used in two ways.
For small arms it is used to denote the diameter of the barrel, .50 cal means half an inch, a 38 Smith & Wesson has a barrel diameter of 0.38 inch et.c. Then there are different names for different sizes of the shells, the size of the gun powder load et.c. Note that in this usage there should be a decimal point in front of the numbers, saying 38 S&W should actually be 0.38 S&W but people are lazy ....

For larger weapons caliber is used to denote the length of the barrel as a multiple of barrel diameters so a 52 cal barrel for a 155 mm gun has a length of 52 x 155 mm = 8.06 meters. Note that the caliber of the barrel is 155 mm.
The measurements in your drawing above all refer to the caliber as a sort of measurement unit, the shell could theoretically be re-scaled to another weapon with a different bore or barrel diameter.

To confuse matters further there is the British way of using shell weight to define the caliber ....

PROFILE
Steven000 (Steven) said
Thanks for the additional info Robin, I wasn't sure why someone would choose such a system, but as you're talking about re-scaling for other barrels it makes a lot more sense.

PROFILE
varanusk (Carlos Martin) said
Thanks a lot Robin, that was a question I had never managed to solve. Now it is clear

PROFILE
RobinNilsson (Robin Nilsson) said
Don't take my word for it !
I was just guessing, somewhat based on sound engineering practices but it's still a guess

Some parts, like the igniter, may not be scalable so it would only work within certain limits.

PROFILE
barkingdigger (Tom Cromwell ) said
IIRC the confusion stems from the old way of measuring shell sizes - with a metal calliper. The resulting length between the calliper points could be used as a sort of scale-bar or basic unit of measurement, so barrel lengths could be defined as so-many callipers of the shell diameter. Thus a German 75/L40 gun had a barrel length 40 times the diameter of the 75mm-wide shell it fired. Knowing the calibre of a gun was an indication of range and accuracy, since a short stubby barrel would let the shell wobble and would waste precious thrust if the gases escaped before being fully burned up.
"Glue, or Glue Not - there is no Dry-Fit" - Yoda (original script from Return of the Jedi...)