PROFILE
Markus1 (MH Ostrowski) said
In the 70's Inf. BN's in Germany had anti-tank plt.(not inf. tracks) armed with Dragon launchers. Does anyone know how the reloads were carried inside the track, and how many??

WWW
HeavyArty (Gino P. Quintiliani) said
Below is a load plan for a standard M113A2 showing one Dragon round on the right side track sponson. I have not seen a specialized M113A2 AT load plan. I am assuming more Dragon rounds would be stored on he tops of the track sponsons where ever they would fit. 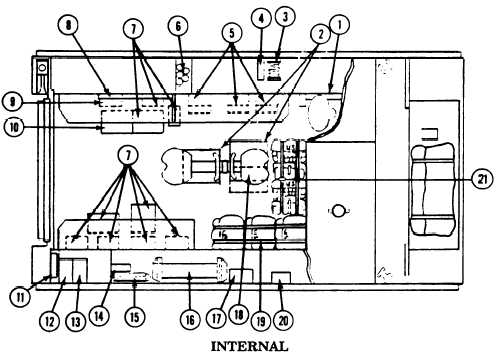 I was with 3D AD in the FRG, 1981-82. In my platoon, the 19Delta tracks carried three M47 Dragon rounds. Two of them were stowed as per item 16 in the diagram Gino has provided. These were for the mount on the TC hatch. The third one was secured where items twelve and thirteen are. It was kind of leaned into that right rear corner for easier access for the dismounts.

Since these tracks carried no more than four total personnel, there was a lot more room available than the tracks carrying a grunt squad had. I imagine a war time load out would have seen more Dragons being carried.

At that time, the actual AT platoons in my battalion were 113's with the exposed M220 TOW and the rather ad hoc "TOW CAP" ballistic protection shell. If I remember right, the M901 ITV was issued to the CSC's during the summer of 81.

The Dragon was issued to each infantry squad and as stated each M113 had three rounds carried. In 1980 the M175 Dragon mount was fielded to infantry and cavalry scout units. This was device that went into the M2 .50 caliber HMG mount where the M113 crew could then place the Dragon and its SU-36 sight on to. I understand it gave the firer a bit more stable platform than his shoulder and little more protection than in a sitting position.

Each M113 equipped infantry company also had two TOW ATGM carriers, first as the mentioned TOW CAP (the TOW system in the cargo hatch of a M113). Also, each infantry battalion had an Anti-Tank company of 12 TOW carriers in three platoons of four TOW carriers (and one M113 for the AT platoon leader).

The M901A1 Improved TOW Vehicle (ITV) began fielding in Germany in 1980 and went through 1981. It replaced the TOW CAP in infantry companies, were an addition to infantry scout platoons, divisional cavalry, and ACR cavalry troops that did not have any TOW equipped vehicles. This was unique to Germany. The US based cavalry units had TOW vehicles. Do not know the reason for that. ITV's were removed from the infantry battalions in the early 1990's (I know of no ITV's that took part in Gulf War I).

I do not know if the combat engineers in 1980's had the Dragon ATGM. They do now have the Javelin ATGM.

If any one has more info, please let us know. Any questions, please ask. T'anks.

ITV's were removed from the infantry battalions in the early 1990's (I know of no ITV's that took part in Gulf War I).

According to multiple sites on-line...

"The M901 ITV first saw combat in Operation Desert Storm, where it achieved at least 14 kills with no losses, in a repeat performance of what the anti-tank BRDM-2s had accomplished 18 years prior. This also occurred despite the low confidence in the M901 held by US troops at the time (which did not change after the war, despite this success)."

I can't find any official AARs that state this, but it does sound likely since I know they did deploy there.

PROFILE
Treadhead12 (Duane Parsons) said
Gino, thanks for the info.

PROFILE
Treadhead12 (Duane Parsons) said
Paul, thanks for the link.

PROFILE
ptruhe (Paul Truhe) said
Might be a picture in Concord's Blitzkrieg in the Gulf but I don't have this book.

Also found "Task Force 2-4 Cav-'First In, Last Out': The History of the 2d Squadron, 4th Cavalry Regiment, During Operation Desert Storm" which mentions:
"Of particular note is that the D/4 Cav was organized as a regimental cavalry troop with four platoons. Its two tank platoons consisted of M60A3 tanks and two scout platoons, each with three M113s and three M901 improved TOW vehicles (ITVs), along with a three-tube M106 mortar section."

Intrigued as to what paint scheme they were in.