PROFILE
ebergerud (Eric Bergerud) said
Just got Badger 200G - Alclad specifically recommends this brush for a clean coat, and I'm guessing they're right. Anyway, I did run into some problems with it on the first run: sent it back to them and they fixed it no complaints - noted that "needle bearing was too tight."

Here's the problem. What's the best way to remove the needle from the brush? As not all 200's are the same, below is a pic of mine: 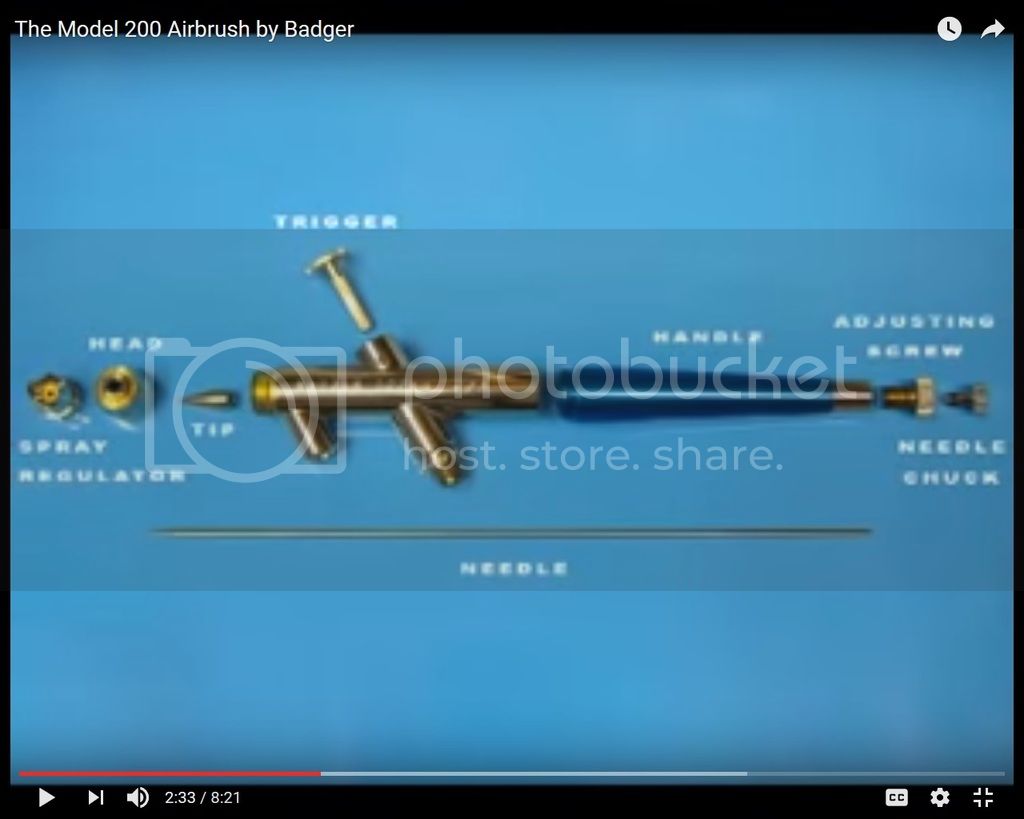 As you can see the adjusting screw and the needle chuck are seperate, and neither are attached to the needle. (They appear to be integral in other 200s). On the YTube video on the 200 Ashley Brayson - who I believe is a Badger spokesman - says you are to loosen the chuck away from the adjusting screw and withdraw the needle out by itself, with both chuck and adjusting screw remaining with the body. (Brayson shows how to break down the entire brush, but claims it won't be often needed.) It was this step that brought me to grief before. Other videos have the needle removed with the adjusting schrew attached: this may be because of a different part, or perhaps this could be done with mine also. If anyone out there has a 200G and uses Grayson's method, I'd like to hear about it before doing anything the thing at all.

Also one gent mentioned that cleaning the whole needle was not often necessary because it it doesn't move every time you pull back the button as it does in a double action. Is that true? I clean brushes after every major color change and would certainly do the nozzle regardless. On the other hand, less needle cleaning would keep the needle out of harm's way (in other words outside the brush, where clumsy users can stab it into something metal) often, which sounds good too. Anyway, advice appreciated.

A model boat is much cheaper than a real one and will not sink from under you.

PROFILE
retiredyank (Matthew Nethery) said
I have no experience, with this or any other single action. However, it appears that after removing the tip, needle chuck and retaining screw you can pull the needle out through the front of the brush.
Ideals are peaceful. History is violent.

PROFILE
ebergerud (Eric Bergerud) said
That's how I clean my double actions - through the front on withdrawal, insert through the rear. It might make sense here too, but the set-up is different with one bearing playing the role of the springs in a double action. One other kind soul replied who has 200s and believed taking both screws and the needle out the rear was the proper method. As noted, I've screwed things up once - really do want to get this one going. I think it would fill a real niche in my too large airbrush collection. (I think I noted this. Alclad paints recommends an internal mix single action for its paints which are supposed to go down evenly with good flow. They even box one of the 200 models with their name on it. So it's not a matter of the single action being easy.)
Eric
A model boat is much cheaper than a real one and will not sink from under you.

I spray Alclad, with my Badger double actions and have never encountered a problem.

Just got Badger 200G - Alclad specifically recommends this brush for a clean coat, and I'm guessing they're right.... one gent mentioned that cleaning the whole needle was not often necessary because it it doesn't move every time you pull back the button as it does in a double action. Is that true? I clean brushes after every major color change and would certainly do the nozzle regardless. On the other hand, less needle cleaning would keep the needle out of harm's way (in other words outside the brush, where clumsy users can stab it into something metal) often, which sounds good too. Anyway, advice appreciated.
Eric

Eric,
In regards to the needle in this particular airbrush, it's true that it does not move when the trigger is depressed. That's the way most single action brushes work. I've used an airbrush now in one form or another for over 50 years, including variations of this Badger 200G, the design of which has been around for a while. I have never removed the needle from the front for cleaning, always from the rear. In fact, I never remove the nozzle between colors, until I'm finished painting, when I break down the brush for a thorough cleaning. I always remove the needle from the rear for cleaning between colors. I'm not sure I really understand the problem you're having with the needle bearing being too tight, since the needle doesn't move during use-- unless you are having trouble adjusting the spray pattern while spraying, which is not the intent of this brush. I understand why Alclad recommends this brush for "clear" coats, because it gives a nice, uniform spray finish at one adjustment point, but as others have said, you can use a double action brush for any Alclad finish as well, I do all the time, including thier clear coats. I seldom use my Badger 200 for much anymore, largely because it was not designed for rapid adjustment during use. I primarily use double action Paasche Millenium, Badger 155 Anthem, or Peak C5 for all my airbrush applications requiring adjustments. Alclad paints dry quite rapidly too-- this could be why you are having problems moving the needle if paint is drying around the nylon needle bearing during use-- this could be a problem using a single action airbrush with a fixed air pressure compressor where you can't adjust the pressure down enough and too much air gets back to the bearing.
VR, Russ

PROFILE
ebergerud (Eric Bergerud) said
The problem was that the chuck was extremely tight and had to be loosened very gingerly. The last time I did this, the adjustment screw no longer gripped the needle well enough to move it out, effectively crippling the brush. It appears that the problem wasn't with the screws, but with the needle bearing inside being too tight. I wouldn't have brought up the matter if I hadn't already killed the brush - luckily Badger fixed it for free and considered it a defect. It came back and the chuck was really on there tight. On two of the three YouTube videos covering the 200, the users took the needle out with both the chuck and adjustment screw attached to the needle. It did work, but seemed very clumsy. Thought I'd check in with owners and see if there was a "right" way to do this - one that wouldn't disable the brush. One Badger 200 fan said Brayson was definitely right - you loosened the chuck even if it took some serious work the first time. Then I checked the Badger instruction again. There was nothing about cleaning the needle - indeed after looking at it again, it certainly appears that Badger doesn't recommend removing the needle for normal cleaning at all. However, in case the needle got stuck or was bent, they said "carefully remove the chuck." That did it. Wrapped my pliers in masking tape and carefully turned and tugged. The chuck came undone, and the needle came out just fine. So it's like the screws were never the problem - but the needle bearing was preventing the adjusting screw from moving the needle at all. Live and learn. BTW: I'm not new to airbrushing. I've got two Harder Steenbecks, an Iwata and two Paasche double actions. (I do have two houses 2,000 miles apart - a partial excuse.) But I'd never used an internal mix single action - and the parts are significantly different.
I think I understand why Alclad recommends this brush. (Check their web site to confirm.) Uber-guru Paul Buzik who has most of the videos from his "Modeling Outside the Box" website on YouTube, strongly recommends a fan pattern spray gun for applying primers and base coats. (He considers brushes like my HS Evo "detail brushes" with limited use.) You've got to pay a ton to get a fan spray and more for an airbrush that sprays a fan pattern. If that kind of thing was ideal, the Badger 200 might have been "ballpark" - Alclad claims that their paints want consistency more than anything else - something that a Badger 200 would give. If you haven't seen Buzik's material, I really urge checking it out on YouTube - the guy has rare skill and makes very classy videos.

I'm sure good modelers use double action brushes on Alclad all the time - but it's a challenging paint to many. I think Alclad wanted to go out of their way to show that normal wisdom was not optimal for their paints. Sprue Brothers and no doubt other sites sell the 200 in an Alclad boxing - the siphon type specifically.

Anyway, thanks all for the advice. Things appear just fine now.
Eric


A model boat is much cheaper than a real one and will not sink from under you.

PROFILE
retiredyank (Matthew Nethery) said
And, here I was about to offer you one of mine as a loner.

PROFILE
Kevlar06 (Russ Bucy) said
Eric,
Glad you worked it out-- I'm curious about the 200G in the photo-- is the handle plastic or anodized metal? My old Badger (which is over 40 years old) has a more rounded end on the handle and is not tapered like the one in the photo, and is made of anodized metal. I've never had any problems with it, but I wonder if the tapered handle is prone to distortion so the nut tightens. Yes, Paul Budzik is a great "how to" source, and an occasional contributor here--- his work is outstanding-- and I'm using one of his scribing techniques right now on an Alclad finish for a 110th model of the Mercury Atlas rocket. I know Alclad recommends this brush for coverage, but I seldom use my single action brushes anymore, probably laziness more than anything else, as I keep three brushes on my workbench-- a fourth just makes it more difficult to choose, and frankly I prefer gravity flow over siphon.
VR, Russ

PROFILE
ebergerud (Eric Bergerud) said
The brush pictured is a 200H - siphon feed. I was looking at the rear end which is identical to my 200G which is gravity fed. If you can ignore the parts for gravity flow, my airbrush looks the same as the 200H, down to the color. They sell a 200-20, which is called a "detail brush" and its body is gray and has three rings around it.
I've got a nice four brush holder - sits right above the compressor, no reason not to fill it. I took Buzik's advice and bought some Duplicolor sander/filler lacquer primer and it works really well (sprayed outside that is). So if Alclad is on to something, the Badger might be useful for primers or base coats. And I don't own a smart phone - so all the money saved there can be frittered on modelling stuff - it's only fair. Anyway, we'll see. Judging from the helpful response to this post on three boards, the Badger 200 does have fans. I'll report when I put it to the test.
Eric

A model boat is much cheaper than a real one and will not sink from under you.