Modeling in General
General discussions about modeling topics.
Hosted by Jim Starkweather
Taking the workbench on the road

PROFILE
sauceman (Richard Saucier) said
Gonna be on a tasking for the next 5 months and yes I'm gonna bring my workbench with me.

I got a little tote for the tools and supplies and an ammo can for the paints and solvents.

Can anyone give some advice of what to bring or not to bring. I'm also gonna bring my air compressor

One of the serious problems in planning against Canadian doctrine is that the Canadians do not read their manuals, nor do they feel any obligations to follow their doctrine.

PROFILE
ComaBlack (Simon James) said
Looks like you're got just about everything. Be sure to bring some spares though, as things tend to get lost or break 'in the field'.

Actually it depends on what you are modeling, which to me would dictate the appropriate tools, glues, paints, brushes, etc. I would say not to bring or attempt to add weathering pastels or other like products, since transportation could be an issue, but that's your call.

It would be great for you to provide a AAR after you return on what you experience and decide what you needed and didn't need. At least you will have something to do and keep you out of mischief.

ESSAYONS!
"Man does not live until he looks to the future, and that is his salvation in the worst of times.".... (Author Unknown)
AMPS #2102

PROFILE
sauceman (Richard Saucier) said
It's gonna be an OOB build for sure. This is gonna be one of the kits that I'm bringing. 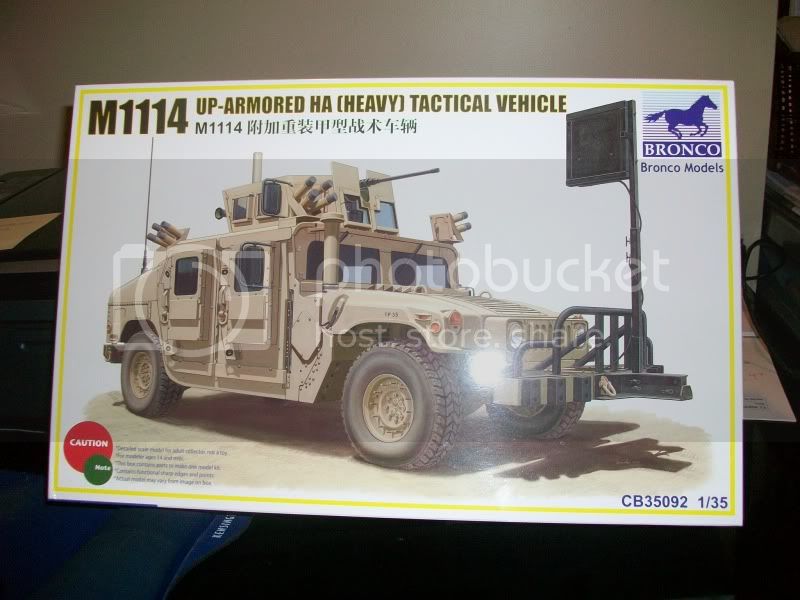 One of the serious problems in planning against Canadian doctrine is that the Canadians do not read their manuals, nor do they feel any obligations to follow their doctrine.

PROFILE
bmikk1 (Brandon) said
Hey Rick, you look well prepared to me tool wise. Have you given any thought on how you will transport the finished product home?

I had to transport all my built models when I moved two years ago, all survived without injury. 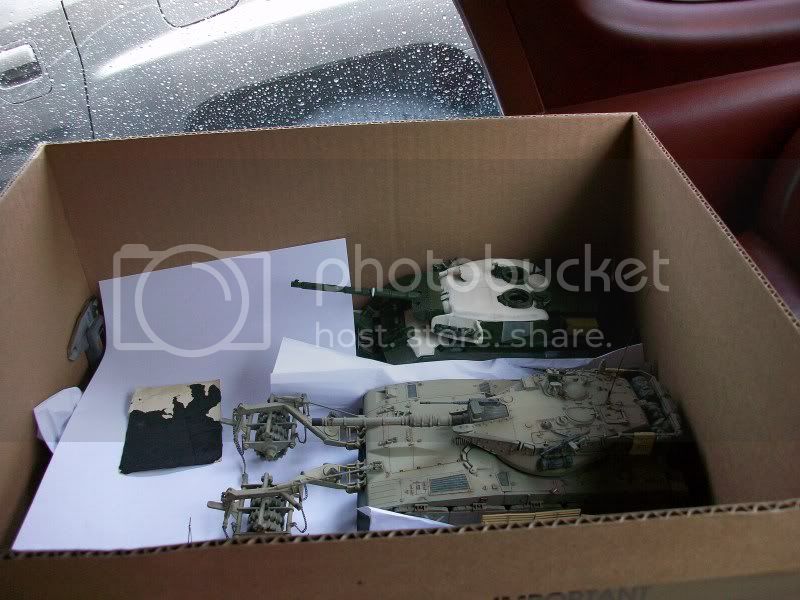 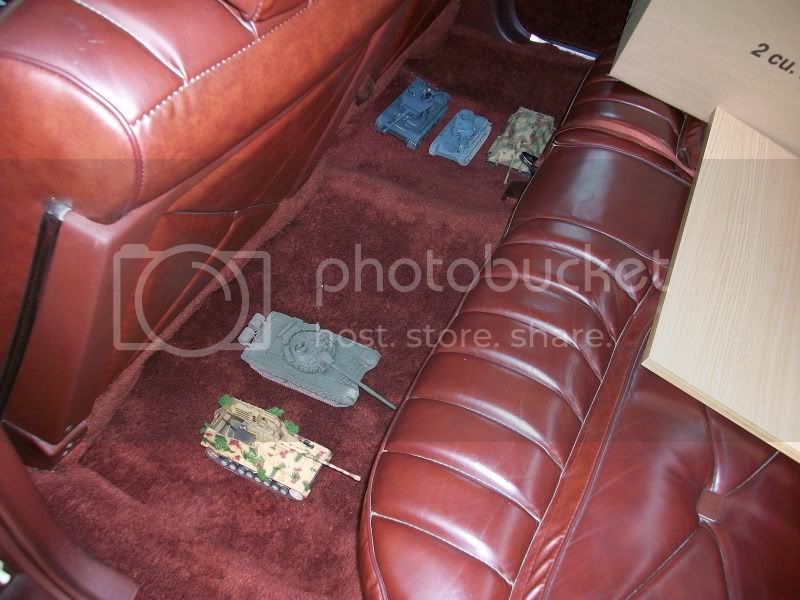 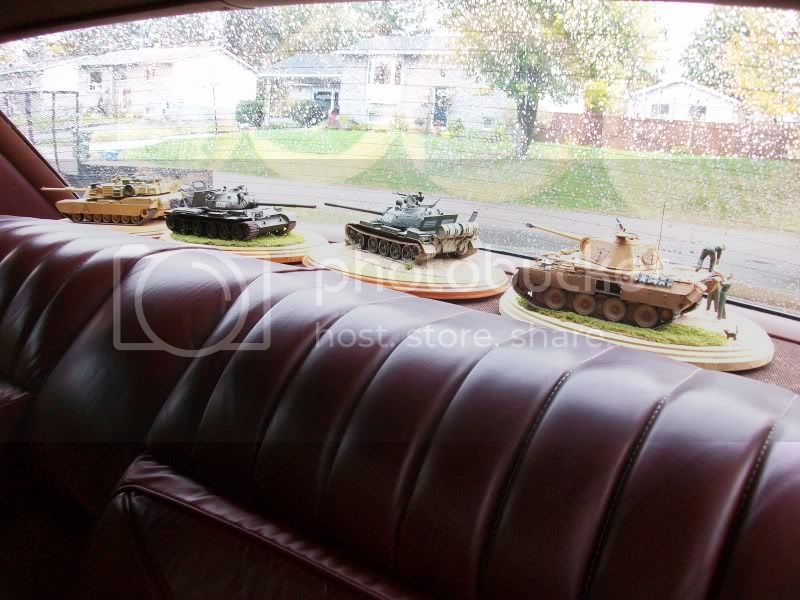 
One of the serious problems in planning against Canadian doctrine is that the Canadians do not read their manuals, nor do they feel any obligations to follow their doctrine.

Hope you don't leave the models in the car....

PROFILE
fireman110 (neil stephens) said
Hey Rick
I use a Plano fishing tackle box for my stuff when it traveles with me you can get a lot of stuff in them and the close up well and can be locked if you need to leave them.
I have duplicated the tools i use the most in the box and even managed to find a decent folding light that was the biggest problem i had lighting. Dont forget to pack extra glue for when the accidents happen and you spill it. Its not like you can just run out to the local hobby store .

PROFILE
bmikk1 (Brandon) said
The back window of your car makes a great display case!

PROFILE
dioman13 (Bob Davis) said
Hey Rick, I was a trucker for 26 years and the last few I took a set up with me. Usually I took a kit and prepared it for final assembly at home. I would take the kit and tools, (glue, knife, sand boards,etc.) in a snap lock container and another for the kit. A few old wash cloths to tuck it in and prevent damage. Being in a truck is harder than a car as the suspension is for weight and everything inside takes a beating, even the driver. I would do all the build up in sub assemblies and even paint a bit when stopped for the night. Very delicate parts would be done at home along with the final assembly and paint. I would also take reading material on the subject. This way I would have it ready for the bench at home and save alot of time when I got home which was usually 1 1/2 half days or 2. The wife didn't like me being gone all week and then sitting down at the bench

So this was my way of getting things done on a time budget. But it look as if you'll be in a car and that is more forgiving than a tractor trailer. Just enjoy the time you have modeling and remember to pack it up tight when you're traveling. If you forget something, hobby shops are all along the road, but remember what you forgot so you can add it to your modeling first aid kit when you get back. Didn't see any thinner in there or brushes.
There is no return policy on time spent

PROFILE
retiredyank (Matthew Nethery) said
I recently set up a bench away from home. Found out, all I really needed was a knife, glue and sanding foam. However, I did not take my compressor, ab, or paints. Resolving rather to paint the kit, once I got it home. I completely assembled Tamiya's 1/350 Battleship Missourri in Arkansas and transported it home safely. I found this really set me about making sure every cut was precise and glue was exact. If you have a few kits that haven't been built, you may be better off not taking the entire bench.
Ideals are peaceful. History is violent.

Also, my story - don't take a portable workbench camping unless you have one of those bus type houses on wheels. I go tent camping, and learned the painful way that Friuls, a folding table, and a forest floor are a bad combination!

WWW
imatanker (Jeff Tucker) said
Here's my fix for on the road building.It's the top to an old school desk that had been discarded.It makes a great workbench as I can pick it up and stash it in an unused bunk in the camper.It is heavy enough to stay in place while on the road,is hard enough to cut on,and my wife can't complain about my stuff taking up space

and ended up here

There you have it.One portable workbench,Jeff
The building lamp is lit.Build'em if you got'em.

Matthew, I think that the blue filament your refering to is actually rolls of different guage wire for grab handles and stuff.

For my tasking I will be set-up in the barracks so thankfully won't be travelling around the country, hopefully won't get too many complaints from the paint and glue odours LOL!


One of the serious problems in planning against Canadian doctrine is that the Canadians do not read their manuals, nor do they feel any obligations to follow their doctrine.