WWW
SdAufKla (Mike Roof) said
The results are in, and by all accounts it was a great little show!

You can view the full listing of awards and medals on our website:

We hope to have some photos up soon, so check back often.

Also, we plan to repeat the event next year, so put on us your calendar and come on by!

'Til then, happy modeling!

Here's to all your hard work, Mike.

ESSAYONS!
"Man does not live until he looks to the future, and that is his salvation in the worst of times.".... (Author Unknown)
AMPS #2102

I was really proud of the way that everybody in the club pulled together and worked.

For those not familiar with AMPS judging, the models are judged by teams of four model-builders who are trained in the AMPS rules and led by an AMPS certified Table Captain judge.

This is quite a bit different than most other modeling organizations. Another difference is that the models at an AMPS show are usually judged before they are put on display. Here's a picture of Jeff's judging team at work: 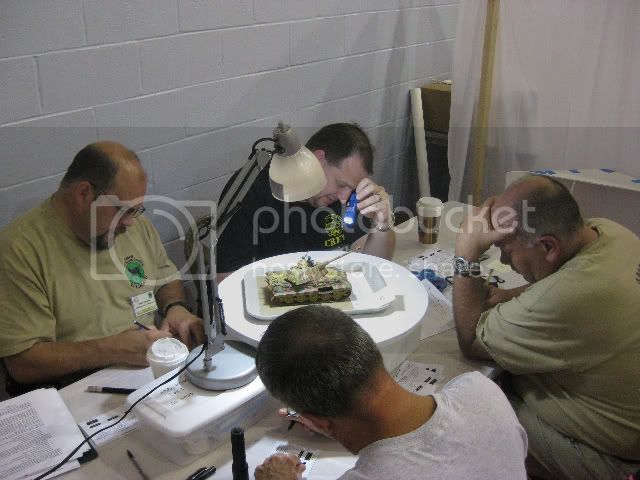 We had as many as three judging team working simultainously at our show, and the AMPS international show keeps up to six teams working continously over the entire show.

It's very labor intensive and time consuming, but each model is judged and scored against a set of criteria established in the officialrules, and each judge also gives written comments about that model. These score sheets are returned to the model-builder at the end of the show, so that he can benefit from the scores and observations that the judges had about his work. This is done for every model entered into the show for judging.

Providing this feedback to participants is a fundamental objective of AMPS, and one that directly contributes to the organizational goals of helping ALL of our members (and not just the "winners") become better model builders.

Awards (gold, silver, and bronze medals) are mode to the MODEL-BUILDER for his demonstrated craftsmanship ccording to his skill-level (junior, basic, intermediate, or advanced) and not the model, per se. Thus, in any given category, the modeler receives only a single award for his his highest scoring work no matter how many models he entered in that particular category. Again the objective is to recognize, reward and encourage the model-builder to develope his craft and skill.

So, Jeff and his judging cohorts were really the guys who made it all happen! (BTW, that's Jeff with his back to the camera in this picture.)

It was a great show, and I'm already looking forward to the next one.

WWW
SdAufKla (Mike Roof) said
A 2011 contest photo slide show is now up and running on our website:

But I would be negligent to not mention to eveyone else here, that in the above photo of the judging team, that's Dave in the black t-shirt.

Dave was also the Table Captain on that team, and when he wasn't honcho'ing that team, he was mentoring the new judges to get them certified as Table Captains themselves!

Involving everyone who wants in the judging and feedback system is one thing that makes AMPS the great organization that it is! This steepens the learning curve for everyone, newbies and old hands alike.