Scratchbuilders!
Built a model or part from your own materials lately?
Hosted by Mike Kirchoff
What used to be a Rommel's Rod

PROFILE
PunyViking (Kjell) said
Hi! I'm not sure this is the right part of the forum to post this, but the model has seen it's share of scratchbuilding.

The model started it's life as a Monogram Rommel's Rod, and ended up as something other than that. I'm not quite shure what I should call it at this stage, so far I have called it X-Rommel's Rod...

I started this build 8 - 10 months ago. It has been a hard build, not because the parts, just because I could not make up my mind to how to build it. I had no plan, just making it up as it got glued together.

What I did to this poor kit?

In the begining I didn't like the thought of it beeing a staff car, so I brought out my beloved plastic saw and the started the surgery... Chopped off the back seat, and transplanted the back of the passenger compartment right behind the drivers seat.

After I did that, I came to look at the tracks of this vehicle... Not looking it's best! One thing lead to another, and I got some tracks from someone on the norwegian ipms forum (Thanks). The tracks came from a afv kit I think, not quit shure, with all the wheels and the bottom part of a early tiger. And as luck came into the equation, the bottom of the tiger was just the right width to fit where the track part of the rommel rod, so a transplant was quit easy.

The new tracks was of course in a few million pieces, but sticking the pieces together was not a small undertaking. But at last both tracks was finished. (only broke apart 10-15 times..)

But with new tracks, the rear fenders was totally wrong! It needed to be 1cm wider at each side... Not a problem, just a challenge to my beloved plastic saw! A long cut to each side, some styrene sheets, alot of superglue and tamiya liqud extra thin cement and some select words to howl to the stubburn piece of plastic in the heat of the moment...

When I got this far, I dry fitted the vehicle and didn't like what I saw. The hood was way wrong. And I spent a few weeks looking for a remedy. I found it at last in a swap meet. Guess it's from some -30's ford, don't know - don't care. it looks right and thats what's the part I care about.

Seats found in one of my other kit's. I don't have a parts bin yet. this is only my third finshed model... (started alot, but finishing models is not my cup of tea)

The headlights was a new problem, how to make them... In the end I mounted a pair of frenched headlights from the ends of a couple of ballpoint pens(!) and a lot of putty.

Then there was the issue of the front pair of wheels. The stock wheels was to puny, and I looked all over for something to replace with. the answer was a hotwheel diecast monster truck. I made rims from a lego wheel and the original hubcap.

Rear lights was made from some short bits of brass pipe and epoxy putty and some red transparent plastic from my "could maybe use this some day" box. The exhaust was also made from some brass pipes.

Orginal engine with new exhaustpipes. Heatshields from a thin tin can pressed over a dentist tool to make the pattern.

All metal finishes was made with treasure silver wax. A quite extraordernary product! paint with Vallejo modelcolor, some citadel acrylics and weathered with some cheap artist oil paint.

The rest is as the say: History...

Picture time! I have some pictures of the build process if someone would like them to be posted. I for one like to see pictures of finished models... 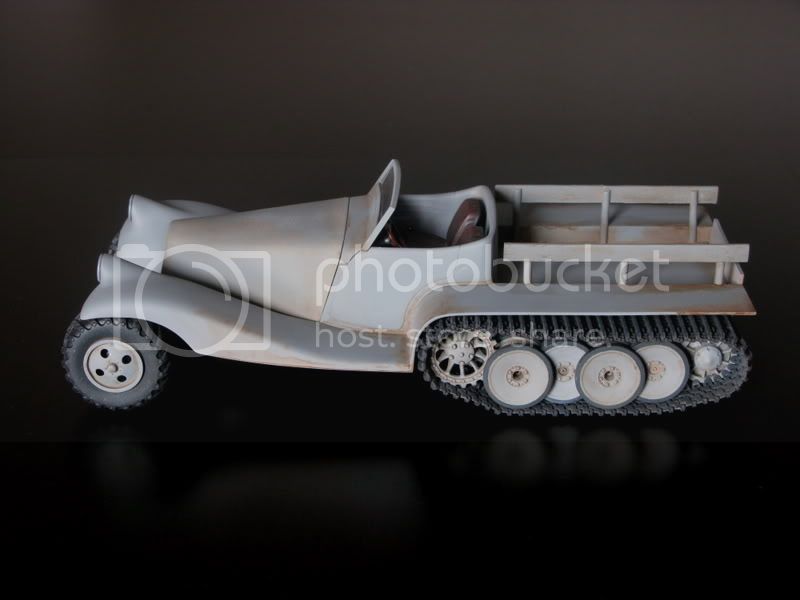 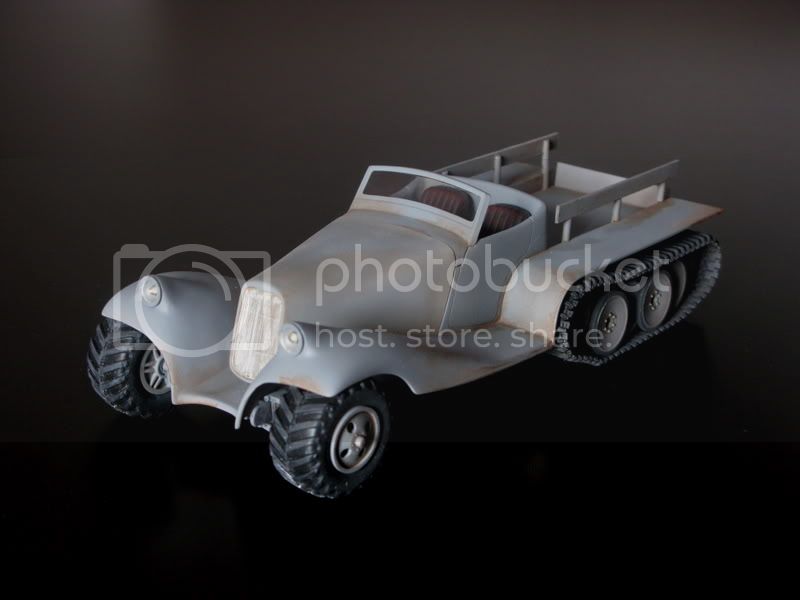 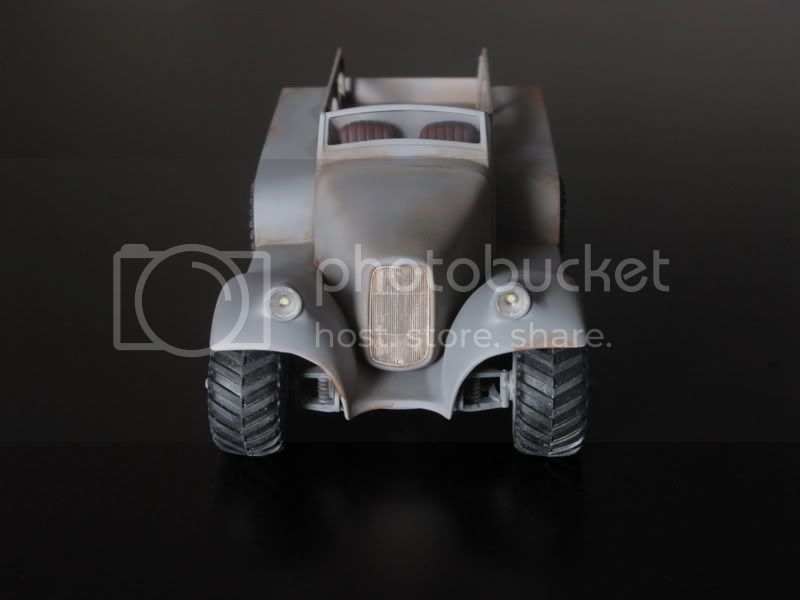 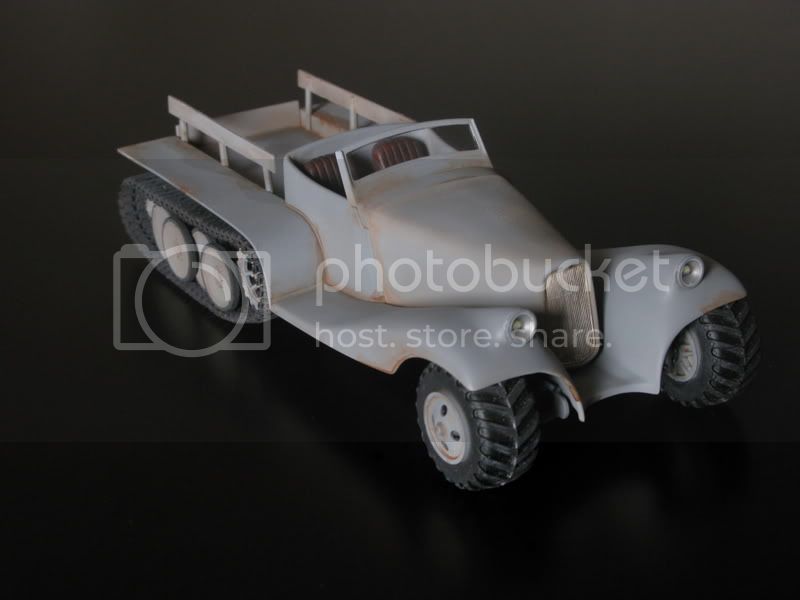 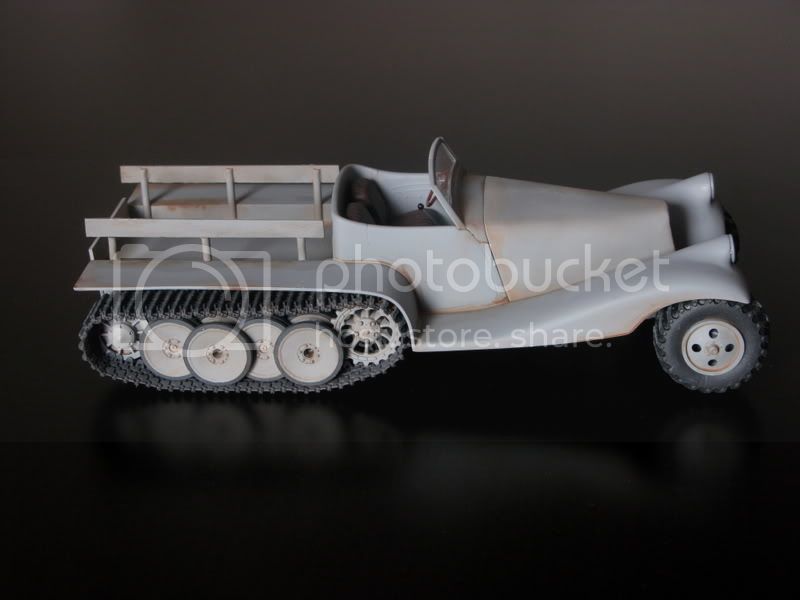 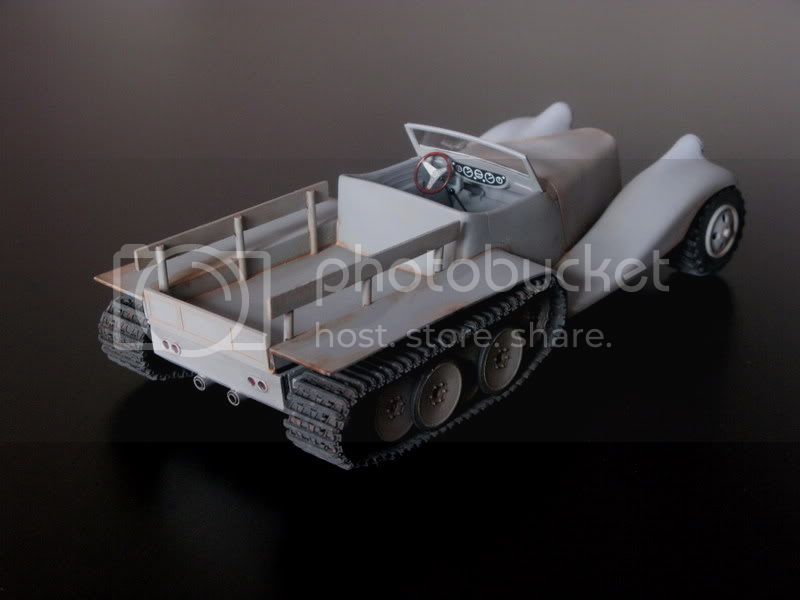 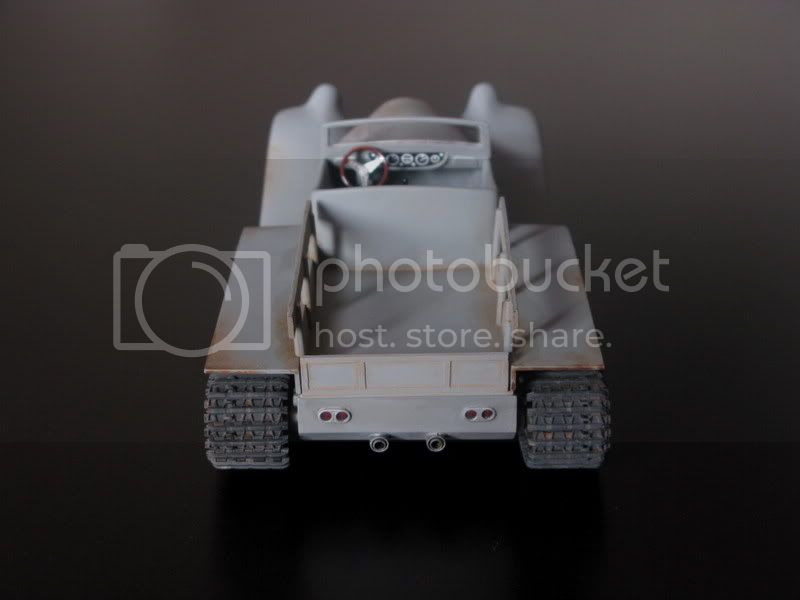 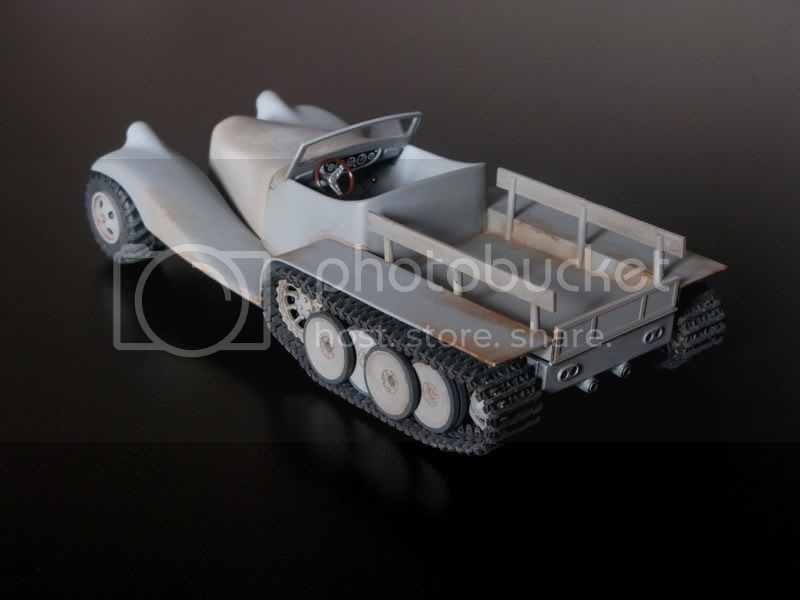 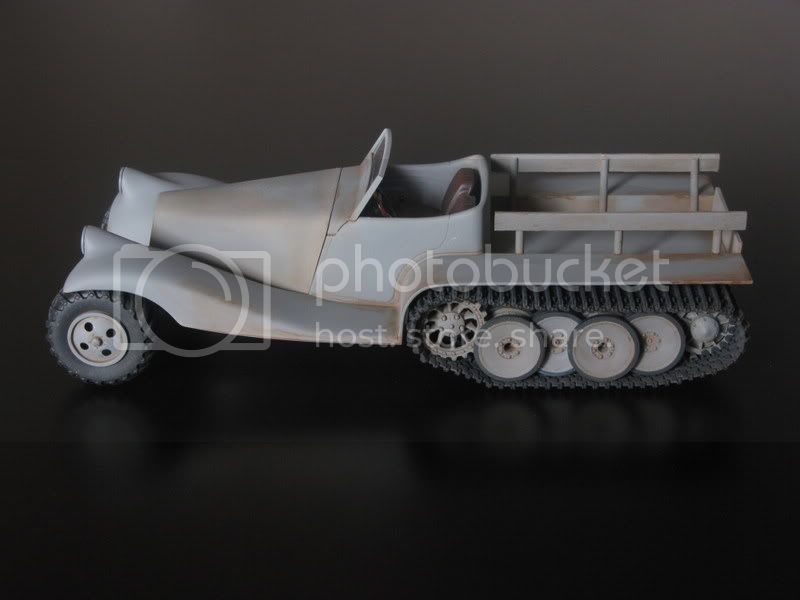 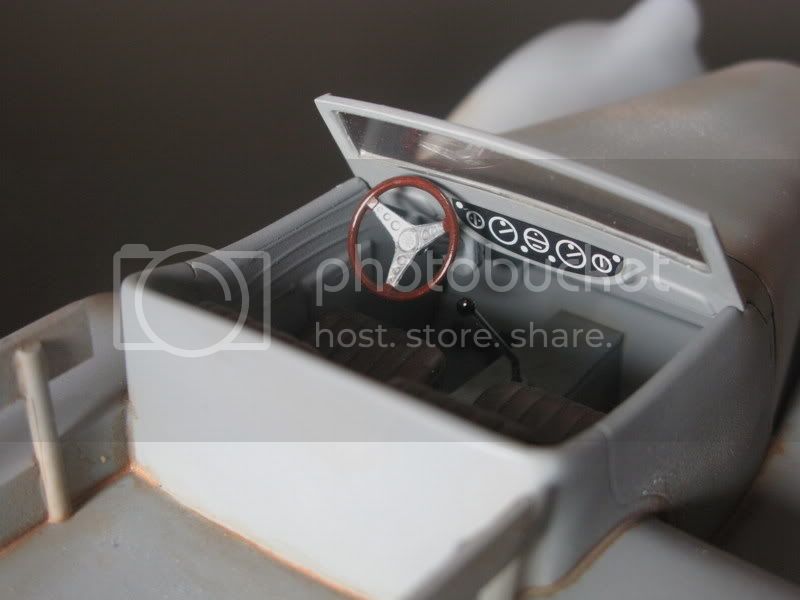 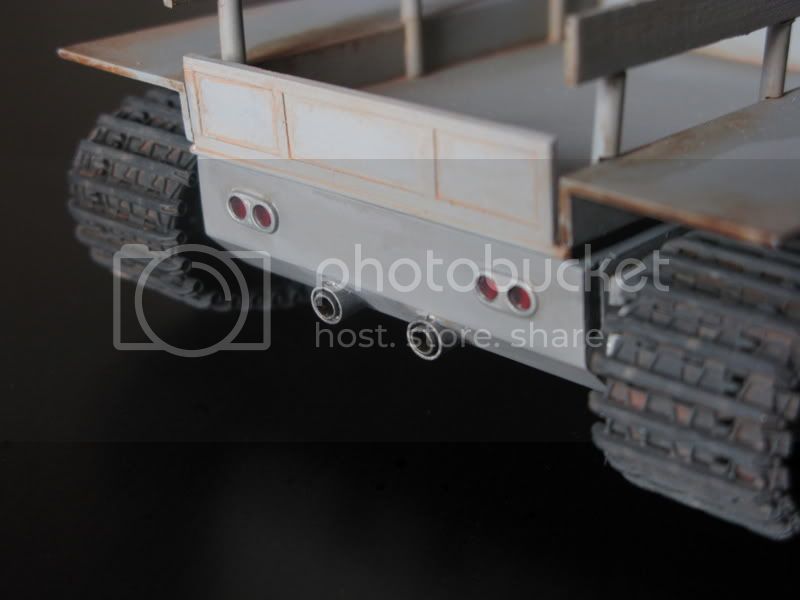 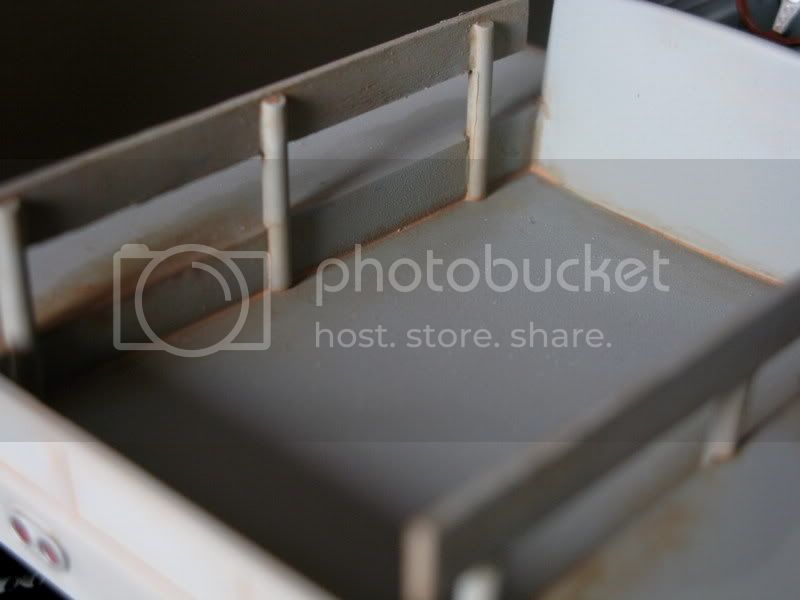 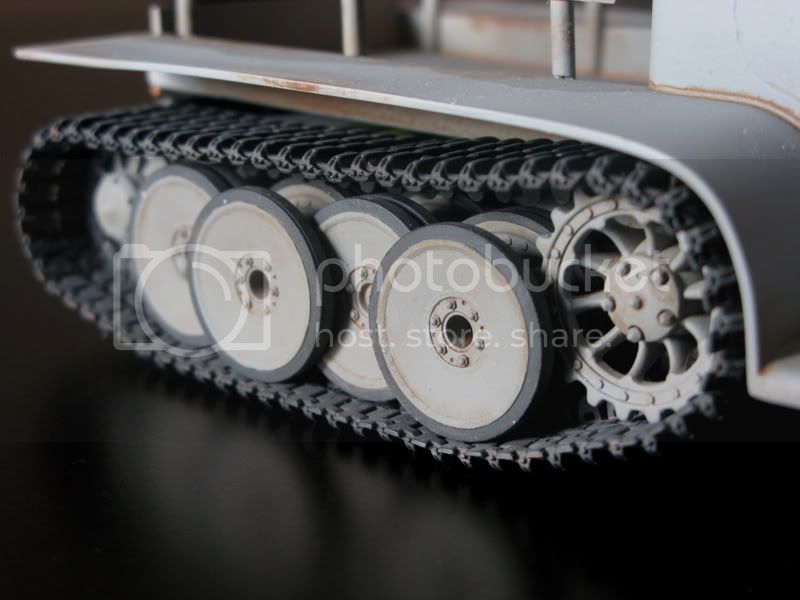 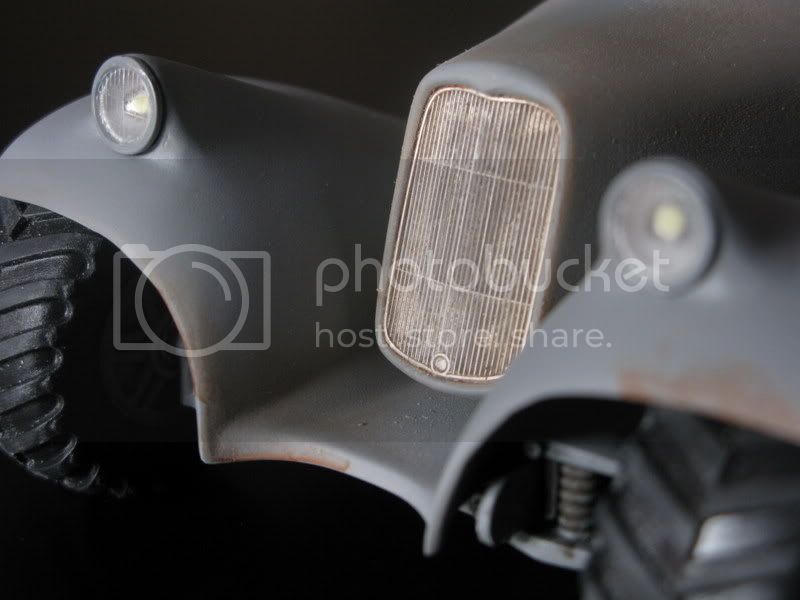 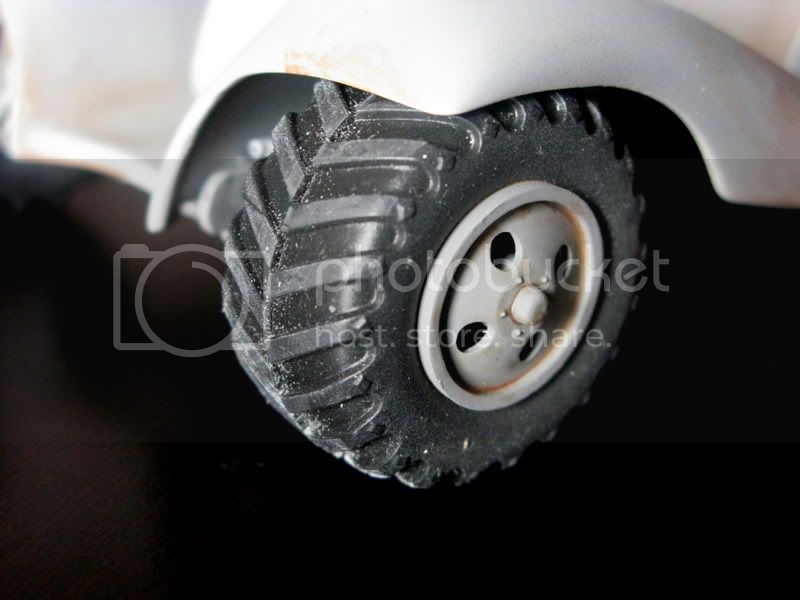 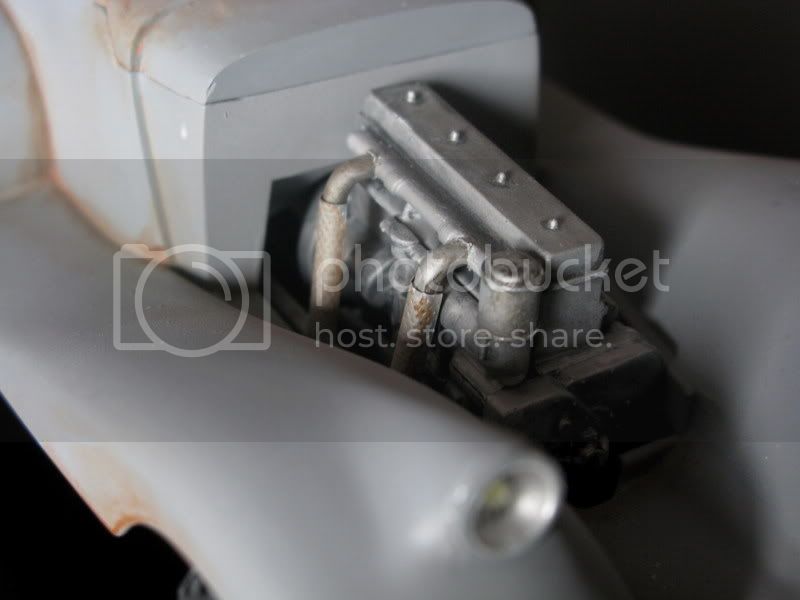 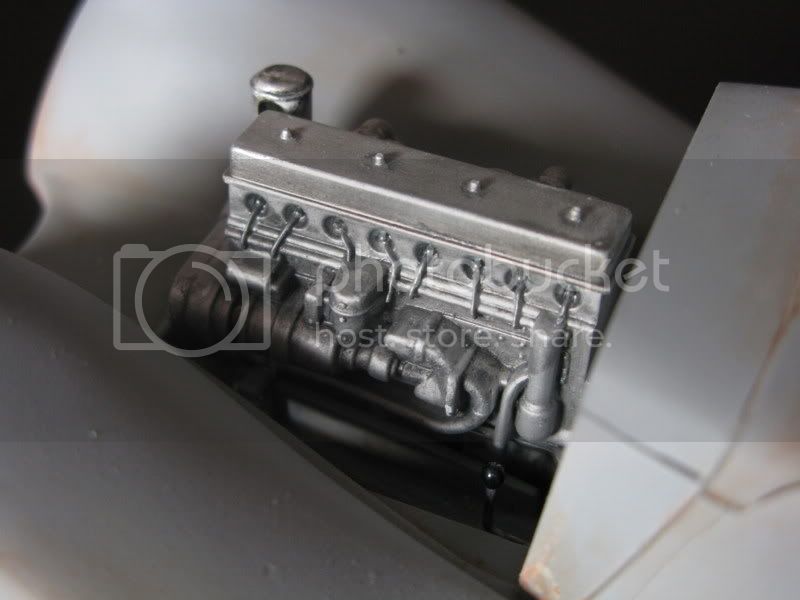 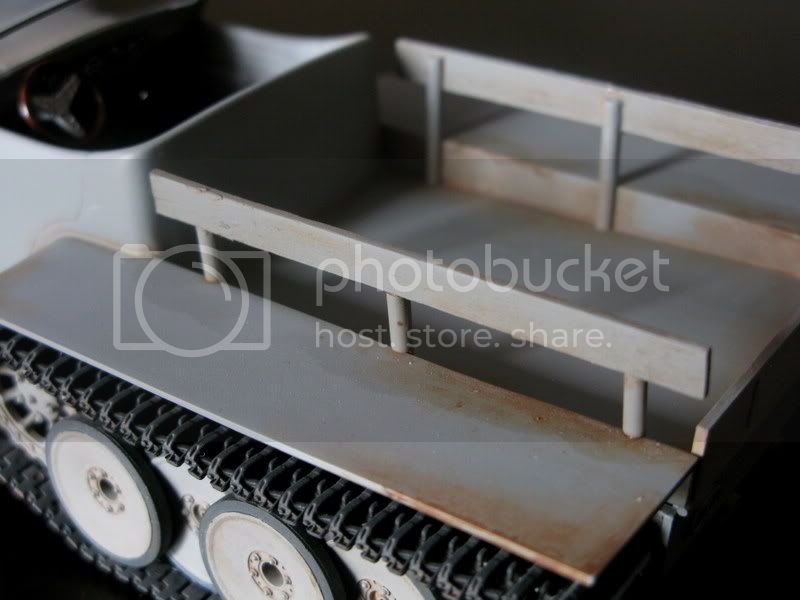 If it can't be modified, then what's the point?

I love how the tracks came out..a big improvement over the kit's offerings. Has a LaSalle kinda look to the fenders. Don't forget the slit covers over the headlights...those googley eyes pieces one can find at a craft shop with the back cover carefully removed should do ya!
-I say I have two kids- one son & one daughter...my wife says she has three- one son ,one daughter and one husband.

WWW
windysean (Sean Hadfield) said
Excellent work. You made a respectable, realistic vehicle out of this crazy car (with all respect to the original artist). The finish is very believable. I didn't know when I saw this that you had reworked the tracks-- well done! I really like it.
...And sorry, Bob, for always following you.

WWW
KoSprueOne said
very resourceful build. I love it! Great work with all the mods and scratchbuilding

yes I'd like to see a WIP thread right here in "Scratchbuilders!" forum

PROFILE
retiredyank (Matthew Nethery) said
Can tell a lot of work went into this. Kind of reminds me of a high-speed scout car or artillery observation vehicle.
Ideals are peaceful. History is violent.

PROFILE
barkingdigger (Tom Cromwell ) said
Wow! Not sure what you'd call it, but I'd love to drive one! (It'd make parking in town a lot easier...

Now all you need is an NCO behind the wheel in a Hawaiian shirt...

PROFILE
PunyViking (Kjell) said
Thanks for great comments! There was a lot of work to get to this stage, need to put on some markings on the doors, but my printer doesn't work so I can't make the maskings yet...

Cool...Rommel's grocery getter!
I love how the tracks came out..a big improvement over the kit's offerings. Has a LaSalle kinda look to the fenders. Don't forget the slit covers over the headlights...those googley eyes pieces one can find at a craft shop with the back cover carefully removed should do ya!

Rommel's grocery getter! that was a good name for it! I have to put that name into the suggesiton box!

The tracks on the original was a poor looking piece of sh... What is a LaSalle kind of look?
And no! There is not going to be those horrid looking slit covered headlights on this ride!

very resourceful build. I love it! Great work with all the mods and scratchbuilding

yes I'd like to see a WIP thread right here in "Scratchbuilders!" forum

Wow! Not sure what you'd call it, but I'd love to drive one! (It'd make parking in town a lot easier...

Now all you need is an NCO behind the wheel in a Hawaiian shirt...

Parking would not be a problem, but this thing is wide so driving it to town would be difficult! But then again, other cars would move or be flat...

My NCO doesn't get room behind the wheel, so I might make a co pilot, and Hawaiian shirt, no, I'll have to do better than that I think....

I think I have to make some kind of clothes for my copilot, I think her name is Helga von Wüste? (I don't know a word German, but I think the name is right.) 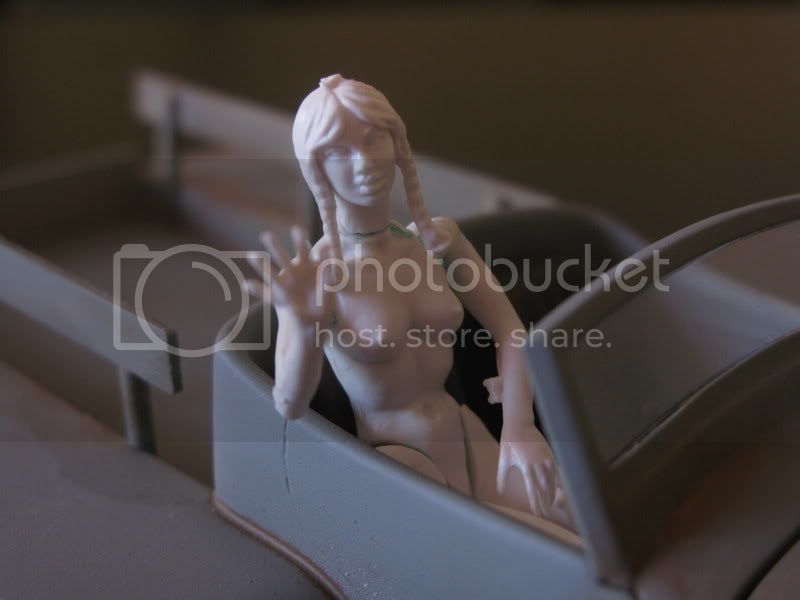 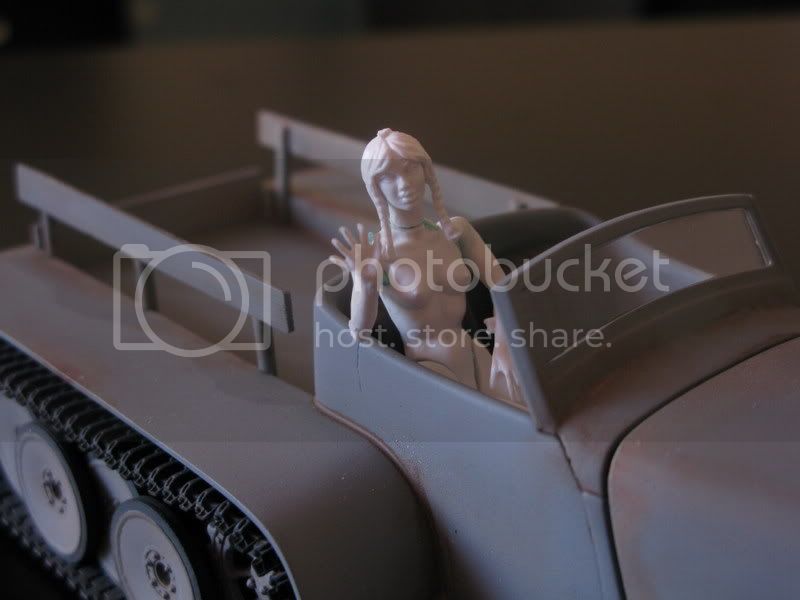 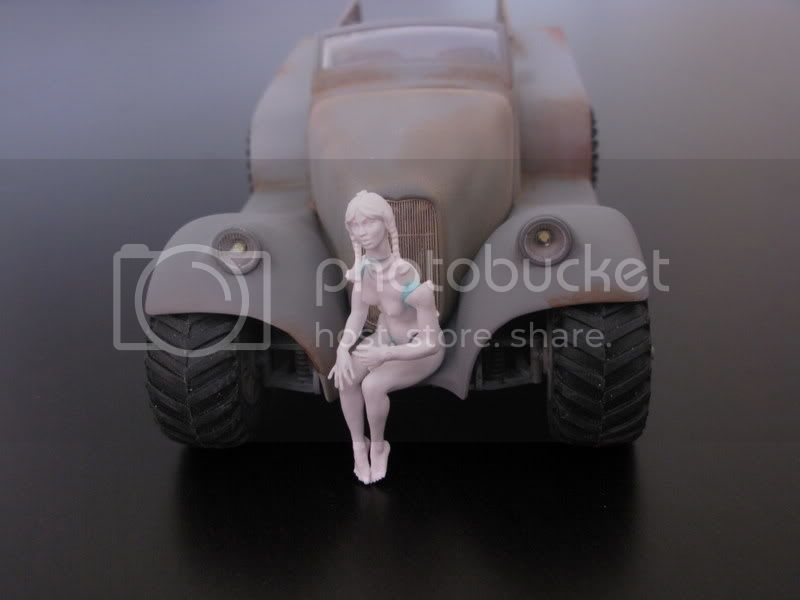 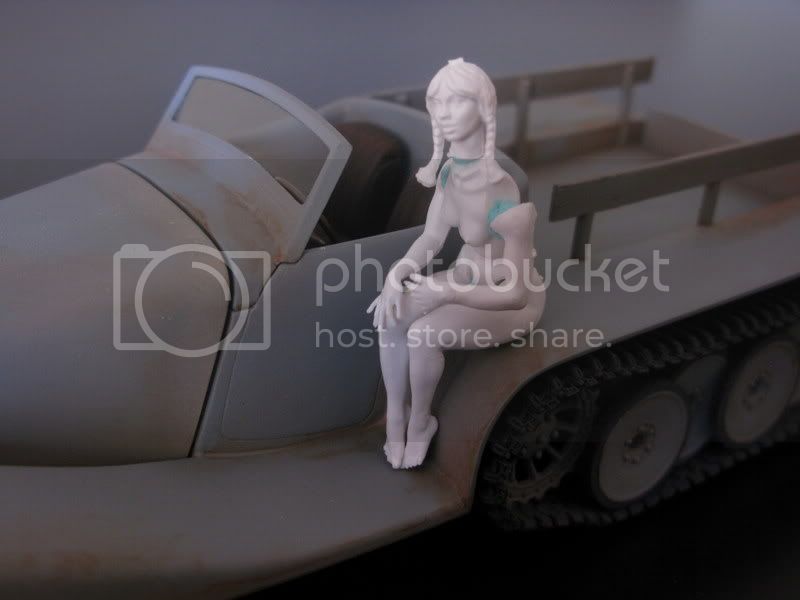 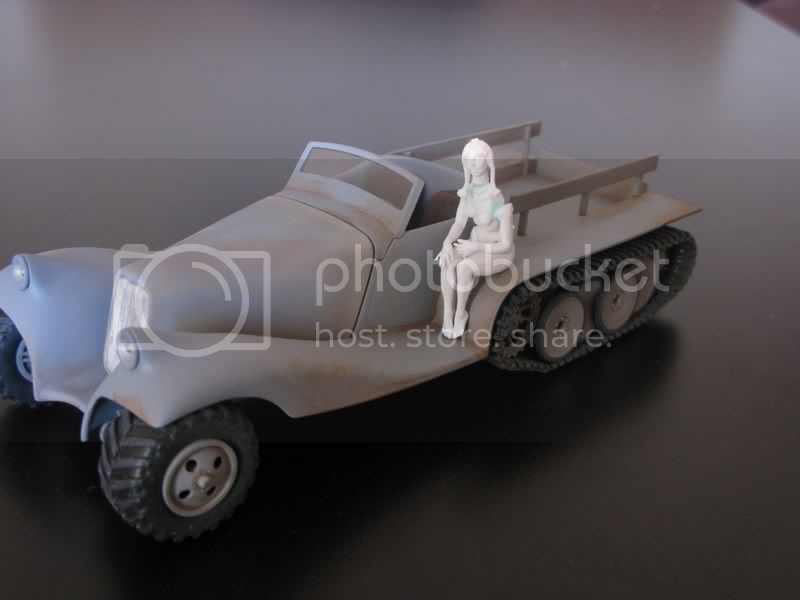 If it can't be modified, then what's the point?