Modeling in General: Advice on...
Need some general advice? Place it here.
Hosted by Jim Starkweather
How do you manage your model inventory?

PROFILE
gortman (John Rishea) said
I haven't built models since my high school days but am interested in getting back into it again. I mentioned this renewed interest to my wife and she wondered what we would do with the models once they were finished. Great question! So for those of you who have been doing this for a while, what do you do to keep your completed models from taking up more and more storage space? I've seen some folks selling completed models on eBay, but is that typical? Any "model inventory managment" ideas you can share with me would be appreciated.

Sadly, the few I have completed are packed away after several moves over the last few years. I've got one shelf in a bookcase at the moment with the 2 kits I have finished in the last year. Some serious models have glass bookcases to store them in, I've even seen a few snag glass display cases from retailers for their collection.

As to my unbuilts (way too many) I've recently catalogued them and created a database using "Open Office.Org". You could get similar value out of a regular spreadsheet. I've seen some shareware stuff out there, but it costs as much as a kit or two to get a real copy. YMMV

PROFILE
BillGorm (Bill Gormley) said
John - First of all, welcome back to the hobby. I was in the same position as you about a year ago and I'm glad I started modeling again. It's satisfying, there's always room to improve, and it's cheaper than many other pursuits (assuming you keep the ol' stash under control). Regarding built models, a far better modeler than me suggested that I get rid of what I build so that I keep pushing myself to improve rather than referring back to what I've done. Sounds harsh and the approach probably isn't for everyone, but I plan to keep it in mind going forward. Just my two cents ...

PROFILE
pseudorealityx (Jesse) said
I had a similar question less than a year ago when I got back into the hobby as well.

WWW
Tojo72 (Anthony) said
I have been building steady for 13 years now and have accumulated about 80 builds mostly 1/48 armor and a/c,1/35 armor and a few 1/350 ships.I have half my besement dedeicated to display.I have aquired various curios and cases.So far I still have more then enough room.I'm sure that as more time goes on,and if I keep improving,I probably will have get rid of some of the oldest ones that don't measure up to current stndards to make more room..

here are some shots of my humble builds:

WWW
HeavyArty (Gino P. Quintiliani) said
I have been modeling pretty steadily since high school (over 20 yrs). The ones I like, I keep on shelves in a spare bedroom. I also have a bunch of Artillery models in my office at work.

From a few years ago, as an example. Many of the ones in that pic I no longer have (like the afore-mentioned IDF models). 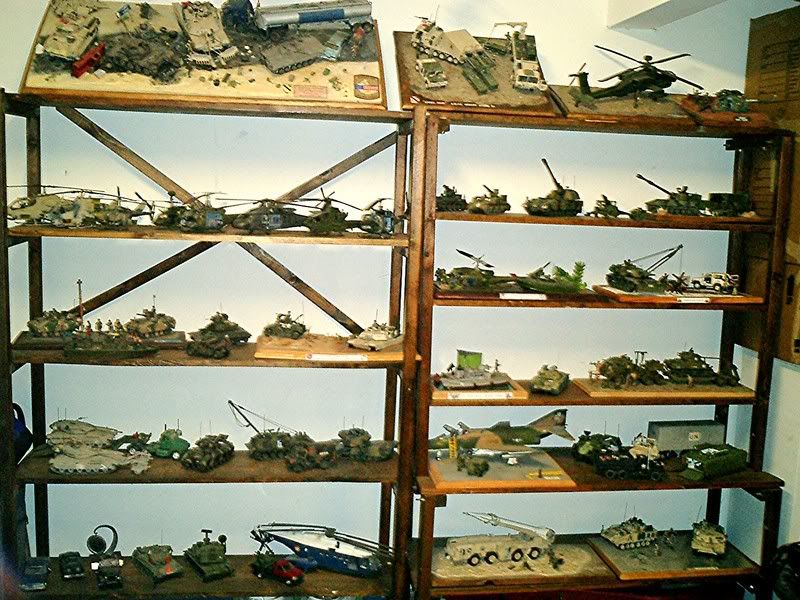 I have sold a lot of built models over the years on eBay as well. At one point I had a large number of built IDF models and decided I wasn't going to build IDF any longer. I sold them all on eBay for a nice chunk of change. I have also parted out a lot of my early builds as well to use as scrap/spare parts or when they become too damaged in a move to fix.

With the number of small businesses closing display cases are pretty easy to find. I bought 5 sold 3,got my 2 basically free.I rotate the models and sell some on feebay,some are stored. I have a nice basement of which the wife & I share for our hobbies.

Accounting is done with the Mark I brain & eyeball, I tried the paperwork thing but quickly got bored as it cut into building time. I have been fortunate over the years to be able to collect & build a fair amount of ok models

I have found this hobby to be a great stress reliever personally and a wonderful way to meet some really nice people. So welcome back & most importantly HAVE FUN.

You are what you are cause that's what you wanna be
The maximum effective range of an EXCUSE is 0 meters!

Gino, nice collection of choppers for an artillery guy.

PROFILE
Brightonrock (Alan Walker) said
My completed kits are forming loft insulation.
I build aircraft wheels up, so I can keep them in a growing number of boxes in the loft, away from danger

Besides that I keep a spreadsheet of my collection. The unpurchased are colour coded depending on whether they exist or are already available but not yet bought.
I had a target to complete my collection and stop but the list is till growing and the loft is under threat of clearance one day but 'she' cannot get up into it

PROFILE
gortman (John Rishea) said
Thanks all for the warm welcome and advice - both appreciated. Luckily we have a basement that my wife rarely frequents so I think I can use some of your suggestions without drawing "friendly fire" if you know what I mean.

Jakes, Mark 1 mod 0 memory is failure prone. Too many duplicates. Had t go to paper.

Gino, nice collection of choppers for an artillery guy.

Hi Mark,
Mine is too,so like the wife says "must be like Christmas every day for you", and sometimes it is......HO,HO,HO
After teaching for 21 yrs & 27 in the military I really despise paperwork, so I can live with the Christmas thing (some days it's kinda cool)

You are what you are cause that's what you wanna be
The maximum effective range of an EXCUSE is 0 meters!

PROFILE
jaberwaki (craig ebers) said
i have the same problem thanks to all who replied for the ideas.

Had those days, they're not too bad. What bothered me more was buying AM for kits I didn't have or not knowing what was on sale was what I really wanted.

WWW
MrMox (Jan Klarbæk) said
Try Ikea, if you got one nearby - they have some different nice glasscabinets to a decent price.

PROFILE
jimb (James Bongiovanni) said
I use the Lowe's shelves as well. I like the ones that have no visible brackets. Like this one: 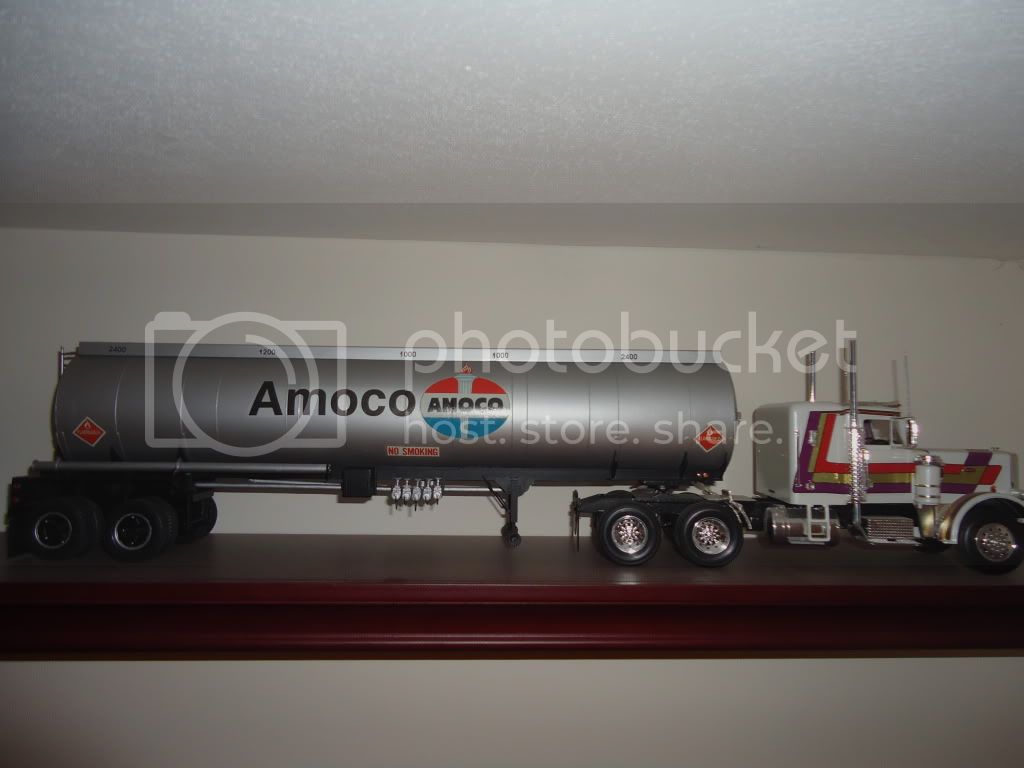 "Socialism is a philosophy of failure, the creed of ignorance, and the gospel of envy, its inherent virtue is the equal sharing of misery." ---- Winston Churchill