PROFILE
miteco20 (Mike McCarthy) said
I have a guy here at work that is looking for the quietest compressor out there and money is not an issue. I knew that this had to be the best place to ask. Any one with some ideas. Thanks in advance!

WWW
matt (Matt Leese) said
I've got an old "Dental compressor" I rescued from getting Junked.... (the tank was shot) you'd almost never know it was running. if he want's a totally silent option suggest CO2

I get my bottle filled for about 15 bucks and it lasts me quite a few models.

I have a guy here at work that is looking for the quietest compressor out there and money is not an issue. I knew that this had to be the best place to ask. Any one with some ideas. Thanks in advance!

For ultimate in quiet...go with a CO2 setup. Zero noise! No line moisture issues either.

PROFILE
MLD (Mike D) said
Coming in late to the party, but run, don't walk to the welding supply store (some folks have the luck of an airbrush store, I don't. Some have homebrew suppliers too, not up here) and get the scuba sized c02 tank and a dual guage regulator.
Best $200 I ever spent, tanks last forever (1-2years or steady tank painting) and refills are cheap, $20-25.

it's a no-brainer, really.


If you can keep your head when all about you are losing theirs,
perhaps you've misunderstood the situation.

PROFILE
Moezilla (Maurice Fitzgerald) said
I just picked up an Iwata Sprint Jet from someone getting out of the hobby and it's about as loud as the refrigerator. It serves the purpose I wanted it for well, to get out of the hot damned garage and paint inside where it's nice and cool. lol

you guys do know all iwata except the shark are oil-less? Apart from being noisy, they start to die the moment you turned them on, plus iwata uses some of the cheapest regulators on the market....

Do yourself a favor and get a oiled lubricated articulated-piston compressor. If you can notice when it's pumping air into the tank, it's on the loud side.

I picked up this Silentaire dr-500 when Ebay first started (97?) for 300 bucks, and I've turned it off two or three times, once when I moved. Mainly because it's so quiet I kept forgetting it was on. The regulator let out no air when it's shut off, so I just gave up turning it off at one point, it would never turn on unless I'm actually using it anyway.

I second this. If money is not an issue take a look at the Silentaire lineup & take your pick. I got the 20A very recently & it's amazing.

Brian, believe it or not home made compressors won't explode in your face. I have made 2 so far using similar instructions to the ones posted by FJcabeza: 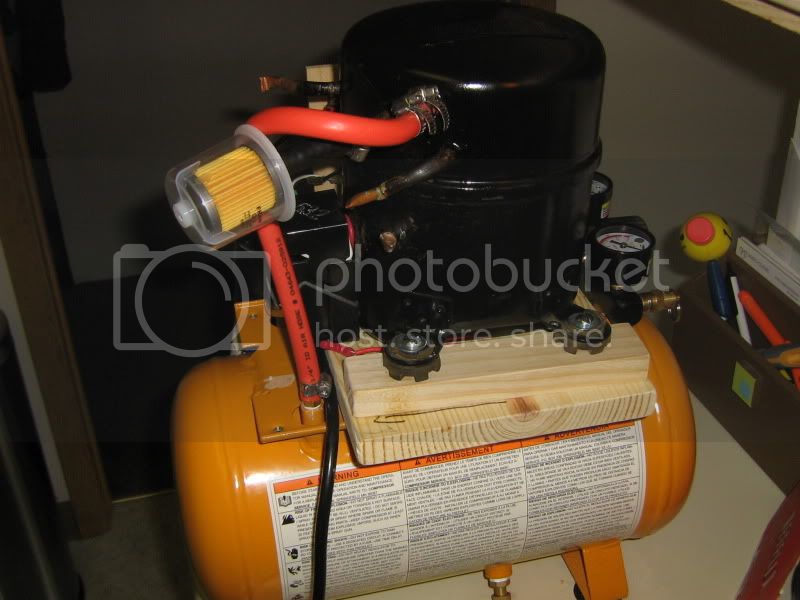 I did not used any type of welding at all, only couple of high pressure pipes and the tank of a BROKEN old piston compressor...=) Total investment about 30$ and about 2 hours for putting it up together.......

So I have a wife that equates scuba tanks full of C02 with nitro-glycerin actuated hydrogen bombs...

Assuming those parameters would a Silentaire I-W be a good buy?

What's a good (quiet) compressor for on or about 200 bucks? My only concern is that it's oiless and I'm not sure how much I like that idea.

Building all the models.

I was going to buy an Iwata Pro Jet unit and saved a bundle and have a better compressor.