Scratchbuilders!
Built a model or part from your own materials lately?
Hosted by Mike Kirchoff
I Want To Ride My Tricycle...

PROFILE
ZETMAN (Zisis) said
Hello from Greece!I would like to share with you one of my recent projects.The matter is for the photo below and whole costruction is made from scratch in 1/35: 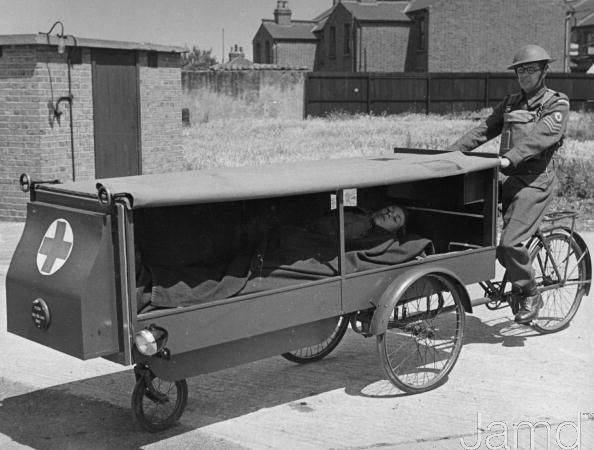 It cought my eye,and loved it from the first sight.It is a scratchbuilt ambulance used by Home Guard in Home Front in 1939 and then,borrowing the main vehicle probably from royal mail vehicle.This kind of transport was used far since 1939(some 1910 brochoures were found in net)and used by RM,ice cream sellers,or cargo.
My first steps using as a base the wheels of tamiya german bicycle set,voyager photoetched parts,plastic rods,styrene,and a lot of patience. 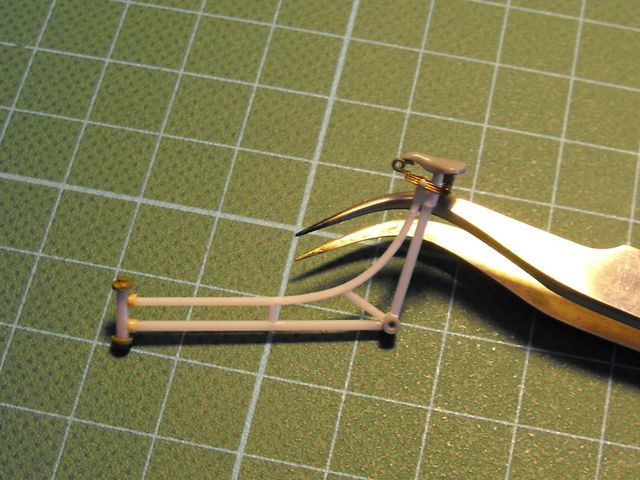 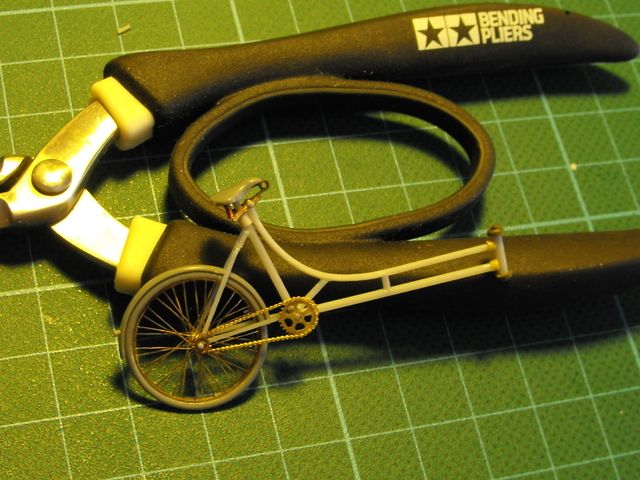 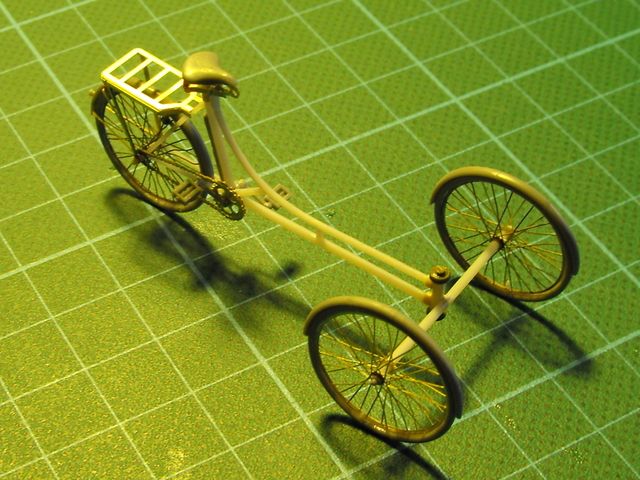 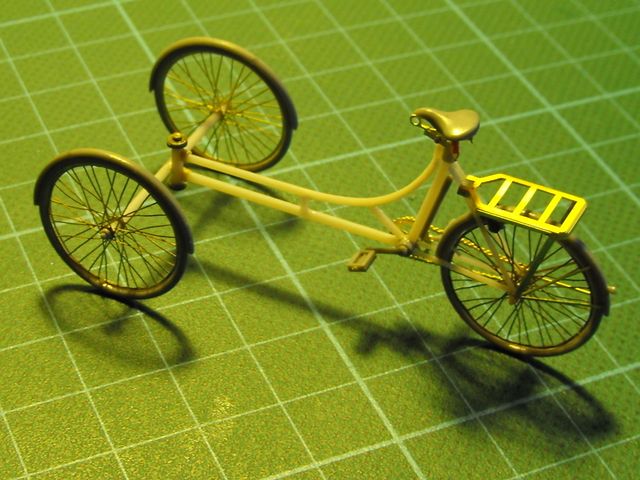 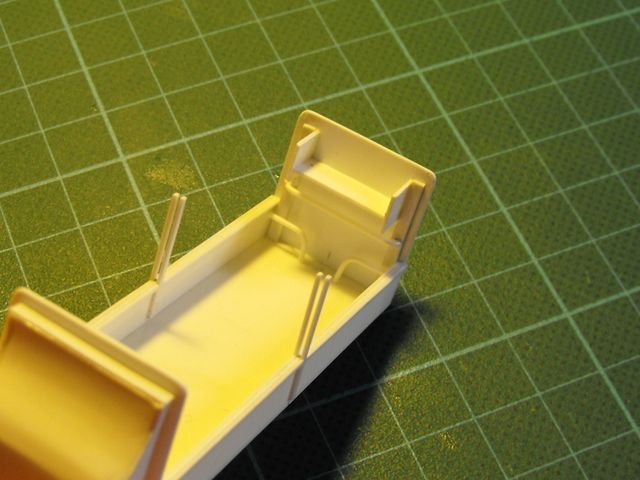 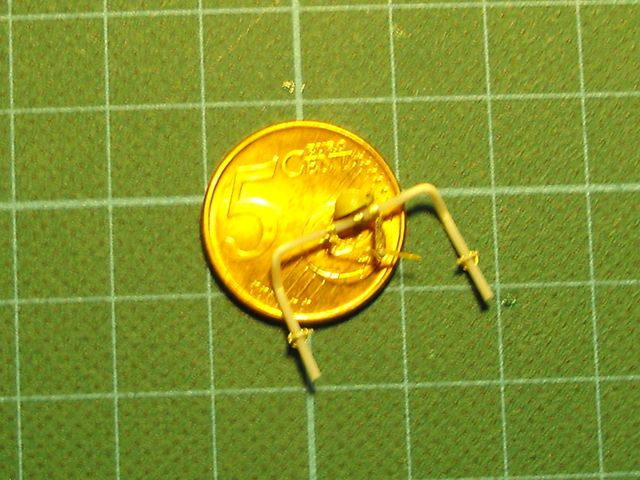 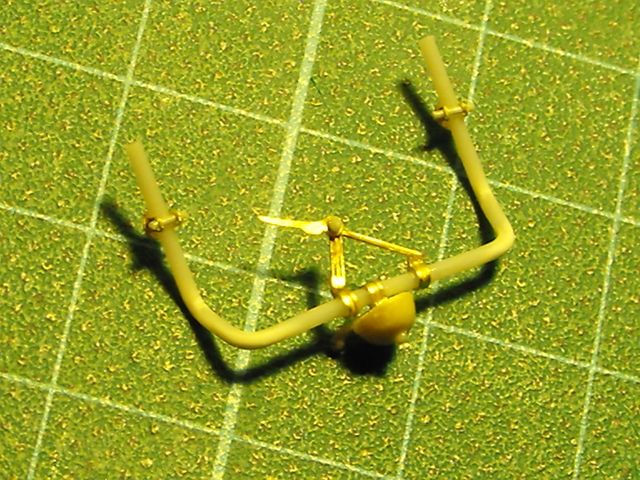 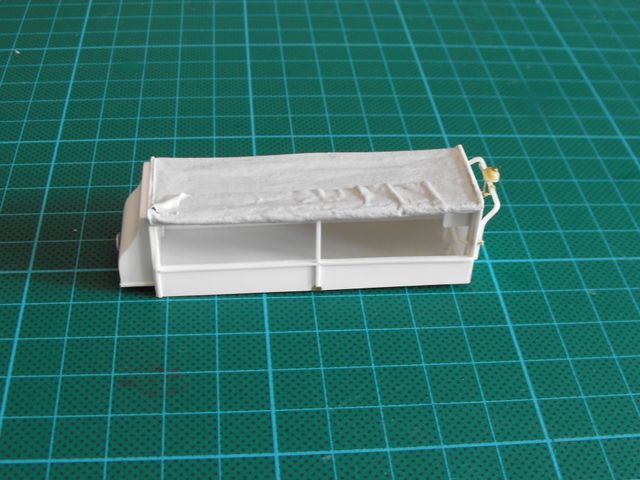 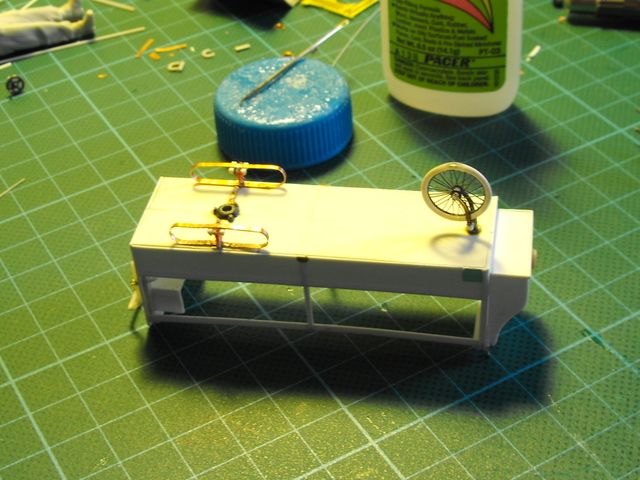 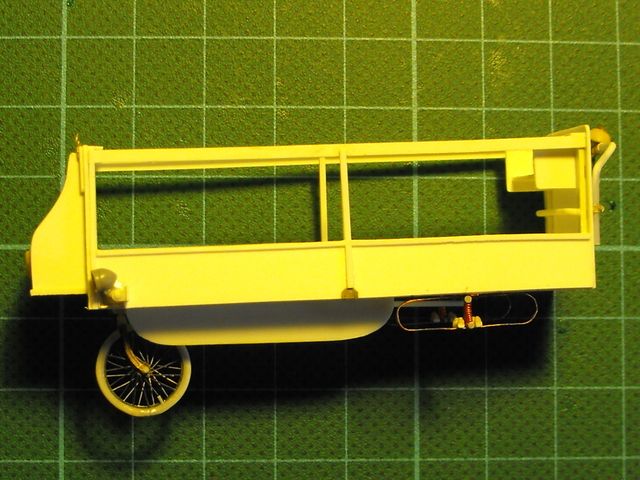 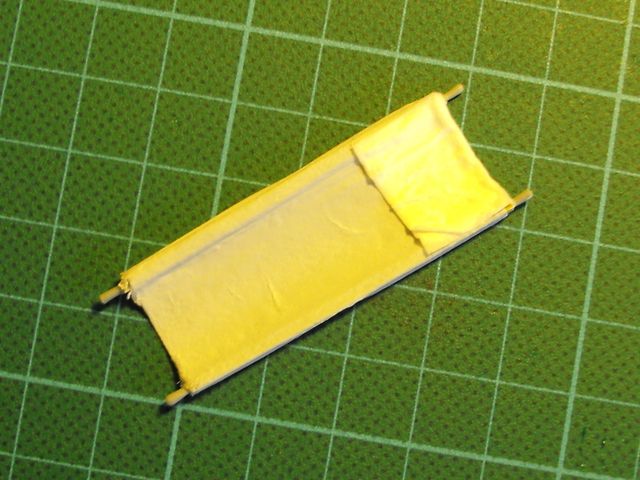 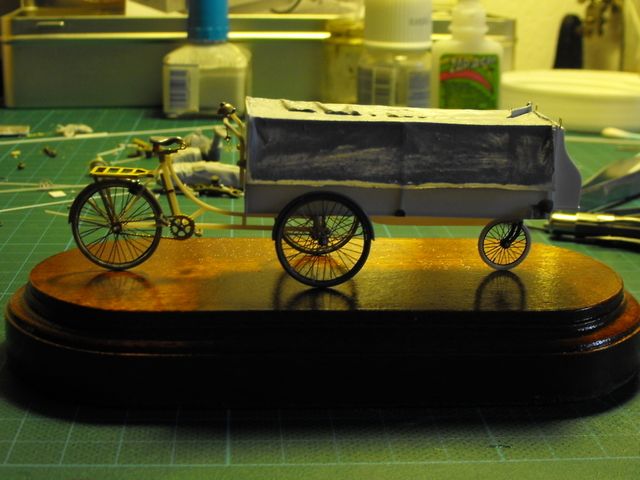 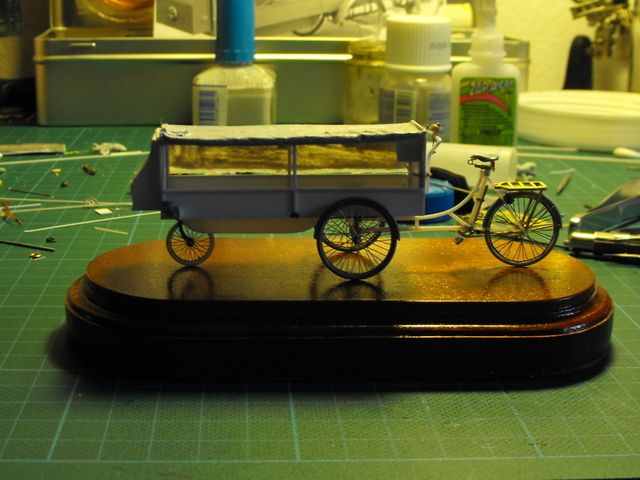 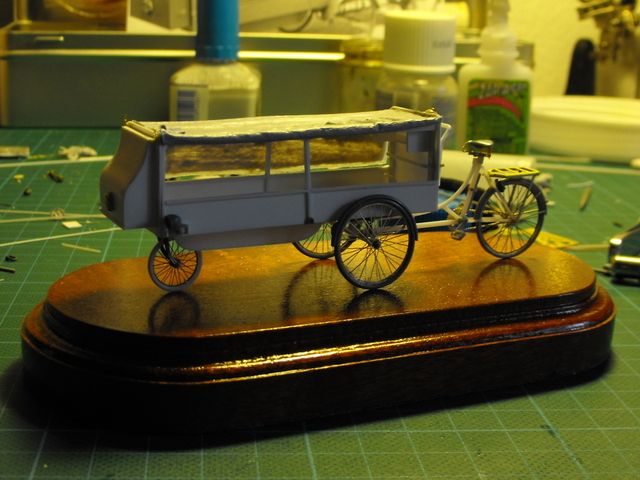 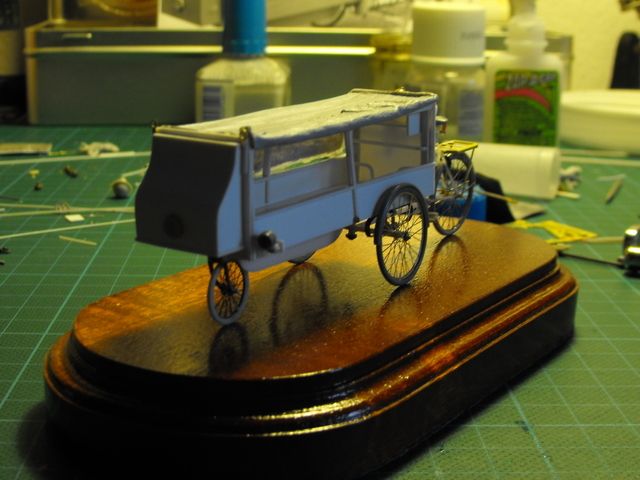 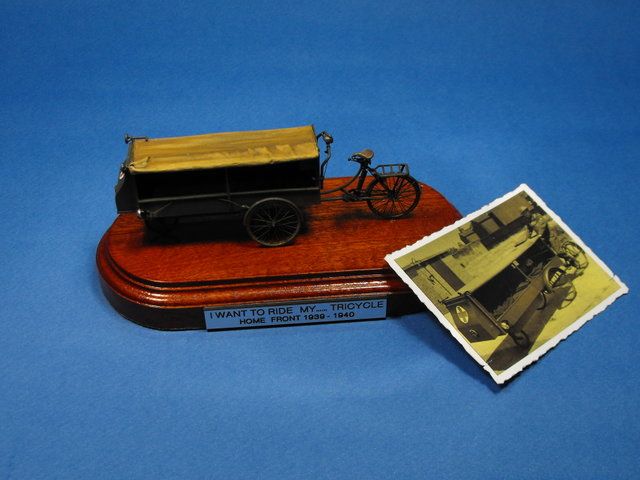 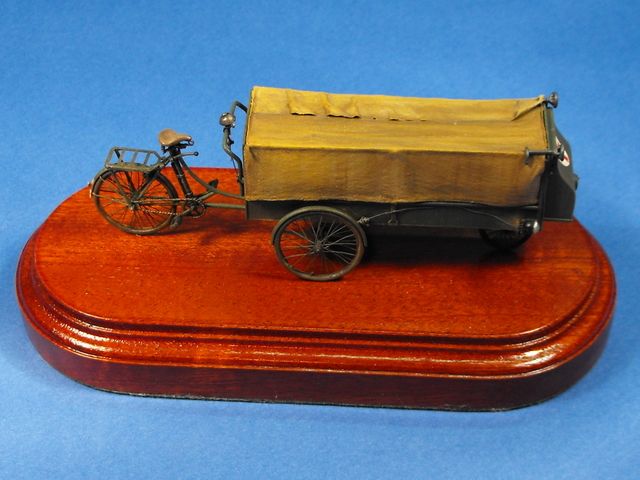 Awarded with bronze in Euromilitaire last week.
Thank you for watching.
Regards,
Zisis

PROFILE
slodder (Scott Lodder) said
If that only got bronze I'd like to see gold and silver.

Thank you for sharing with us.

PROFILE
firstcircle (Matthew Lenton) said
Brilliant Zisis. A thing of beauty. I think you need to make sure you keep the dust off it.

PROFILE
CReading (Charles Reading) said
A really neat build of a pretty unique subject. I would have given it a gold for originality.
Very cool.

How did the rider steer it?

yes, how was it steered?
How did you make the front little wheel?

PROFILE
ZETMAN (Zisis) said
First of all I would lke to thank you all for your comments.I am really flattered.
The front wheel was made by rolling up a a sprue round a pen,gluing it with cyano and let it dry wrapped in tape in order to take shape.Then add two pieces of photo etched spokes from an eduard set of WWI wheel wire discs.
The rider could manovre it by turning simply the steering wheel,in the main two wheel axle,there was a beam stuck in the left side.under the carriage which ended in the front whel in a ring.
so when you turn it wright the beam went back,so turn the front wheel back and tuurn right.
respectively when you turn it left,the beam went forward pushing the front wheel from the left side to turn it left.
My son who is two years old has a mini tricycle with a similar mechanism and a beam behind the trike in order to drive him until he can on his own.
That's all .

WWW
jba (Jean-Bernard André) said
Zisis you've got all my congratulations, I really love your fine job!
"too much colour distracts the viewer"
Jacques Tati

PROFILE
ZETMAN (Zisis) said
Jan.
It's my honour to see comment of yours.I really admire your work very much and you are inspiration for all of us.Expecting to see you in Euro and admire your models live there.Wish you could have come.
Thank you very much,
zisis

PROFILE
thegirl (tripping the rift) said
I cycle to and from work everyday , 10 K and love it ! Nothing like riding !!!

So I really appreciate the quality of craftsmanship you put into such a neat subject !


and yes , I would take it for a spin

would be able to bring home a lot more stuff from the hobby shop then I can with my .

!!!!! Like Scott and Charles, I,too, would have given it a Gold award for outstanding originality alone

. Thanks for sharing and cheers !
Kenneth

PROFILE
ZETMAN (Zisis) said
Thank you all for your comments.I am really flattered.