with real looking tanks and not just paper ones.

IL2 Sturmovik: 1946 , quite obviously, is a flight simulator. The definitive IL2: 1946 version has been out for some time and isn't a grand investment. I've seen it being sold for around 15. Now that's value for your money! On a single DVD you get the whole series: Forgotten battles, ace expansion, pacific fighters, sturmoviks over manchuria, the Pe-2 addition as well as the new "1946" content.
If you're into combat flight simulation, you need to get this.

The place for my favorite 1st person ww2 game goes for
Hidden & Dangerous 2.
I've played and enjoyed the most popular ones, Medal of honor and Call of duty series, and yes indeed, they're cinematic and impressive and fun the first time around, but I feel their lacking replay value, something which makes H&H2 such an awesome game, IMO.
I also like the realism and tactical approach of it. Perhaps the best thing about is the freedom. It's no Operation Flashpoint (which btw would be on my list, but you asked for ww2 games, which OFP isn't without mods) naturally; you still get the usual objectives to accomplish and you have to keep inside the map boundaries, but the lack of tightly-scripted action and the feel of walking in a tunnel (and having that compass pointing to the current objective!) is really refreshing.


Commandos 2 - Men Of Courage
To me, this game is the pinnacle of the series.
The first one (Behind enemy line) was good, but I remember later bumping into a ridiculously hard stage and kind of lost my interest. The stand-alone expansion (Beyond call of duty) that followed has probably the most insane level of difficulty I've ever come across. I struggled through the first stage, and realizing it wasn't going to get any more reasonable, gave up on it. Not my impression of fun time spent gaming.
But Commandos 2...

I think Pyro Studios hit the bullseye on this one. Awesome graphics, great music and interesting & challenging missions make one superb game. The difficulty level is spot on. They got it all right here.
One thing that I've seen people getting wrong with this game is that they assume it's a real-time action/strategy game and play it like that, and finding it unbearably hard. While it may look like it, Commandos 2 is more of a sneaker / stealth game where you rely more on silent feet, a Fairbairn-Sykes fighting knife, and concealing subdued/killed enemies instead of full-frontal assaults with all guns blazing.


And while where talking about the Commados series...
[useless venting]
But why, why did they have to go and ruin the perfection achieved in Commandos 2?

What on earth went on in their brilliant Spanish heads?
Among the truly original and necessary innovations of Commanos 3 were:
- fix the screen resolution to 800 x 600 without options
- get rid of all the fancy hotkeys to weapons and equipment! (a thing that made the second instalment so enjoyable)
- make the levels smaller (the main levels in Commandos 2 ranged from large to huge) and shift the focus of the game more on straightforward action, running and shooting around

I just don't get it. Commandos 2 was a success and they just flush it down the drain when doing the next one. I would have been happy if they had just made expansion discs with more missions. (and I bet a lot of other people would have been as well...)
To this day, I haven't even tried Commandos 3.

Guess what happened then. The next Commandos instalment was a FPS game...

hi jeff
what format are you using pc or consol????
neil

Thanks all I saw somebody posted a screen from one awhile back and looked great,but cannot find it now Panzer III taking on a Sherman I think it was.
Really looked great.

try out any of the call of duty games they havent got any tanks in them but the online first person battles are widely known as the best shooter games on the market.
i'm on 'cod 4 moden warfare' at the moment and it realy is very addictive + they've got a new version out this side of christmas set in the wwII pacific theatre.......
all the best
neil 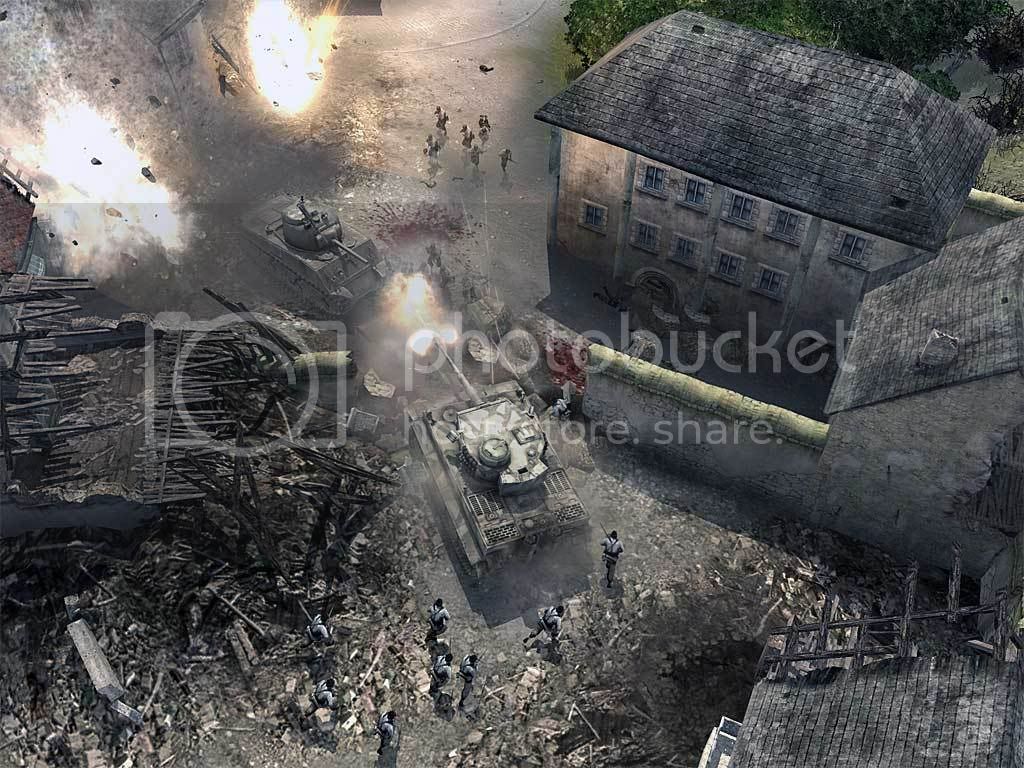 PROFILE
sgtreef (Jeff) said
That is more like it.

Wonder if it will run under my system a year old or so.

Wonder if it will run under my system a year old or so.


A year old PC? I think it should run OK. The game came out in the fall 2006.
Check out the system requirements here:
http://en.wikipedia.org/wiki/Company_of_Heroes

PROFILE
lespauljames (James Cann) said
It really is worth it. Im waiting for my new pc to arrive and i have been able to put the graphics on my old pc nearly to maximum. Pick up the direct x ten version if you can, and its worth getting opposing fronts as it adds 2 campaigns and that will keep you busy for monthis. Adding british and commonwealth forces and panzer elite to the standard choice of american and german. And its best played loud. If you you have a sub woofer , Crank it up and the explosions will rumble your house
Support Our Troops! Hit the Yes button If you find reviews or features helpful.

PROFILE
HastyP (Paul Seabrook) said
YOu have sold me on Company of Heroes, going to get it this week.

So much plastic...So little time...