Tools & Supplies
Discussions on the latest and greatest tools, glues, and gadgets.
Hosted by Matt Leese
Why does noone talk about using MEK?

WWW
RottenFuhrer (Andrew Leeth) said
Just curious as to why noone talks about using MEK as an adhesive. Its nearly instantaneous, inexpensive in Large quantities, and easy to put on. Its not without its disadvantages though; dangerous vapors and highly flamable. It sure speeds up construction time!!
Please check out my YouTube channel!

ts not without its disadvantages though; dangerous vapors and highly flamable

I think that you have just answered your question there...

Most of use need to share our modelling space with others, and they usually don't like the smell as much as we do.

The early bird may catch the worm, but the second mouse gets the cheese...

PROFILE
ws48 (Don Seabrook) said
I use MEK not only as an adhesive but for cleaning my airbrush. Since it will dilute both enamels and acrylics and the solvency is the highest of any available solvents MEK purges my airbrush better than anything else. I should note that I have a dedicated hobby room and a spray booth.

PROFILE
Uruk-Hai (Janne Nilsson) said
Theres a product commonly used here in Sweden known as Ethylis Acetas thats is the best and one of the less toxic products that we use.
The chemical formel should read: CH3COOC2H5

Unfortunatly I dont know of the transatlantic or other equivalents but perhaps some questions at the local pharmacy could sort it out? Its already used in plastic glue and nailpolish remover.

PROFILE
CMOT70 (Andrew Beard) said
The main ingredient of most of our liquid cements actually is MEK anyway. So we are using it in effect.
Current Projects:
Eduard 1/48 F6F-3 Hellcat
Hasegawa 1/350 Yukikaze
1/6 JJ Models Sarah "Gothic"

PROFILE
footsie (tony clark) said
thats all i ever use we get a free and ready supply of the stuff at the club , i cant see me using anything else now , dries quick and great for cleaning the airbrush too. also works well for getting a cast texture on armour. 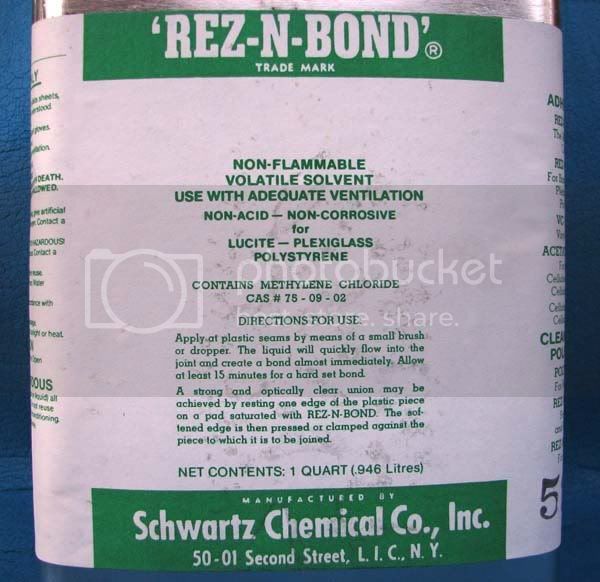 Just curious as to why noone talks about using MEK as an adhesive.

Because they're all dead!

Seriously, pure MEK is very bad for all your mucus membranes and highly carcinogenic.
I wouldn't spray MEK unless I was in a full haz-mat suit with a closed breathing system and I wanted to kill my wife.

I thought the main ingredient of my polystyrene cement (which is Humbrol) was butyl acetate, which is a slightly smaller molecule than MEK (and is also found in apples - go figure). MEK is very different from methylene chloride, which is a very simple derivative of methane.

As for toxicity ... I've read that MEK has killed no-one and only causes birth defects in quantities large enough to give you problems for completely different reasons. On the other hand, that was on Wikipedia... My watchword is that if your eyes water when you sniff the bottle, take care; and if spiders start falling from the ceiling, find an alternative.

PROFILE
footsie (tony clark) said
[quote] if spiders start falling from the ceiling, find an alternative. best bit of advice i ever heard,

Just curious as to why noone talks about using MEK as an adhesive.

Because they're all dead!

Seriously, pure MEK is very bad for all your mucus membranes and highly carcinogenic.
I wouldn't spray MEK unless I was in a full haz-mat suit with a closed breathing system and I wanted to kill my wife.

Matt, buddy, you just gave me a great idea !

PROFILE
Finch (Danny Egan) said
The authoritative source of data on any chemical is the MSDS - Material Safety Data Sheet. You can find the one for MEK by (you guessed it) typing "MEK" into google. You will find that it is pretty dangerous stuff, as Matt Toms said. But don't take my word for it, go read the MSDS yourself and please take proper precautions if you do decide to use it. If you aren't sure, find a friend who is a chemist or industrial hygenist and ask.

I haven't had to use mine yet but with a liter of laquer thinner in there I feel like it's a matter of time !

While my 2 oz. bottle of Testor's cement contains some MEK, I don't want a quart can of it down in the basement with me by the gas furnace and gas hot water heater (pilot lights).
While I am all about cheap, I like my nervous system the way it is, even after a few gin and tonics.

WWW
SSGToms (Matthew Toms) said
From the MSDS:
"Aspiration into lungs can produce severe lung damage and is a medical emergency."
"Higher concentrations may cause central nervous system depression and unconsciousness."
"Chronic exposure may cause central nervous system effects."
"For emergencies or instances where the exposure levels are not known, use a full-facepiece positive-pressure, air-supplied respirator. WARNING: Air purifying respirators do not protect workers in oxygen-deficient atmospheres."
And you guys are spraying this stuff through your airbrushes????!!!!!!!
NO NO NO NO.

WWW
JPTRR (Frederick Boucher) said
Here's a bunch of info I have on MEK from discussions years ago:

Many things, correct and incorrect have been stated on this list about MEK. Lets not go by memory (which may be affected by MEK) and instead go to an authoritative source, a Material Safety Data Sheet. There are various sources available on the web, an easy one is:http://www.jtbaker.com/msds/m4628.htm Relevant portions include: DANGER! EXTREMELY FLAMMABLE LIQUID AND VAPOR. VAPOR MAY CAUSE FLASH FIRE. HARMFUL OR FATAL IF SWALLOWED. HARMFUL IF INHALED OR ABSORBED THROUGH SKIN. AFFECTS CENTRAL NERVOUS SYSTEM. CAUSES IRRITATION TO SKIN, EYES AND RESPIRATORY TRACT.
Health Rating: 2 - Moderate
Flammability Rating: 4 - Extreme (Flammable)
Reactivity Rating: 2 - Moderate
Contact Rating: 2 - Moderate
Lab Protective Equip: GOGGLES; LAB COAT; VENT HOOD; PROPER GLOVES; CLASS B EXTINGUISHER
Potential Health Effects
Inhalation: Causes irritation to the nose and throat. Concentrations above the TLV may cause headache, dizziness, nausea, shortness of breath, and vomiting. Higher concentrations may cause central nervous system depression and unconsciousness. Skin Contact: Causes irritation to skin. Symptoms include redness, itching, and pain. May be absorbed through the skin with possible systemic effects. Eye Contact: Vapors are irritating to the eyes. Splashes can produce painful irritation and eye damage. Farther down one will find that MEK is not now recognized nor anticipated to be a carcinogen. However, it has shown reproductive teratogenic effects in laboratory animals so keep an eye on you kids.... Bottom line - avoid if possible, protect yourself if you feel you must use it.


I forwarded the above information to an MD, and here is the reply (NOTE: the MD references comments made above, that I edited out years ago) :

1) Custer's opinion that most teratogens affect only women is completely wrong.
2) Where did he get the statistic that 10 years is the required time to "metabolize anything in the body away"? Does the word mutation mean anything to him?
3) The "eggs" in the ovaries begin as oocytes in the primordial follicles, of which approximately 400,000 are present at birth, i.e, well before puberty. Oocyte maturation is then arrested at the time of birth, until follicular maturation prior to ovulation.
4) The suggestion that males have a protective advantage because they continuously produce sperm is wrong and dangerous. If the latest "crop" of sperm is affected by a teratogen (including alcohol) and that sperm is used to fertilize the egg, the embryo may demonstrate defects related to the damaged sperm. Many defects are due to teratogenic effects on the embryo and fetus and occur after conception, such as those due to thalidomide or radiation. Different teratogens affect the fetus at different stages of development; some that may have devastating effects in the first trimester may have no effect in the third trimester. This is dependent on the particular teratogen, which organ system it affects, how it affects that organ system and when that organ system is undergoing development.
5) What is Custer's definition of small amounts of exposure over time? What does he consider small and how does he measure this? How certain is he that these small amounts of exposure will have no effect and on what evidence does he base this? Fred, If you want detailed accurate information concerning teratogenesis and your own possible risks, get it from a physician who practices reproductive medicine. If you are concerned about possible hereditary conditions, ask the reproductive medicine physician to refer you to a geneticist. This sort of information should be as specific as possible to the individual(s) involved, and detailed exposure, medical and family histories are essential. An opinion from a lay person is dangerous...

The only thing necessary for the triumph of evil is for good men to do nothing. - Edmund Burk

WWW
rokket2001 (Wink Grise) said
I'm no namby-pamby PC wimp. I like my solvents. I've probably absorbed a liter or two of paint thinner over the years. BUT...

(I love that symbol)